Save the Cinerama Dome; Arclight Mourning; Black Mirror Does It Again 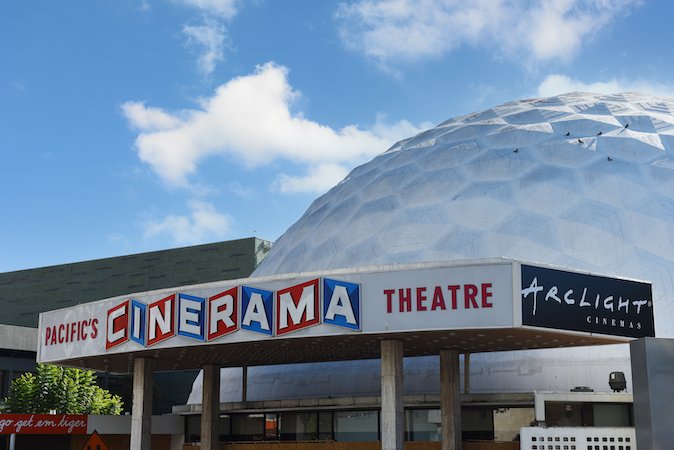 The Arclight theaters are closing, but we need the Cinerama Dome to survive; Harvey Weinstein is losing teeth and his eyesight, his lawyer says; Black Mirror was right about robodogs. All in today’s Movie News Rundown.

But First: College students can screen Promising Young Woman for free this Thursday. Here’s how.

Terrible News: Decurion, which owns the Arclight and Pacific Theaters, says the Southern California chains will remain closed because the company “does not have a viable way forward.” It adds: “To all the Pacific and ArcLight employees who have devoted their professional lives to making our theaters the very best places in the world to see movies: we are grateful for your service and your dedication to our customers. To our guests and members of the film industry who have made going to the movies such a magical experience over the years: our deepest thanks. It has been an honor and a pleasure to serve you.”

Can You Take 10 Seconds to Sign Up for This Newsletter?

Mourning: “This is heartbreaking,” tweeted Adam McKay. “Well this sucks,” added Rian Johnson. “Every single person who worked at the Arclight loved movies, and you felt it. Sending love to every usher, manager and projectionist who rocked that blue shirt and made it such a special place.” Adds Gina Prince-Blythwood: “This is so painful. The Arclight is my go-to. Clean, great sound, assigned stadium seating, great popcorn, usher movie introductions. A true movie-going experience.”

Ready to Go Back to Theaters? Here’s the case that with proper precautions, movie theaters are safe.

The Dome: The stunning Cinerama Dome at the Sunset Arclight location was the crown jewel of the chain, and its fare remains uncertain. It opened Nov. 7, 1963 to exhibit widescreen Cinerama films, and opened with It’s a Mad, Mad, Mad Mad World. Quentin Tarantino magnificently reimagined it hosting the film Krakatoa, East of Java in his 1969-set Once Upon a Time in Hollywood.

What Can We Do?: I can’t find any formal effort for people to get involved to preserve the Cinerama Dome — and ideally, keep it open as a theater. As Ross Lincoln notes at TheWrap, many people are hoping “someone” will do something to rescue the Hollywood landmark, and many want Tarantino to be that someone, given his outstanding work revitalizing the New Beverly Theater not far away. This seems like a rare case where tweets and other social media posts might do some good, by showing prospective buyers and preservationists that there’s a large audience eager to re-enter the dome.

We’ve Reached Out to Tarantino’s Reps for Comment: And will let you know what, if anything, we hear.

Today we found out the Cinerama Dome is closing. The very first movie to play at the Dome was, “It’s a Mad Mad Mad Mad World”. But today “It’s a Sad Sad Sad Sad World”. #SaveTheCineramaDome pic.twitter.com/HRVD8mDkr6

BREAKING: Cinerama Dome, the world's most iconic movie theater, is going to be shut down.

RT if you think Hollywood should rally together to save this American treasure! pic.twitter.com/dkPir8LD0A

Weinstein ‘Almost Technically Blind,’ Losing Teeth, Lawyer Says: Harvey Weinstein’s attorney, Norman Effman, is trying to delay his extradition to California, saying his client has two previously scheduled medical procedures in New York. He says Weinstein is “almost technically blind” and has lost four teeth behind bars. Los Angeles prosecutors have charged him with 11 counts of rape, sexual battery, and other crimes, according to the Daily Beast. Weinstein is serving a 23-year sentence in New York after being found guilty of rape and a criminal sexual act last March.

Black Mirror Does It Again: Video of a robot dog deployed by the NYPD has drawn lots of comparisons to the Black Mirror episode “Metalhead” in which such dogs hunt humans. Don’t worry! says the NYPD. “The NYPD has been using robots since the 1970’s to save lives in hostage situations & hazmat incidents. This model of robot is being tested to evaluate its capabilities against other models in use by our Emergency Service Unit and Bomb Squad,” the department tweeted earlier this year.

Nah they really got these robot police dogs in NYC. This is wild pic.twitter.com/iG7CTPFevH

Main image, above: The Cinerama Dome at the ArcLight Hollywood on Sunset Boulevard. Courtesy of Shutterstock.