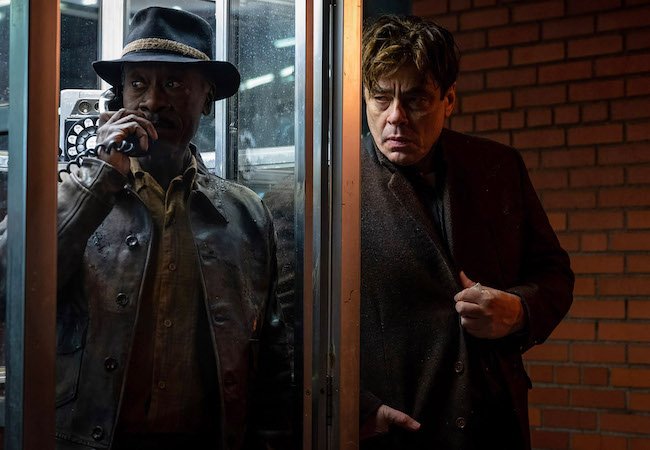 Steven Soderbergh will debut his latest at Tribeca — which is just the start of the good festival news; Arnold Schwarzenegger tells you to get back into theaters; R.I.P. Paul Mooney. All in today’s Movie News Rundown.

But First: Did that very awful Studio 54 air vent thing really happen like it did in Netflix’s Halston? Yes and no.

Soderbergh at Tribeca: Steven Soderbergh’s 1950s Detroit heist film No Sudden Move will be the Centerpiece Gala Selection of the Tribeca Film Festival one June 18, about two weeks before it arrives on HBO Max. It’s about Curtis Goynes (Don Cheadle), a man fresh out of prison who is dogged by a missing “code” book. He sees a way out of a deep hole when he’s hired to “baby-sit” an auto executive’s family. The cast includes Benicio Del Toro, David Harbour, with Ray Liotta, Jon Hamm, Amy Seimetz, Brendan Fraser, Kieran Culkin, Noah Jupe, Craig muMs Grant, Julia Fox, Frankie Shaw, and Bill Duke.

Soderbergh Says: “A year ago I was on lockdown in Tribeca, so I never imagined we could return 12 months later with a new movie screening for a live audience in our neighborhood. I’m VERY happy.”

Out of Sight: No one shoots a snowy Detroit skyline like Steven Soderbergh, as you may recall from 1997’s Out of Sight, another complicated heist film that prominently featured Don Cheadle.

‘Big Screen Is Back’: Hollywood ambassadors from Arnold Schwarzenegger to JJ Abrams welcomed reporters to an actual movie theater yesterday to make the case that “the Big Screen is back,” as part of the “Big Screen Is Back” initiative that emphasizes the more than 150,000 theater employees hit by closures, and stresses that there’s nothing like the theatrical experience. Those of you who already believe in the joy of the theatrical experience are excused from reading this enthusiastic writeup by The Hollywood Reporter and less impressed one by Variety.

So… Is It Back?: It’s up to us. When I think of the last year of watching movies on a phone or laptop or TV, dealing with a legion of passwords and logins and searching for old movies that take forever to find, I feel very comforted by the idea of surrendering to one giant screen, curated entirely by someone else, in a not-too-crowded theater, which was always my favorite way to watch. Remember when “I was in a movie” was your justification for not answering calls, texts and emails? The best excuse is back.

Nantucket: The Nantucket Film Festival just moments ago announced the schedule of in-person events for its 26th annual edition, June 17-28. The NFF Garden Series will include 11 “intimate open-air conversations and screenings at private residences across Nantucket” and audiences can enjoy eight screenings at the Dreamland Drive-In — including the opening night film, Questlove’s Summer of Soul, and the closing night film, Coda, by Sian Heder. Both were Sundance darlings. More information is at the festival website.

Fantasia Plans: Montreal’s Fantasia International Film Festival, one of our 50 Film Festivals Worth the Entry Fee, will return virtually from August 5-25 and be hosted on Festival Scope and Shift72’s screening platform. Physical screenings may be a possibility, but there’s no word on that yet — Quebec officials are being cautious. The festival also made its first wave of film announcements: This year’s festival will focus on the cinema of Japan, and also include the world premieres of Richard Bates Jr.’s King Knight, starring Matthew Gray Gubler and Edoardo Vitaletti’s The Last Thing Mary Saw. More details are at the Fantasia site.

R.I.P. Paul Mooney: The comedian, actor and writer has died at 79 of a heart attack. A collaborator with Richard Pryor who also wrote for In Loving Color (creating Homey D. Clown) and Chappelle’s Show, where he doled out advice during the “Ask a Black Dude” segment, also played Sam Cooke in The Buddy Holly Story and a brilliant Paul Mooney-like comedian who refuses to sell out in Spike Lee’s still-stunning Bamboozled. A 2010 Los Angeles Times story described his collaboration with Pryor, which began in the 1960s: “Pryor was a self-loathing, drug-addicted genius, Mooney an industrious teetotaler, but they bonded over laughs and a distrust of the white Hollywood power structure.” Above all, Mooney just told the truth as he saw it. Here is a crucial scene in Bamboozled:

Kubrick Question, Answered: Thanks to everyone who wrote in — especially John Singh, who was first — to answer a reader’s question about who wrote the epilogue in Stanley Kubrick’s Barry Lyndon. The film is based on the 1844 William Makepeace Thackeray novel The Luck of Barry Lyndon, and Singh notes that Kubrick took it almost directly from Thackeray —”though it isn’t the epilogue of the novel, and the movie changes the king (and the time period, slightly).” Sharp eye. It’s King George III in the movie, King George II in the novel. Here’s the epilogue again: “It was in the reign of George II that the above-named personages lived and quarrelled; good or bad, handsome or ugly, rich or poor, they are all equal now.”

Or as Paul Mooney Mooney Put It: “You will never see a Brinks truck following a hearse.”

Halston: Did a Woman Really Die Trying to Sneak into Studio 54 Through the Air Vent?
Did Halston Really Have a Falling Out With Jewelry Designer Elsa Peretti?