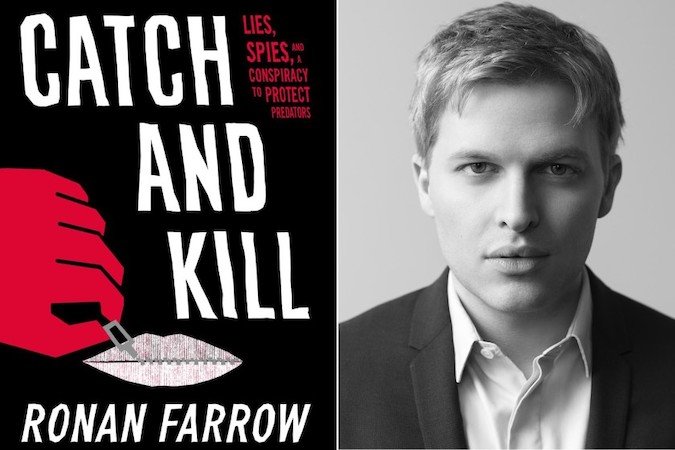 Ronan Farrow blasted the publisher of his #MeToo book Catch and Kill Tuesday for its decision to also publish the memoir of his estranged father, Woody Allen — and said he could no longer work with the publisher “in good conscience.”

Farrow has joined his mother, Mia, and sister, Dylan, in accusing Allen of sexually abusing Dylan in 1992, when she was seven. Allen has denied it ever happened.

Ronan Farrow said his publisher, Hachette Book Group, had concealed from him its decision to work with Allen on his memoir, Apropos of Nothing.

“Hachette did not fact check the Woody Allen book,” Farrow said in a statement Tuesday night. “My sister Dylan has never been contacted to respond to any denial or mischaracterization of the abuse she suffered at the hands of Woody Allen — a credible allegation, maintained for almost three decades, backed up by contemporaneous accounts and evidence.”

Added Farrow, who won a Pulitzer Prize for his coverage of Harvey Weinstein’s abuse: “It’s wildly unprofessional in multiple obvious directions for Hachette to behave this way.”

Farrow said he had asked Hachette to conduct a thorough fact-check, and to especially check “any claim that implies my sister is not telling the truth.”

He concluded: “I’ve also told Hachette that a publisher that would conduct itself in this way is one I can’t work with in good conscience.”

Ronan Farrow echoed comments from Dylan Farrow, who also said Tuesday that Hachette had not contacted her for any fact-checking.

“This provides yet another example of the profound privilege that power, money and notoriety affords. Hachette’s complicity in this should be called out for what it is and they should have to answer for it,” she stated.

Authorities investigated Dylan Farrow’s accusations in the early 1990s, but did not charge Allen. A judge did deny him custody, however, citing concerns about the accusations. Allen has maintained that Mia Farrow coached his daughter to lie because she was upset about his relationship with Soon-Yi Previn, Mia Farrow’s adopted daughter.

Grand Central Publishing, a division of Hachette Book Group, announced Monday that it will publish the memoir, Apropos of Nothing, on April 7.

Though Allen and Mia Farrow said that Ronan Farrow was their biological child while they were together, many, including Allen, have since speculated that Frank Sinatra could be Ronan Farrow’s biological father.