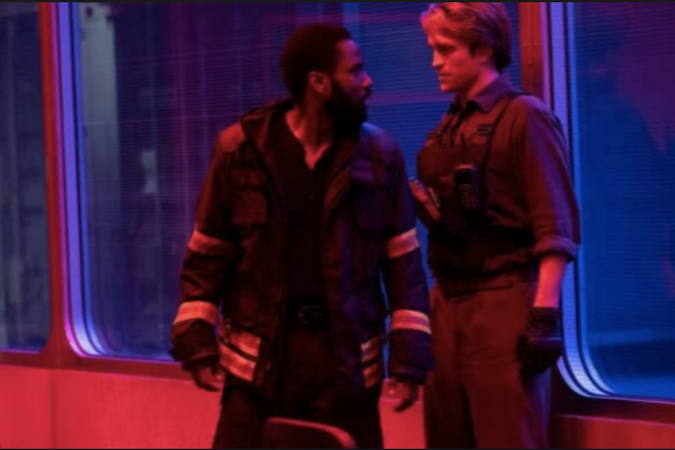 Tenet is so mysterious that Robert Pattinson, one of its stars, professes not to know what it’s about. But in a new GQ interview, held while he’s quarantined in a London apartment waiting for shooting on his new film, The Batman, to resume, he revealed that Tenet has multiple “enormous” set pieces — sequences as big as the climactic scenes in most films.

What might those set pieces be? He isn’t saying, of course. (If you’re wondering, a “set piece” is a big, calling card moment that proves to be one of the most dramatic or memorable moments in a film — like the collapsing dream sequence in Tenet director Christopher Nolan’s Inception, or the hijacking that opens The Dark Knight.)

Even the release date of Tenet is mysterious — Nolan is still hoping for a July 17 release, but almost every movie that was slated to come out prior to that date pushed back its release in response to COVID-19.

Pattinson says he hasn’t yet seen Tenet, and when GQ asked him if he could explain the plot of the movie, he replied: “Even if I had seen it, I genuinely don’t know if I’d be able to.”

Maybe he’s just being coy? He did, after all, read the script (albeit in a locked room), and it’s safer for him to say “I don’t know” than to accidentally let slip a secret abut the most-anticipated film of the year.

GQ asked Nolan if Pattinson truly doesn’t know, to which Nolan replied: “The interesting thing with Rob is, he’s slightly fucking with you. But he’s also being disarmingly honest. It’s sort of both things at once.”

What Pattinson did say, with no ambiguity, is that Tenet was a massive production with a crew of around 500 people, and that about half of the crew would travel together to different countries.

“And in each country there’s, like, an enormous set-piece scene, which is like the climax of a normal movie. In every single country,” Pattinson told GQ.

Oh wait, there’s more: Pattinson says otherwise unflappable crew members would come in on their days off just to watch Nolan’s special effects, because they were that impressive.

Tenet stars Pattinson and John David Washington as two guys who… do something. We truly have no idea what, but the trailer hints that it seems to involve coming back from the dead and reversing time.  Elizabeth Debicki, Dimple Kapadia, Michael Caine, and Kenneth Branagh also star.

It is Nolan’s first film since 2017’s Dunkirk, a Best Picture nominee, and unites two versions of Batman: Nolan directed the beloved Dark Knight trilogy, starring Christian Bale as Bruce Wayne/Batman, and Pattinson takes on the cape and cowl for The Batman, from director Matt Reeves, which has been pushed to a May 2021 release.

Reeves’ version of Batman stars Zoë Kravitz, Andy Serkis, Paul Dano, Jeffrey Wright and Colin Farrell. Serkis recently told LADBible, yes LADBible, that the new film is “very much about the emotional connection between Alfred and Bruce. That’s really at the center of it. And it is a really exquisite script that Matt has written.”

We’ll know in just about two months if the Tenet release date is tenable.

“I don’t know anyone in America who is pushing harder to get the theaters re-opened and to get his movie released than Chris Nolan,” IMAX CEO Richard Gelfond told analysts on a recent earnings call, and countless news outlets have latched onto that quote as a sign that the July 17 Tenet release date may actually happen, and that we may get to see those insane Tenet set pieces sometime soon.

Here, again, is a link to the full GQ profile of Pattinson, where he also volunteers that he isn’t working out especially hard for the role of Batman because “if you’re working out all the time, you’re part of the problem,” noting that actors in the ’70s, and James Dean, didn’t try to look like weightlifters.

Tenet, directed by Christoper Nolan, still has a July 17 release date, as of this writing.