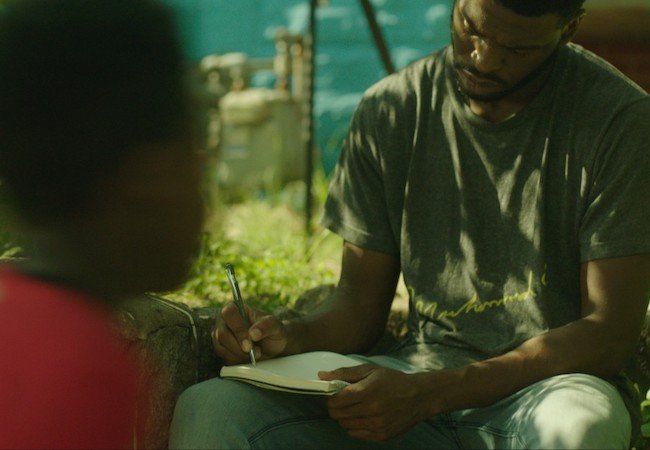 A young Black filmmaker named Jay tries to go home again in Residue, the new debut film from Merawi Gerima. But home may not want him back.

In the latest Low Key Podcast, we talk about how the film reflects the way racial dynamics play out in housing nationwide, and our own experiences with gentrification. You can  listen on Apple or Spotify or here:

The Netflix film follows Jay (Obinna Nwachukwu) from California back to his hometown of Washington D.C., where he finds his old neighborhood besieged by gentrifiers. As soon as he parks, a white guy tells him to turn his music down. A later incident involving an inconsiderate white duo walking their dog accounts for the film’s title.

Jay is determined to, in his words, “give a voice to the voiceless,” and goes around town looking for an old friend who seems to have left the neighborhood. But he soon realizes that many people around the block now view him as an outsider, not very different from the white gentrifiers who don’t truly care about them.

Like the upcoming Idris Elba film Concrete Cowboy, Residue is the rare Hollywood film to address gentrification and the unintended consequences of social mobility for Black residents. Outside of hip-hop tracks, American pop culture rarely discusses what happens to relationships when a person moves to another part of town — or another economic class.

In Residue, Jay’s lack of keeping in touch or visiting causes resentment and distrust. Residue notes that some people have the problem of how to deal with personal success, while others have to deal with a lack of opportunity to move up. These problems are often invisible to much of the citizenry.

Residue premiered at Slamdance earlier this year, and just had its West Coast premiere at the Mammoth Lakes Film Festival, where a panel that included MovieMaker managing editor Caleb Hammond gave it the Jury Award for Best Narrative Feature.

Hammond called it “a very strong debut,” adding: “Gerima has a long promising career ahead of him, that we’re all excited to follow. The film… is a subtle yet poignant look at the nature of moving on and how it affects both you and the people whom you left behind.”

In this episode, Keith Dennie, Tim Molloy and I discuss the strengths and weaknesses of Gerima’s stream-of -conscience narrative style, Jay’s mesmerizing character arc, and what we saw gentrification do to Memphis and New York, among other places.

If you like us, please subscribe and rate us on iTunes. And ask a friend to listen and do the same. Every review helps.

Residue, directed by Merawi Gerima, is currently available on Netflix.