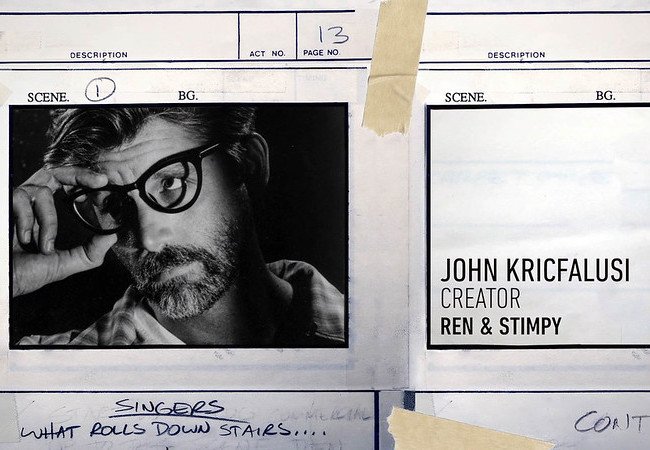 The directors of Happy Happy Joy Joy, a Sundance documentary about the ’90s cartoon Ren & Stimpy and its creator, John Kricfalusi, thought they were done with their film two years ago. Then BuzzFeed broke a story about Kricfalusi and two underage girls.

The directors, Ron Cicero and Kimo Easterwood, knew they needed to address the BuzzFeed report — and Kricfalusi’s admission that he had what he considered a boyfriend-girlfriend relationship with Robyn Byrd when she was 16 and he was in his early 40s. But Cicero and Eastwood were also committed to their original concept for Happy Happy Joy Joy.

That decision has led to some criticism of Happy Happy Joy Joy, which premiered at the Sundance Film Festival Tuesday and traces the rise and fall of Ren & Stimpy, a grotesquely beautiful cartoon about an abusive chihuahua and co-dependent cat.

Kricfalusi lost control of his creations in a series of clashes with Nickelodeon, which aired the cartoon in the early 1990s. Cicero and Easterwood spend about 90 minutes on that story before turning to Kricfalusi’s involvement with the two girls.

“Cicero and Easterwood have no idea how to handle the information in that Buzzfeed story, even with Byrd as a candid, but not too candid, talking head in the documentary,” reads the Hollywood Reporter‘s review of the film. “The directors gently push Kricfalusi for an unspecified apology, which he begrudgingly gives as part of a creepy plea for Byrd to contact him, positioning the entire situation as something unsavory and less-than-kosher, but far from borderline criminal. Make no mistake: Byrd’s Buzzfeed allegations are borderline criminal.”

The Buzzfeed story, which we recommend reading in its entirety, says Kricfalusi had inappropriate relationships with both Byrd and Katie Rice when they were teenagers who wanted to break into animation.

Byrd says she was 13 when Kricfalusi first wrote to her, and that he first touched her in a sexual way when she was 16. Rice told BuzzFeed that Kricfalusi made graphic sexual remarks to her during phone calls when she was underage, and sexually harassed when she became his intern.

Kricfalusi says in Happy Happy Joy Joy he would “definitely apologize” to Byrd and “admit to what I shouldn’t have done, that I did do.” He also expresses guilt and adds that he always had what he believed to be her “best interests at heart.” He tells the filmmakers he didn’t realize how hurt Byrd was, and adds that he wishes he could apologize to her in person, adding, “Give me a call, please.”

The directors told MovieMaker they decided to make the film after someone suggested Ren & Stimpy as a rich subject for a documentary — long before the BuzzFeed story.

“It actually started out as a documentary celebrating the show,” Cicero said. “Neither of us were fans. Kimo hadn’t even seen an episode before.”

When the story broke, Cicero says, they suddenly realized: “We have a toxic movie.” The dilemma was what to do about it. Abandon the project, or rework it to address the revelations? The film was self-financed, and they were “devastated,” Cicero said.

“This is our first film, this was supposed to be our calling card. And now it’s tainted,” he says he thought at the time.

But that led to questions about how to approach him, and how much to press him for a detailed response to the BuzzFeed story.

Cicero said he and Easterwood were careful “not to take a side.”

“First of all, we got John to talk on camera about these allegations,” Cicero said. “Several of them we addressed with him and asked him about, and as you saw in the film, he said, look, I don’t want to get into a lot of it, but he did ultimately talk about what happened with Robyn and for us it was really important not to take a side — not to say, oh, we’re condoning this — no.”

Cicero continued: “What we’re doing is, we’re presenting all the facts, which right now, by not taking an opinion and saying, ‘This guy is awful’ and spending two hours just pillorying him, is almost revolutionary, because these days, it’s like, either you’re a CNN person or you’re a Fox person, you’re giving your opinion, and we kind of felt that it’s led to this intellectual laziness. And obviously we’re not condoning pedophilia and we’re not condoning his behavior and we address it in the film. What’s kind of the bigger issue is how do you separate, or do you separate, the art from the artist?”

He added: “We wanted people to make up their own mind.”

Rice was invited to take part in the film, but declined, Cicero said.

In a statement for the BuzzFeed article, an attorney for Kricfalusi said: “1990s were a time of mental and emotional fragility for Mr. Kricfalusi, especially after losing Ren and Stimpy, his most prized creation. For a brief time, 25 years ago, he had a 16-year-old girlfriend. Over the years John struggled with what were eventually diagnosed mental illnesses in 2008.”

The attorney’s statement also said that “for nearly three decades [Kricfalusi] had relied primarily on alcohol to self-medicate,” but that he has since “worked feverishly on his mental health issues, and has been successful in stabilizing his life over the last decade.”

No one expects Happy Happy Joy Joy to be the last documentary to struggle with whether or not to become a #MeToo story. The situation sets off a debate about documentary ethics that will only become more pressing as we look at once-celebrated artists with increased scrutiny and awareness.

Happy Happy Joy Joy, Ron Cicero and Kimo Easterwood’s documentary about Ren & Stimpy and creator John Kricfalusi, premiered Tuesday at the Sundance Film Festival. It does not yet have distribution.

Once Upon a Time… in Chinatown: Exclusive Excerpt From Sam Wasson’s The Big Goodbye
Best Places to Live and Work as a Moviemaker, 2020