Releasing Your Demons: We Asked Some Pros to Discuss the Nature of the Horror Distribution Beast 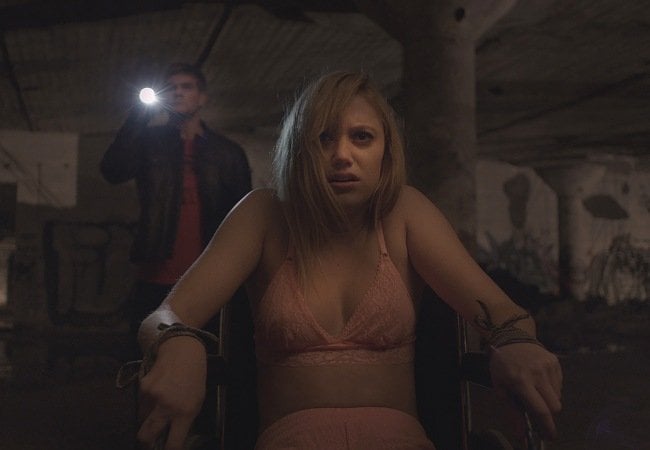 Should you release your horror film in theaters before it hits video-on-demand? Or on VOD before theaters? Or do it day-and-date, i.e. on both platforms simultaneously?

Ask independent distributors, and you’ll get all sorts of answers—but you’re guaranteed to hear at least one of the following catchphrases about the indie horror distribution landscape.

And they’ll all mention the fact that contemporary distribution is no longer a “one-size-fits-all” system. Ultimately, these terms are all speaking to the same understanding: that maximizing your audience requires seeing the theatrical and digital realms as a single, converged, multi-headed monster. When releasing your would-be breakout horror hit, a screen is a screen is a screen, be it in a theater, in your living room, or on your computer, tablet or phone. “As it pertains to film distribution, the gap between the indie world and the studio system is the greatest it’s ever been,” says Wood. “There’s no singular model anymore for how to release something.”

Recognizing those stakes, independents agree, begets a firm grasp on the identity of your company and its genre films, which in turn makes your choice of one of many release strategies a little less scary.

What Follows It Follows?

Though the majority of distribution leaders agree that VOD platforms and theatrical venues share equal footing in the quest for horror fans’ eyeballs, RADiUS’ handling of their 2015 critical and commercial juggernaut It Follows has shown that not all races to that bottom line are created equal. A brilliantly creepy sophomore feature by David Robert Mitchell, It Follows began to reach audiences with a tiered release in early spring that sent ripples throughout the indie pond.

Distributors in the digital age have, traditionally, released films with a 90-day window between theatrical exhibition and availability on DVD and VOD platforms. RADiUS devised three alternative strategies when it planned the release of It Follows, each of which they could implement on the fly after the first weekend: a small theatrical release followed by a VOD debut three weeks later; a limited, 600-screen theatrical release, with no VOD for three months; and a limited run that would move into a wide release, with no VOD before three months.

The film opened March 13 on four screens to an average of almost $41,000 per theater. For its distributor, this quickly justified an eventual March 27 wide release on 1,200-screens. “It Follows, on its first day of release, indicated that the best strategy was to continue going theatrically and delay the traditional VOD window [i.e. the third option they’d outlined beforehand]. We would make more and reach a wider audience,” says Quinn. Made for a mere $2 million, the film has taken in a domestic total of $14,674,076 as of June 25.

This approach, according to Quinn, improved upon RADiUS’ plan for their 2013 sci-fi thriller, Snowpiercer: a “delayed, clean theatrical launch over the course of two weeks, and delayed VOD.” While his company has always thought about platforms working in tandem, Quinn says their 2015 success spawned imitators. “People who’ve not been in the multiplatform space are like, ‘Oh, we’re gonna start doing this!’”

“What distributor didn’t love It Follows?” asks Mark Ward, chief acquisitions officer of RLJ Entertainment, an independent owner, developer, licensee, and distributor of entertainment content and programming. Yet Ward isn’t wrong to describe that film’s success as an industry “anomaly.” It Follows has joined an elite few indie horror titles—among them, Eduardo Sánchez’s The Blair Witch Project (1999), and Oren Peli’s Paranormal Activity (2007)—that, unlike most genre films, were able to realize the dream of “breaking out wide in a traditional [limited] release launched in New York and LA, then expanding into 1,000-plus prints,” as Quinn says. Just how many ingredients of It Follows’ formula can other releases replicate? And, whether you’ve got a studio deal or are self-distributing, how many should you try to replicate?

On July 8, Paramount Pictures announced that it had teamed with AMC Theatres and Cineplex Entertainment for a 17-day theatrical/VOD window for two of its forthcoming October low-budget horror releases, Paranormal Activity: The Ghost Dimension and Scout’s Guide to the Zombie Apocalypse.

“The Paramount plan is to, in their [films’] first two weeks, go as wide as they can theatrically,” Quinn says. In this way, Paramount, like RADiUS before it, capitalizes on the benefits of putting a limited (i.e. hopefully soon-to-be-wide) release in the theatrical space first, before VOD enters the equation.

Yet, Quinn notes, “Paramount has already announced their VOD date.” To him this shows a key misunderstanding of It Follows’ success. “It’s counterintuitive. If [I know that] Netflix is coming two weeks later, I might just wait to see it on Netflix. I don’t need to go see it theatrically.”

The takeaway? A formula is only as strong as the flexibility it allows. The flexibility of RADiUS’ three-tiered plan for It Follows gave the film a 113-day stint in its wide theatrical release. Their July 3 VOD date, once comfortably announced, still culminated in a veritable online boom—with It Follows entering the top 20 list on iTunes, where it has remained since it debuted. Though having alternative plans ready to be executed at a moment’s notice may, yes, be something of a logistical challenge for an indie player, holding off on committing to a rigid VOD timetable during the first two weeks of an exclusive theatrical run is ideal for gauging audiences’ appetites. Exercising that patience may lead to a wider release than anticipated, without sacrificing that coveted large online-content consumer base.

Theatrical is the Tip of the Iceberg

Ward brings up another point: that a film like It Follows, without a “name” cast, built uncommon pre-release word-of-mouth during its long, comprehensive festival tour. It was “very review-driven,” he says. “Festivals helped, clearly. How do you [quantify] that on paper?”

For Barry Gordon, CEO of the multiplatform independent distribution company XLrator Media, the answer to that question begins by redefining the theatrical space in itself. He asserts that the term “theatrical release” is a misnomer. “Every one of our films gets some level of theatrical promotion.”

What does that mean, precisely? Take the case of I-Lived. XLrator’s “theatrical promotion” of director Franck Khalfoun’s technophobic horror feature was given just four days in limited release—as well as special event screenings in New York and L.A.—before the film was made available on VOD platforms this July. But there was more to it than that. At the screenings, audience members were directed to download an app which XLrator had created and made free for the event screenings. (The film’s plot itself involves a fictional app called I-Lived). The real-life app was designed to pick up sound cues from the film, allowing the audience to interact with the film on two different screens—what Gordon calls a “second screen opportunity.” Thus, XLrator benefits by engaging the viewer even outside the theater, after the film has finished, on his or her smartphone.

This strategy—“one of the first interactive experiments for a genre picture,” says Gordon—was an attempt to induce viral results. Consider building your brand identity with content that favors viewer interaction and participation. Even if acclaim for your film is in short supply, an active, engaged audience can generate the word of mouth that critics traditionally facilitate.

The Happy Medium of Opening with VOD

“The beauty of horror,” says Ward, “is that it’s polarizing. One person’s ‘This is the worst movie I’ve ever seen!’ is another person’s ‘I was scared to death!’ I always tell filmmakers that the worst review you could have is ‘Meh, it’s OK.’ Don’t be stock.”

Middle-of-the-road fare, you’ll agree, is antithetical to success. But what about targeting a middle audience?

RADiUS’ Quinn says his company’s core mission is to find “more opportunities and solutions for the mid-release—not the wide or limited release.” “The true, hardcore genre films,” he explains, “fall into an ‘all-or-nothing’ category: the ‘all’ is the wide release; the ‘nothing’ is straight-to-DVD. Some people diminish multiplatform releases: ‘Oh, it’s a VOD title…’ But that’s a mis-categorization of what those films can do. There are horror films that appeal to audiences that don’t go see horror films, and find the middle ground. They could be breakout, crossover successes that defy the all-or-nothing distribution principle for genre.”

With a strong, well-placed VOD presence, then, steering indie horror toward cult status does not necessarily require the imagined prestige of a lengthy theatrical run. “VOD has been a big tool to help reach the middle audience,” adds Quinn. “I would have to play every single screen, be the only film in release, and be playing 24/7 for the entire week to even come close to representing a small percentage of what I can reach on VOD.”

The “middle” idea applies to geography, as well as genre—i.e. audiences located between the spoilt-for-choice coasts. Hence the drive, on some parts, toward an increasingly common day-and-date model.

Five years into their lifespan as a genre production house, SpectreVision (co-founded by Wood with partners Daniel Noah and Josh Waller) have yet to self-distribute their titles. Their forthcoming horror-comedy, Cooties, was purchased by Lionsgate’s newly formed specialty distributor, Lionsgate Premiere, at the Sundance Film Festival in 2014. The film, which stars Wood alongside Alison Pill, Rainn Wilson, and horror screenwriter-turned-actor Leigh Whannell (Saw, Insidious), is slated for a simultaneous limited theatrical and VOD release September 18.

“Either shortly after the theatrical or in a day-and-date release, VOD exposes people to movies that they may not otherwise see, depending on the territory they live in,” says Wood. “Prior to that, if you lived in a small town in the Midwest, there likely was no art house cinema.” Filmmakers working closely with their distributors should be sure to devise a strategy that enables your film to reach the living rooms and computer screens of the art house deprived demographic.

Yet another advantage of beefing up the VOD side of the equation? It’s cheaper. After all, RADiUS’ plan for It Follows included TV advertising, far more expensive a proposition than word-of-mouth.

The broad appeal of RLJ’s latest genre title, fan favorite Joe Dante’s zombie rom-com, Burying the Ex, coupled with the star power of its leads (Anton Yelchin, Ashley Greene, and Alexandra Daddario), “warranted a special release,” says Ward. “But the costs to traditional releases are very high—$10-15 million—and if an indie has a couple misses, it’s probably over. We feel a title like that can carry itself in theaters, but also go onto premium VOD at the same time.” With its June 19 release of Burying the Ex exclusively on premium VOD, RLJ used VOD gauged an audience’s appetite for theatrical exhibition, in the same way that a limited release can gauge the demand for your film to go wide.

Star Anton Yelchin and director Joe Dante on the set of Burying the Ex, released June 2015 by RLJ Entertainment. Photograph by Suzanne Tenner

Be advised, though, that major multiplex chains such as Regal Cinemas, who staunchly oppose simultaneous theatrical and VOD releases, also pose a threat to those eager to spend in service of the upside of such a strategy.

Looking Alive: Five Ways to Survive Your Horror Film’s Festival Run
The Case for Donations: Why I am Distributing My Next Film, Tex Montana Will Survive!, Via Creative Commons