Raising Buchanan: What Happens When the Unanimous Worst President in History Has Competition? 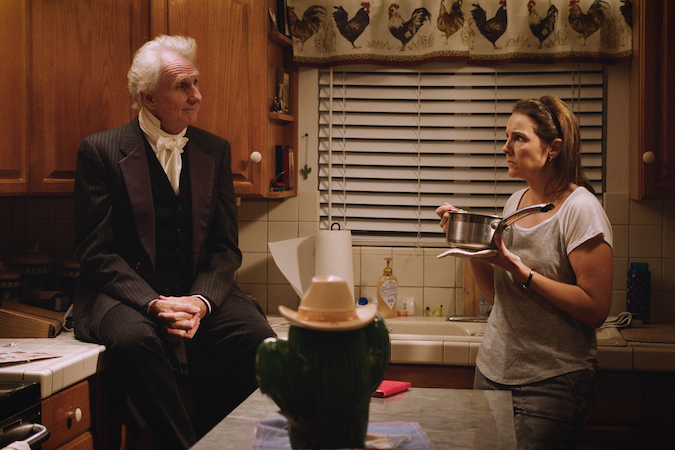 While driving in northern Arizona on a location scout for our film, Raising Buchanan, we hit a wall — a metaphoric wall. The kind that raises your blood pressure, not your auto insurance premiums.

The problem was that a central conceit of our film was suddenly called into question, courtesy of the 2016 election. And it had the potential to unravel the story we had painstakingly structured.

In early 2016, our producer and lead actress Amanda Melby was furiously trying to raise the capital for our modestly budgeted indie feature while I was putting the finishing touches on the screenplay. In a nutshell, Raising Buchanan tells the story of Ruth (Melby), a donut shop employee with anger issues who finds herself in the position to “kidnap” the corpse of President James Buchanan. She hopes to ransom him for a big payday, but quickly discovers that no one is particularly interested in getting him back.

At this point in 2016, there was a consensus pick for the title of worst President of the United States: James Buchanan. He was the president just before Lincoln — which meant the country started falling apart under his watch. By the time Lincoln took office, seven states had already seceded from the Union. Beyond that, he had a hand in such grim escapades as the Dred Scott Decision, Bleeding Kansas, the Lecompton Constitution, and the Panic of 1857. Look them up; they’re charming.

Historians, presidential scholars, and political scientists regularly rank the presidents on a range of criteria, and Buchanan could always be counted on to bring up the rear. He often finds himself duking it out with Andrew Johnson (the guy immediately after Lincoln) for the lowest rung. But even diehard members of the “Andrew Johnson-sucks” contingent would likely shrug and say, “Well, you may have a point about Buchanan.”

Our screenplay was peppered with references to Buchanan’s bottom-of-the-barrel reputation. Several characters echo one another in their appraisal of him being “the shittiest one.” And indeed, James Buchanan himself (as played by late, great character actor René Auberjonois) appears throughout the film to defend — or at least explain — himself to Ruth, who sees an alarming reflection of her own life in Buchanan’s story. His legacy is a constant source of comedy and pathos. The whole “James Buchanan-is-the-worst-POTUS” element was completely baked into the screenplay.

But again: The election of 2016 threw a wrench in the works.

Now, there’s no need to turn this into a political screed. But it is my personal belief that history will objectively judge Mr. Trump to be our worst president ever, and it won’t be close. He’ll win the title in a walk. This has precious little to do with notions of Republican/Democrat or conservative/liberal. He’s simply a terrible human being. No need to enumerate his transgressions; you either already know, or you choose not to.

So more than 150 years after leaving office, Buchanan has finally given up the mantle. Enjoy your retirement, Old Public Functionary!

Flash forward to August of 2017. Amanda and I were headed north on I-17 toward Prescott. The current administration had been in place for only seven months and already the writing was on the wall. The film was still a year or two away from screening. How much worse could the administration be by then? What happens when your film’s “worst president ever” is no longer conceivably the worst president ever?

Basically, we had three choices: ignore it completely, bring Trump into the story, or do something else we hadn’t thought of yet.

While ignoring the issue would be the simplest solution, we quickly dismissed it. After all, any post-2016 film that purported to tell the story of our “worst president” and didn’t acknowledge the elephant in the room would be rightly ridiculed. This was a bit too cowardly and embarrassing. If we’d made the film a couple of years earlier, we’d probably get a pass. But no, ignoring it wouldn’t do.

So why not just lay our cards on the table and embrace the man? Trump’s fair game, why not talk about him? Could be pretty fun. We could tailor some dialogue to connect the dots between Buchanan and Trump — or even make Buchanan a thinly veiled stand-in for Trump. It would be an easy trap to fall into. But the more we expand out the Trumpian aspects, the less the story is about Ruth and Buchanan. Besides, “Making it all about Trump” is the embarrassing default posture of our commander in chief.

And that lands us squarely in “something else” territory.

Starting with the most draconian approach: Why does it have to be Buchanan? Does it have to be a real president at all? True, most people don’t know anything about Buchanan. But he checks a lot of boxes to use as a character in this story. There’s the elegance of him being rated our worst president. Also, it’s helpful that he had no children — which means that there won’t be any bruised and defensive descendants to consider.

But there is another critically important factor: his resumé. The man had the most impressive CV of any incoming president. He had been a state congressman, a U.S. congressman, a U.S. senator, minister to the U.K. and Russia, U.S. Secretary of State, and had received two offers of appointment to the Supreme Court. If there was ever a “president-in-training” regimen that could be presented in a Rocky-style montage, this was it. His eventual failure as president flew in the face of all that experience.

Amanda’s character, Ruth, has the same sort of background, albeit lower-case: loaded with achievements and expectations, until a calamitous event derails her perceived destiny.

So based on all of the character parallels, it had to be Buchanan.

We also came to the conclusion that we shouldn’t mention Trump by name, as that would date-stamp the film in a way that might not age well. If you’re writing All the President’s Men, you absolutely need to provide details and touchstones of that specific time, but otherwise it can be a tricky bargain. There’s a scene in the Chevy Chase film, Fletch, where he ad-libs a reference to “Vicki Morgan tapes.” By the time the film made it to the screen in 1985, the line was already dated. It’s the sort of thing that can pull you out of a film in a subtle way, as if you suddenly see the seams in the production. A film can’t help but represent the time in which it was made, but we wanted to avoid the seams.

Errol (Steve Briscoe) and his Ventriloquial figure star in his popular online videos in Raising Buchanan, directed by Bruce Dellis.

Amanda and I considered adding several small speeches to acknowledge Trump’s potential challenge to the throne. Then we thought we should just do a couple of small speeches. Then…maybe just a single speech?

We eventually settled on two changes. The first was a subtle adjustment that required several actors to simply say one additional word. We kept the line that was repeated by multiple characters (“He was the shittiest one…”), but then we had each actor pause for a beat afterward, and then say, “Well…”

Between Amanda and I, we’ve watched dozens of screenings of Raising Buchanan at a variety of film festivals all over the country, and the meaning of that small adjustment is lost on no one. It’s a fun recurring gag where the laughs grow each time it happens.

Throughout the shoot, I had a hand-scrawled note in the margin of my screenplay that said, “Civil War/Trump.” I had a vague idea of what I wanted Ruth to say to Buchanan. But I had been reluctant to write the speech, until I absolutely had to.

I scrawled out a rough draft of the speech during a lighting setup in the morning, then chopped out about half of it and knitted the chunks together. I then cavalierly handed the speech to Amanda so she could learn it over lunch. Yes, writer-directors often do very mean things.

The final speech spoke to the notion of how presidents are re-evaluated and re-ranked all the time, and when one comes along who’s worse than Buchanan (“…which will probably happen sooner rather than later…”), it won’t be great news. It also touches on the idea that the best any president could have done to prevent the Civil War was to simply kick the can down the road for another generation to deal with, so maybe Buchanan was “the best worst president at the exact right time.” Amanda and René nailed the scene beautifully in spite of learning the speech at the last possible moment.

Invariably, people will come up to me after a festival screening of Raising Buchanan and comment about the Trump references. On a few occasions, someone will mention that the reference is timeless, since someone seeing it 20 years from now will believe it applies to whomever occupies the Oval Office at that time. It’s very sweet. God, I hope they’re wrong.

Raising Buchanan is now available on home video and to stream on VOD.

Robert Pattinson Promises ‘Enormous’ Tenet Set Pieces ‘Like the Climax of a Normal Movie’
What Really Happened to Anna May Wong?