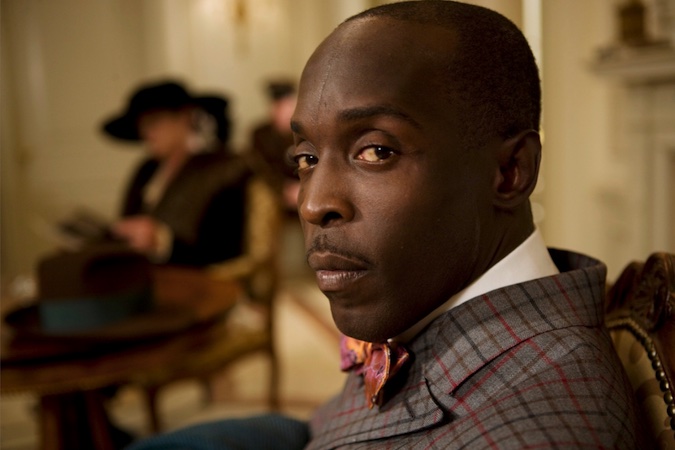 Congratulations Shang-Chi: The first Marvel superhero film with an Asian lead actor — Simu Liu — blew away the previous record for Labor Day weekend, earning $90 million over four-days. That’s roughly twice what it was projected to pull in. (Expectations were cautious in part becuase of COVID-19 fears.) The three-day opening of $75.5 million for Shang Chi was the second-biggest since the start of the pandemic, behind only Black Widow, which opened to $80 million in July, Variety noted.

R.I.P Michael K. Williams:  The magnificent actor, best known for playing Omar Little on The Wire, was found dead yesterday in his New York apartment. He was 54. Williams was nominated for an Emmy three times for acting, for roles in When They See Us, Bessie, and The Night Of, and is currently up for outstanding supporting actor in a drama series for Lovecraft Country. Before his breakthrough in The Wire, he was also a guest on shows including The Sopranos. I especially liked him on Boardwalk Empire, where he played Chalky White, leader of a Black crime syndicate trying to flourish during Prohibition, and had the honor of interviewing him about the show in 2013. He was friendly, funny, relaxed, charming, and very obviously adored by his cast mates. He wryly explained what it means when a show is “making multiples.”

Obama’s Favorite Character: The Associated Press said that his death was being investigated as a possible drug overdose. Williams talked honestly about his struggles with drugs over the years, but had a moment of clarity in 2008 while attending a campaign rally for Barack Obama in 2008 with his mother. From the stage, Obama said The Wire was the best show on television — and that Omar was his favorite character. “Hearing my name come out of his mouth woke me up,” Williams later told The New York Times. “I realized that my work could actually make a difference.”

R.I.P. Jean-Paul Belmondo: The star of Breathless and Pierrot le Fou, among other films, has died at 88. The Guardian‘s Peter Bradshaw wrote a gorgeous appreciation, which includes this description of Belmondo’s final scene in Breathless: “Defying agony from his bullet wounds, he just clownishly stretches his face into the two silly expressions he’d earlier used to explain the phrase “faire la tête”: a goofy silent scream, then a panto grin. Isn’t this what acting is, what life is: tragedy, comedy, faces, speeches? Who cares?”

Phil Tippet’s Mad God: Phil Tippet, a visual effects mastermind whose creations include Jabba the Hutt and the AT-ATs from the original Star Wars trilogy — and who won an Oscar for bringing dinosaurs to cinematic life in Jurassic Park — has always wanted to write and direct his own feature film. And now, at 69, he has. Mad God features stunning stop-motion creations he first began developing in 1987. Thanks to a very successful Kickstarter campaign and lots of help from Tippet’s loyal animators, Mad God is now playing festivals — including, last month, the Locarno Film Festival and Fantasia Festival. It makes its U.S. debut at Fantastic Fest later this month. Here is the trailer: