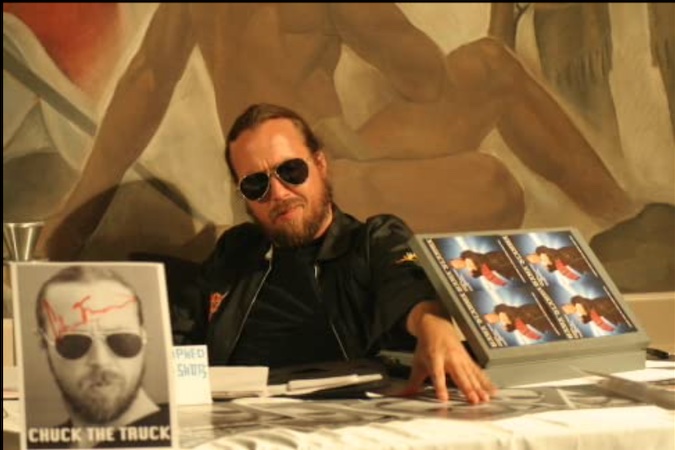 Clint Eastwood on Aging: “I don’t look like I did at 20, so what?” the 91-year-old tells The Los Angeles Times in a profile pegged to his new film, Cry Macho. “That just means there are more interesting guys you can play.”

Recommendation: Saw Paul Schrader’s The Card Counter in a theater this weekend, and the writer of Taxi Driver and writer-director of American Gigolo is as good as ever. Try to go in knowing nothing. Oscar Isaac, Tiffany Haddish, Tye Sheridan and Willem Dafoe star. That’s all I’m saying. Okay, also, there are cards in it.

More Recommendations, from TIFF: So far I’ve seen Dashcam, Attica, and The Jockey though virtual Toronto International Film Festival Screenings. Dashcam, a horror film that unfolds through pandemic England via a dashboard camera, made me think about how some filmmakers treat COVID protocols like a new kind of Dogme 95. Dashcam isn’t one of them.

The Marvel Christmas Spectacular: The new Disney+ show Hawkeye, starring Jeremy Renner as the least powerful Avenger and Hailee Steinfeld as young archer Kate Bishop, will be a Christmas story. (The tagline on the poster is, “This holiday season, the best gifts come with a bow.”) The show also features a Broadway musical about former Captain America Steve Rogers. Here’s the Hawkeye trailer.

Do You Like Comics? If so, the collections Hawkeye Vol. 1: My Life As A Weapon and Hawkeye Vol. 2: Little Hits, by Matt Fraction and David Aja, are some of the best I’ve read, in terms of art, story, and flair. They collect issues 1-11 of the Hawkeye comic book series that looks to be a big influence on the Disney+ show. The issues were known for groundbreaking, understated storytelling — especially the issue told entirely from the POV of a dog.

R.I.P. Ben Best: The Eastbound & Down co-creator died yesterday at 46. “It’s with heavy hearts we say goodbye to our good buddy Ben Best,” Rough House Pictures posted on  Instagram. “We lost him the day before he would have turned 47. A hell of a friend and a creative force. He inspired us and made us laugh. Charming and hilarious. Gone way too soon. We love and miss you.” Rough House is run by Best’s friends and frequent collaborators Danny McBride, David Gordon Green and Jody Hill. Best co-wrote and co-starred in The Foot Fist Way with McBride and Hill, who directed. They later teamed up on Eastbound & Down, in which Best played hard-partying bartender Clegg. He also co-wrote Your Highness with McBride and acted in films including Land of the Lost, Superbad and Observe and Report. “RIP Ben Best. I remember seeing him as Chuck The Truck in Foot Fist Way and thinking ‘I have to work with this man,'” wrote former co-star Seth Rogen. “I’m honored I got work with him, and even more so and that I got to hang out with him and just be in his company. Watch Foot Fist Way today and bask in his genius.” No cause of death was given.

How Werner Herzog Inspired Us to Make Too Soon: Comedy After 9/11
The Director of We Need to Do Something Needs to Say Something About Compromise