In Dashcam, a Trump Troll Is Tormented by Anarchy in the U.K. 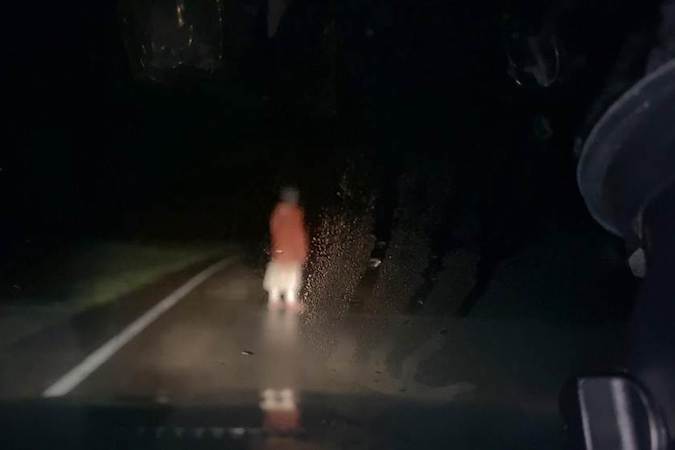 In Dashcam, a new horror film that just premiered at the Toronto International Film Festival, a MAGA-hatted social media provocateur named Annie Hardy breaks quarantine in Los Angeles to travel to the UK, where she mistakenly believes life will be more relaxed.

Soon after she arrives, she encounters something much worse than COVID-19. It all plays out on the dashboard camera she uses to communicate with fans who tune in to watch her perform freestyle songs as she drives.

Dashcam is the latest of many low-budget films produced during COVID-19 lockdowns, and feels like a step forward. It plays more like a frantic Blair Witch than a socially distanced slow burn. Its British director, Rob Savage, and his co-writers, Gemma Hurley and Jed Shepherd, previously collaborated on another pandemic horror film, last year’s streaming success Host.

Some COVID movies wear their logistical limitations as a badge of honor, as if COVID protocols were a variation on Dogme 95. Others simply pretend COVID didn’t exist, and artfully shoot around the limitations without drawing attention to the added effort involved.

Dashcam wisely uses the lockdowns as a backdrop and then pivots in a completely different and giddily gross direction. It has gruesomely great set pieces, especially in a lake, a funhouse, and an un-fun house. The hand-or-dash-held camera moves constantly, making us really work to understand what’s going on — except in scenes where it falls eerily, effectively still.

The film mercifully avoids any sanctimony about pandemic protocols, and instead steps back to  just note the weirdness of this moment, especially in a scene where a restaurateur who is wearing his mask wrong (his nose is exposed, so what’s the point, really) becomes more and more furious at Annie for being unmasked.

Annie Hardy is played by the real Annie Hardy, an L.A. musician who really did start livestreaming a dash cam show a few years ago in which she freestyles songs based on short suggestions from her viewers. The Annie Hardy in the film seems to be an outsized, more outrageous version of Annie Hardy in real life. It’s never clear if she’s an actual Trump supporter or just someone who likes the outrage she gets from wearing her Make America Great Again hat in public. But the character in the film shares the former president’s dismissiveness toward masks, and some of his followers’ belief that COVID is a hoax.

Annie-in-the-film is MAGAnificently unlikeable — rude, gross, hypocritical, selfish. One recent review of the film called her “the worst person on Earth.” (The real Annie is much more sympathetic — she has suffered unfathomable loss in recent years, including the loss of her infant son and her boyfriend, Robert Paulson, a rapper known as Cadalack Ron.)

You could read the film as a British criticism of a certain kind of American. But no matter how we feel about Annie, Dashcam wittily exploits the fact that we as audiences end up rooting for whomever occupies the frame the most, even if they have a tendency to do things like spitting in their hands and then slapping sleeping friends awake.

The poor awakened friend is played by Amar Chadha-Patel, whose character’s nickname, Stretch, may or may not be inspired by grotesque behavior he was known for when he and Annie were bandmates back in L.A. When Annie arrives in the UK, she clashes immediately with Stretch’s masked, sanitized girlfriend, played by Jemma Moore, and messes up Stretch’s job as a food delivery driver with her rejection of basic politeness or respect.

But then she stumbles into a job delivering a masked, obviously sick woman named Angela (Angela Enahoro) to a distant locale, and bodily fluids begin appearing in very unwelcome ways, and soon she Annie and Stretch are hunted by… something.

Internet commenters leave a speedy Greek chorus of comments as they watch, sometimes saying what we as viewers are thinking, and sometimes going to very dark places. The device was used to even better effect in last year’s terrific Spree, directed Eugene Kotlyarenko, which also involved social media, a car and lots of carnage. The running commentary is one of many places where Dashcam drops homages and inside jokes, including one commenter saying “you’ve got red on you,” a reference to Edgar Wright’s 2004 zombie comedy Shaun of the Dead.

Provocations abound. Annie rolls her eyes at Black Lives Matter signs, and Angela is Black, as many of the commenters point out. It’s unclear whether there’s some symbolism here, but let’s just say that Annie doesn’t learn any valuable lessons.

Dashcam is now playing at the Toronto International Film Festival.