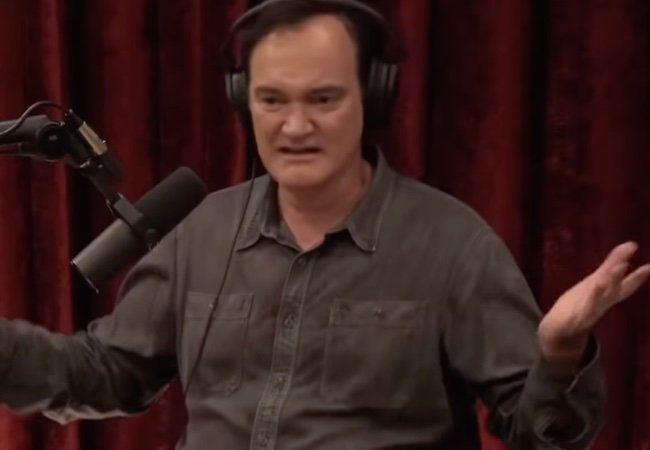 Quentin Tarantino says he respects Shannon Lee’s right to criticize his portrayal of her dad, Bruce Lee, in Once Upon a Time… in Hollywood, but that other critics of the fictionalized portrayal can “suck a dick.”

He was responding to the criticism of the portrayal, yet again, on the Joe Rogan Experience podcast. He joined the show to promote his brand-new novelization of the film. Tarantino cautioned that he was hesitant to address the matter because “I don’t want this to be the only thing people pull from this show.”

“Where I am coming from is, I can understand his daughter having a problem with it. It’s her fucking father, alright? I get that,” Tarantino said. “But anybody else? Go suck a dick.”

Rogan laughed for a long time.

Also Read: Was That Bruce Lee vs. Cliff Booth Fight a Dream? Quentin Tarantino Novelization Has the Answer

The scene in the movie — which Tarantino expands on in the novel — begins with Bruce Lee, standing on a backlot, praising the fighting skills of Muhammad Ali. When someone asks who would win if he and Ali fought, he says it would never happen. But when pressed, he confidently declares, “I’d make him a cripple.”

Cliff Booth, the stuntman played by Brad Pitt, finds this funny. Lee takes offense, and they agree to a best two-out-of-three-falls fight. Lee knocks Booth down first, easily, and Booth then surprises Lee by hurling him into a car. The fight is broken up before the third fall, so it’s essentially a draw.

Shannon Lee first criticized the scene nearly two years ago when I interviewed her for TheWrap.

“I understand they want to make the Brad Pitt character this super bad-ass who could beat up Bruce Lee. But they didn’t need to treat him in the way that white Hollywood did when he was alive,” Shannon Lee said. “He comes across as an arrogant asshole who was full of hot air. … And not someone who had to fight triple as hard as any of those people did to accomplish what was naturally given to so many others.” 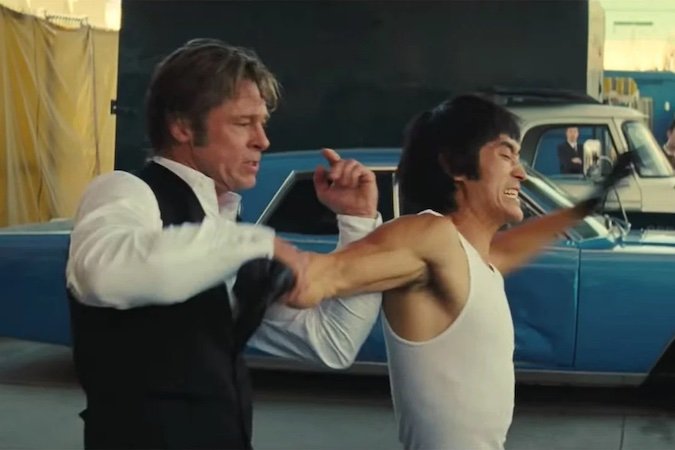 Cliff Booth (Brad Pitt) fights Bruce Lee (Mike Moh) in Once Upon a Time… in Hollywood, by Quentin Tarantino.

Tarantino explains in the novelization — and explained to Rogan — that in the fictional fight, Cliff Booth tricks Bruce Lee, by letting Lee knock him down first, giving Lee a sense of overconfidence. This lulls Lee into repeating the move, which gives Booth the opportunity to throw him into the car.

The book also makes clear that Lee is taking care not too hurt Booth too badly — but that Booth isn’t returning the courtesy.

Tarantino says the fight was inspired in part by actual beef between Lee and the stuntmen on The Green Hornet, the 1960s TV show in which he played Kato. The Once Upon a Time… in Hollywood fight takes place on the Green Hornet backlot.

“The stuntmen hated Bruce on Green Hornet,’” Tarantino told Rogan. “It’s in Matthew Polly’s book [Bruce Lee: A Life] and before that, it’s always been known. That’s why [stuntman] Gene Labelle was brought on, to teach Bruce respect for American stuntmen.”

“Bruce had nothing but disrespect for stuntmen, and he was always hitting them. He was always hitting them with his feet,” Tarantino continued. “It’s called tagging when you hit a stuntman for real. He was always tagging ’em with his feet and he was always tagging them with his fists and… it got to be the point where [they’d say] ‘I refuse to work with him.’ And he had nothing but disrespect for American stuntmen. … It’s like,  ‘Ah, they’re just not good enough. They’re pussies. I want to make it look real.’ … But they don’t like that. That’s unprofessional.”

Tarantino also adds lots of backstory in the novel, including that Cliff Booth killed many, many men in World War II, in hand-t0-hand combat and with a knife. He told Rogan that Booth would kill Bruce Lee in a jungle fight, but would never be able to beat him in a martial arts tournament.

The book also makes Lee more sympathetic than the movie does, making clear that Booth is the bigger aggressor in their contest. Even before he meets Lee, he describes him in homophobic and jealous terms.

Finally, Tarantino’s love of Bruce Lee should be obvious: Uma Thurman’s yellow suit in Tarantino’s Kill Bill Vol. 1 is similar to one that Lee wore in Game of Death. Roman Polanski, one of Lee’s Hollywood martial arts students,bought it for Lee on a ski trip to Gstaad, Switzerland. (That trip gets a brief mention in Tarantino’s Once Upon a Time in Hollywood novelization.)

Here’s What the Ghost of a Lady in White Has to Do With Sophie Toscan du Plantier’s Murder
Don’t Make a Movie With a Mobster: Advice From Indie Film Hustle’s Alex Ferrari