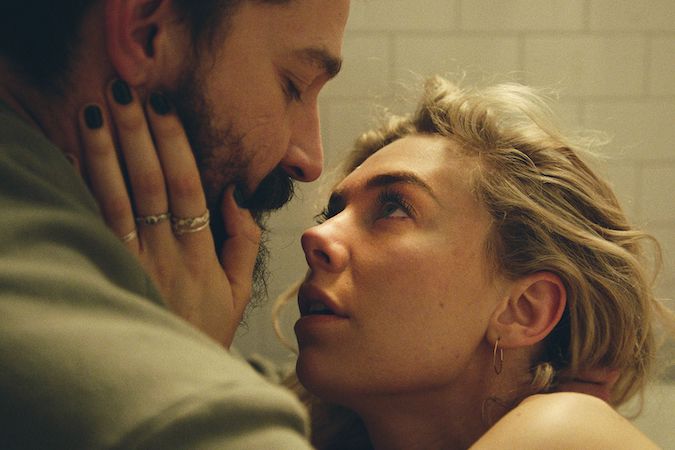 Pieces of a Woman stars Vanessa Kirby, Shia LaBeouf, and Ellen Burstyn as a family torn apart by grief. This grief is set in motion early in the film, in the form of a harrowing 24-minute single-take birth sequence. In this feature, cinematographer Benjamin Loeb goes over how he and director Kornél Mundruczó staged this impressive sequence. Spoilers follow.

The premise of Pieces of a Woman is rather daunting. I feel like there must be unwritten “rules” about making movies in which children or babies die. And yet, Kornél Mundruczó and Kata Wéber pulled from their past to address a subject most wouldn’t: not just death, but grief, and the expectations of somebody carrying the weight of loss.

Kornél and Kata already translated this story in 2018 to the stage in Poland, in an acclaimed theatrical piece of the same title. The stage play consists of two complex scenes: a birth and a confrontational dinner. The scenes are the pillars of the film adaptation, starring Vanessa Kirby and Shia LaBeouf as our main characters, Martha and Sean. The film’s opening tragedy unravels over a single 24-minute take.

We knew going into pre-production that the film as a whole hinged on this scene, and it was decided very early on to shoot the birth in the first three days of production. This sequence didn’t only determine Martha’s narrative, but the narrative of the film’s visual language. Kornél told me that he absolutely did not want to shoot this film in an overly composed and static manner. This would be the antithesis of our visual language. Through numerous conversations, touching on our own personal experiences at the births of our own children, we decided that the right approach was to aim for a single take that compressed and expanded time without cuts. We spoke at length about the fluidity of time during birth, and how it could feel on the one hand that time wasn’t moving at all, and on the other that events flashed by in the blink of an eye — in the vein of a memory, visuals expand and contract in an abstract space. We wanted the audience to feel this way, and let the blocking, choreography and acting take you through this scene in a way that made time and space feel irrelevant. The 24 minutes of screen time could feel like hours, days, and just a single minute, all at once.

The location also became central to piecing the scene together, and knowing that Kornél wanted a 360-degree approach, with the camera in every location, complicated the take. We wanted the actors to have freedom to move, without the interference of marks and such — obviously within the blocking that we had created in unison with them. But we did not want to be tied to technicalities. Especially in a scene like this one, that required so much from the actors.

We began with an initial camera test, without the actors, looking at a handheld camera versus the movement of a gimbal. Kornél and I were adamant that a Steadicam wouldn’t work, given how we envisioned the scene. We both wanted me to operate the camera. The handheld felt like something we had both seen too many times before. It was almost too real, or human. And the gimbal, which essentially is a camera stabilizer, would allow me to operate the camera myself and be flexible, but at the same time eliminate the hand- held aspect of the movement, to a certain degree. We brought out a Ronin 2 gimbal to see what it would feel like. I had never operated a gimbal before, and jumping into a single-take sequence over that length of time seemed like a recipe for failure at first. But our gut told us to do it.

I had tested numerous lenses for this film, but the Panavision Primos were always high on my list. I had originally been looking at the painterly qualities or softness of the ultra speeds, but did not want to risk the flaring or ghosting these lenses might add, so we ended up detuning a number of Primo primes, including the PCZ (Panavision Compact Zoom) — which became our workhorse lens on the gimbal. This made my 1st AC Maxime Boutin’s job increasingly difficult as he tried to judge what type of movement I was creating with the camera. He had to watch everything live from his monitor and could not be in the room with me. My capacity to move in any direction with the gimbal, and the zoom control under my thumb, made it hard for him to tell if I was physically moving, or zooming. Sometimes I did both.

Kornél and I had taken the blocking from the stage play and re-imagined it in our apartment location, which included myself and three actors entering and exiting a 20-inch doorway that opened onto the bathtub. After receiving some custom pieces for our Ronin 2 from gimbal operator Chris Herr, I started rehearsing to get a sense of what the weight would do to my back. After three or four hours, I felt like I should save my energy for the actual take. Most of the crew had made bets that I would not be able to carry the camera all day.

We wanted the film to be rooted in realism. We discussed at length our fear of making it too “pretty,” for lack of a better word. We wanted to ground it in a feeling that reflected Robert Bresson — but stayed true to classic auteur melodrama, in the vein of Rainer Werner Fassbinder and Max Ophüls — with a human edge. 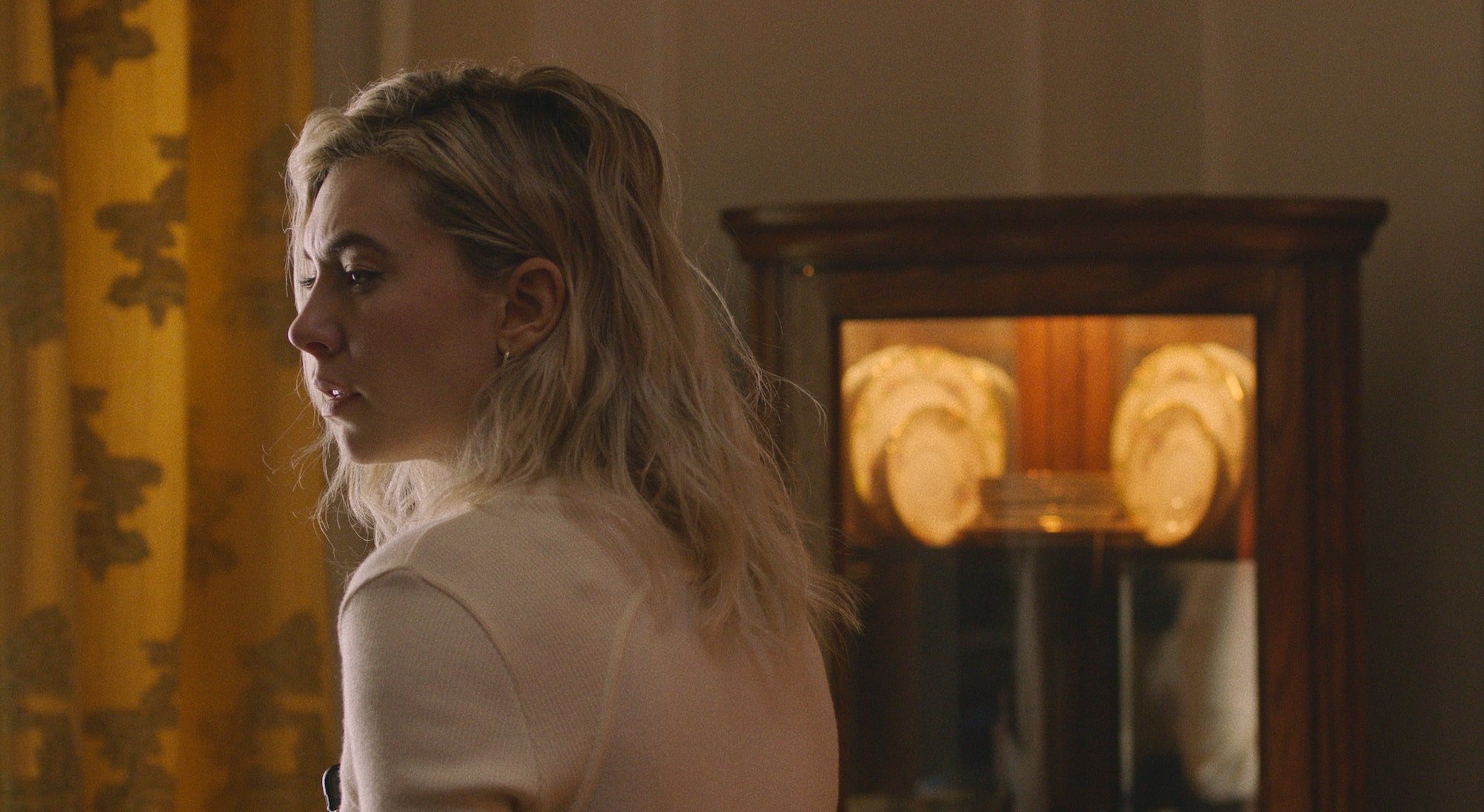 Vanessa Kirby in Pieces of a Woman, directed by Kornél Mundruczó. Photo by Benjamin Loeb

We wanted the audience to feel as if they were watching a cinéma vérité through the eyes of a spirit or a soul, perhaps — ”the one lost.” Kornél and I spoke about this notion from the beginning. We wanted a spiritual feeling, where the scene could almost be from the perspective of another entity, like the lost baby, for example. We never wanted to say that it was from the perspective of the baby, but it became the backbone to our philosophy behind how and why the camera would move in the manner it did, and its “curious” nature. The camera is slightly below normal head height, follows the actors, and moves without footsteps or too much of a human presence. We absolutely did not want it to feel mechanical. Our biggest inspiration came from the paintings of Lucian Freud and Balthus Klossowski. Though they are different, they share many similarities. Their conservative pastels have a provocative context: Something radiates from within. Their paintings became the starting point for most of our conversations, which our production designer Sylvain Lemaitre translated into the design and layout of the apartment. With my key grip, Jean-François Burt, we tinted the apartment so we could control the lighting. My gaffer, Bruno Ferland, wired all of our practical lights to a dimmer board, from which he could control the units. There was barely a corner where anything could be hidden, as every nook and corner of the apartment was in view through our lens. I was, however, able to hide two LiteMats in the ceiling of the hallway, in addition to some smaller elements, to highlight specific areas that lacked texture.

Also read: How the Goodfellas Tracking Shot at the Copacabana Got Comically Thwarted

Outside, we placed a couple of SkyPanel S60 units on the front and back side of the apartment, to create a bit of life and texture through the windows. We had made the creative call to leave the outside almost black, to reflect more of the interior, as it felt more natural. The rest of the job was figuring out the recipe of ingredients that would create the right “tone.” During our one day of rehearsals, Bruno would be on coms with me, dimming or raising the practical elements as we moved through the space to find the correct levels for each position. Main boom operator Norman Bernard and sound mixer Simon Poudrette were my dance partners throughout the scene, trying to step in close enough to get the audio they needed, while staying out the way of the actors, so they could perform.

We did a total of six takes over two shooting days — four on day one, and two on our second day. When editor Dávid Jancsó confirmed we had it in the can, and moved on. What actually ended up on film was the final take on our first day: 24 minutes of raw energy, talent, beauty, and imperfections.

Rundown: Olivia Wilde v. Shia LaBeouf; the Soul of Soul; the Terrorists Lose
StudioFest Uses VR to Recreate the Simple Experience of Watching a Movie in a Theater