I knew that jumping into the warped mind of director Panos Cosmatos to make Mandy was going to be an experience out of the ordinary.

A conventional revenge story at first glance, the film explores love and loss at its core, and breaks genre boundaries by way of a visceral acid trip of sorts as we follow Red (Nicolas Cage) as he avenges the death of Mandy, (Andrea Riseborough), his one true love. Mandy’s production presented many complicated hurdles, which were intensified since I arrived on the project only a few weeks before principal photography began. Cage broke his ankle on the set of another film, which delayed the production and ultimately rendered the original cinematographer unavailable. Panos and I knew each other through mutual friends, and although we had never worked together, this gave me a jumpstart into the film, as well as his mind, as I had an idea of what to expect from the process.

Panos had a clear idea of what he wanted to achieve, and our conversation began with a specific list of visual references ranging from Black Rain to Fist of the North Star, as well as a carefully curated playlist of music ranging from Van Halen, to Electric Wizard, to Ennio Morricone that he had shared with the film’s composer, the late Johann Johannsson. Our goal was to create a look that would take the viewer back to the prime years of ’70s, ’80s and early ’90s action movies—paying homage to the ways in which each of those eras was influenced by the films of Panos’ father, George Cosmatos—and then augment them into the realm of expressionism.

Early in the process we agreed that the film needed to be shot on anamorphic lenses, with no room for handheld aesthetics. We opted for Primo Anamorphic lenses—which, by the pure nature of their size and weight, eliminated any chance of the camera ever being rigged onto my shoulder. Ultimately we ended up with a generous Alexa Mini package supplied to us by Panavision.

Another equally important task was to create as much of the film’s imagery in camera as humanly possible. Our locations played a crucial role in this part of the process, so Panos and production designer Hubert Pouille spent a lot of time together designing and building sets within these environments. One of our more challenging days involved filming in a quonset hut—a lightweight, metal barn of sorts—redesigned as the chemist’s lab. (Naturally, in the case of a film like Mandy, this scene also involved a real tiger.) 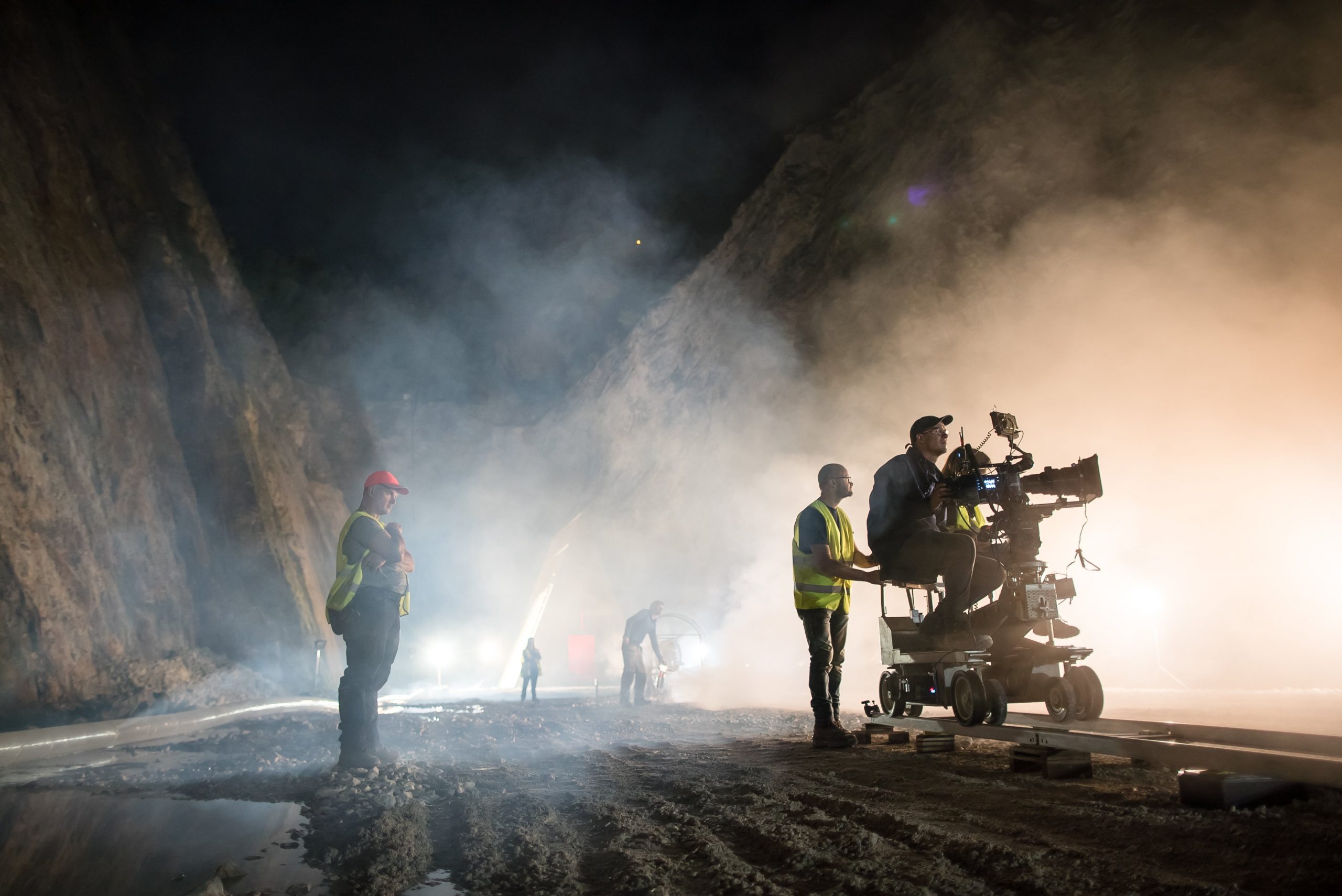 My gaffer Dirk van Rampelbergh installed 15 DMG SL1 LED fixtures in the ceiling all controlled through DMX (a Digital Multiplex that synchs lighting units together to create or control sequences), which was covered by a thick frosted plexiglass roof for added diffusion within the set-build. Our tight shooting schedule forced us to keep the lighting design, as much as possible, a part of the set in order to move faster on the shooting day. Panos loves adding flares to the scenes, so we always had a small dedo light available to help push in a flare from our key side, along with a small LED tube which we often fixed to the front of the lens.

My camera assistant Myriam Amouri and I tested every possible color filter combination we could get our hands on to make a cocktail of filtration specifically for each location. We ended up with a mix of coral, chocolate, and tobacco filters, as well as our pure red color, which became a very important tool throughout the film itself, and, of course, our trusted ND grads (graduated neutral density filters) that could never be far enough into the frame. This was always a fun conversation for Panos and me, as we considered how heavy we could go, and how far into the frame the grads could be.

One of the more memorable behind-the-scenes struggles befell our hard working SFX team, who were in charge of a long list of things including blood (of which there was never enough) and smoke. We often had incredibly long stretches of tubes on either side of our frames in the forest in hopes that the wind would carry the smoke into the right areas, as well as a few propane smokers as a backup when the tubs did not perform their duties well enough.

Another key element in a revenge movie is the act of revenge itself, and in Mandy, that act involves complex elements… like, say, a chainsaw fight. This specific sequence was one that had been integral in the early concept package for the film. Panos chose a location at the bottom of a massive quarry, where we were surrounded by 100m rock walls and shot for three days—only one of which was allocated to the fight itself. I knew multiple camera angles were needed, and since the budget and crew size didn’t allow for cherry pickers and cranes to lift our lighting units into the air, we opted to build our lighting plan from the ground up. This included a range of work lamps that were safe to be on camera, as well as industrial lights we placed tactically around the quarry to illuminate any areas we needed. Lastly, we used rows of string lights, nine-lights, and blondes to grant the slightest bit of texture to the rock walls around. My key grip, Temoudjine Janssens, and I designed a very simple layout of dolly tracks so we could follow the action easily to give us range from one position. These fighting sequences were also the only ones in the film shot on two cameras to make sure we could get through the sequences within the shot amount of nighttime we had during the Belgian summer months.

Our cast and crew endured some difficult days off the beaten path, from rainy smoke-filled forests, to deep underground bunkers and caves. And even though Nicolas Cage is the one actually going through Mandy’s on-screen trip, we couldn’t help but feel like we were tripping along with him.

A very mixed package, but lots of SkyPanels and LiteMats