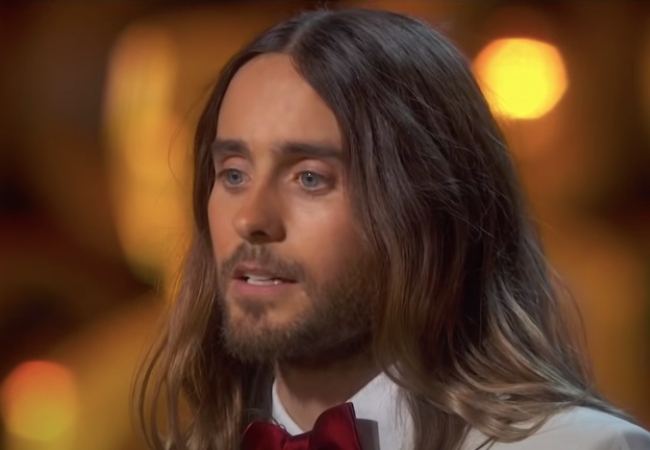 The poster for Ridley Scott’s upcoming House of Gucci movie is out, and surprisingly, stars Lady Gaga and Adam Driver are not the center of attention. Instead, what’s got the internet talking is Jared Leto — and the many layers of prosthetic makeup that make him all but unrecognizable.

Joining Driver, Gaga and Leto is a long list of other stars including Al Pacino as Aldo Gucci, Salma Hayek as Pina Auriemma, and Jeremy Irons as Rodolfo Gucci.

But despite sharing a poster with Pacino, Irons, Driver, and Gaga, Leto undoubtedly stole the show in terms of sheer shock-value.

“This being Jared Leto is sending me like no other,” Michael Cuby, editor-at-large at Them., wrote on Twitter.

Others couldn’t help but notice some similarities between Leto’s character and Transparent actor Jeffrey Tambor.

Also Read: This JAWS Camera Operator Has Dedicated Her Life to Protecting the Ocean — and Sharks

Others chalked it up to Leto’s proclivity for transforming into his characters.

Film and awards writer Will Mavity imagined a conversation between Leto and his agent:

“Jared Leto’s agent: ‘Jared, we have a potential new project for you. You’d be wearing prosthetics and makeup. Let me tell you what they movie is abou-‘

He posted the joke alongside pictures of Leto as Joker in Suicide Squad, as Dr. Michael Mobius in Mobius, and as Albert Sparma in HBO Max’s The Little Things.

One fan called Jared Leto “the chameleon” and pointed out his transformations in Mr. Nobody and Dallas Buyers Club.

Journalist Maggie Serota joked that he looked like a certain detective from the 1990s drama series NYPD Blue.

“Jared Leto in the role he was born to play…NYPD Detective Andy Sipowicz,” Serota joked.

But journalist Chris Feil couldn’t help but notice the resemblance between Leto, Pacino, Driver, and Irons’ characters and those billboards you might see for a certain type of lawyer on the side of the highway.

“Have you or a loved one been injured in an accident?” he joked.

See the poster and all of the tweets reacting to it below.

This being Jared Leto is sending me like no other. pic.twitter.com/4tsXT53PJw

Jared Leto’s agent: “Jared, we have a potential new project for you. You’d be wearing prosthetics and makeup. Let me tell you what they movie is abou-“

Jared Leto: “You son of bitch, I’m in” pic.twitter.com/zX4GAxbsgN

Jared Leto in the role he was born to play…NYPD Detective Andy Sipowicz pic.twitter.com/6RaeWcRLiJ

Have you or a loved one been injured in an accident? pic.twitter.com/fuCPcwSbXw

this is a petty gripe, but it's SO ridiculous to cast jared leto (second from left) in a role that could be played by any average-looking character actor. https://t.co/Tj4DoFO8lm

Jared Leto and some man claiming to be Jared Leto. pic.twitter.com/WAIBrXzwRr

Main Image: Jared Leto accepting his Oscar for Best Supporting Actor for his performance in Dallas Buyers Club in 2014.

How I Earned the Job of Directing My Lifetime Movie, You’re Not Safe Here
The Green Knight Director David Lowery on Four Arthurian Films That Influenced His Dev Patel Epic