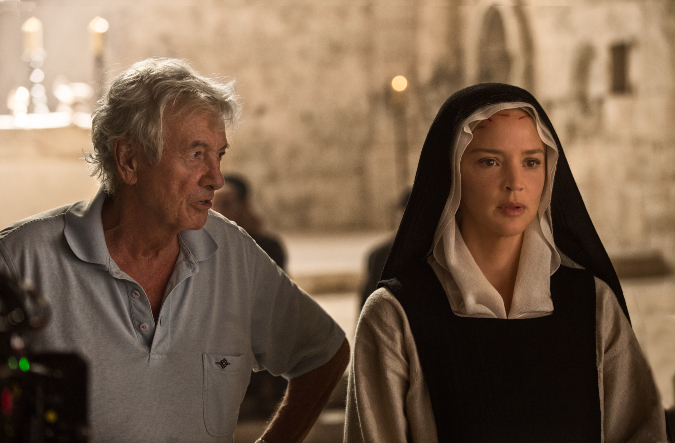 Paul Verhoeven is the rare director who makes hit films that also invite deep analysis. They’re often violent, and sexual, but whether the over-the-top elements are sincere, satirical or both is open to debate.

Below, the provocateur reveals his secrets. —C.H. 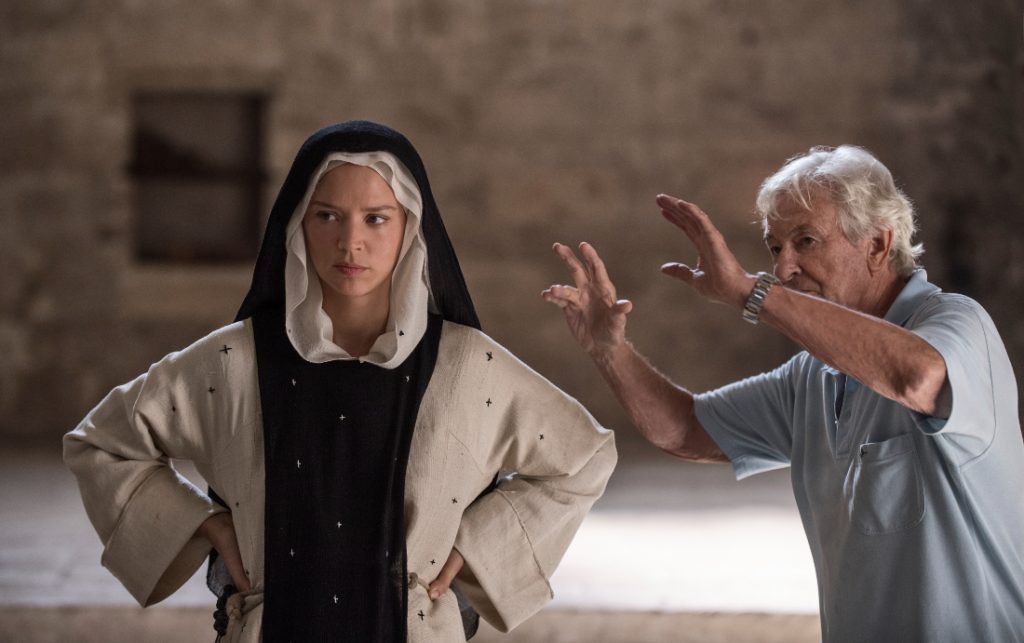 Virginie Efira and director Paul Verhoeven on the set of Benedetta. Photos courtesy of IFC Films.

1. In a career, there are ups and downs. There are films that are successful beyond your expectations, like Basic Instinct, or in Holland, Turkish Delight. And there are movies that you thought were nice, and people didn’t like them at all, notably Showgirls.

Often in my own career, I had the feeling that my interests and what I liked were quite similar to what the public liked. I had the feeling that even if I invented things, that my thinking was not so different from the majority of people on earth. But there are a couple of times that didn’t work that way at all.

2. You need some success, because movies cost money. Film is an economic thing and an artistic thing. So if you don’t acknowledge the economic aspect of movies, your career is going to be very short.

If you are a painter or a composer or even a writer, it doesn’t matter. It doesn’t cost anything. A little bit of paint and a place to paint — it’s not expensive. A composer is just, in fact, writing scores — it’s just paper. The same applies to writing a book.

A movie, from the beginning, involves money. It’s not one person doing one thing in his room. This is immediate from the beginning. It’s a couple of people and it gets bigger and bigger as you move forward to production. Is a movie profitable? Did the people that put their money in get their money out? You have to be aware of these things as a director. Your career will be short, if you cannot reach the public with your first one, two, three movies.

3. With RoboCop, I wanted to show that it was in the future. That meant the environment had to be changed. I would do something like Blade Runner. Knowing that the budget was $13 million, producer Jon Davison told me, “That would be wonderful. But we have to choose between the backgrounds or the RoboCop costume. We cannot afford both.” And so basically, that’s what was decided… or was forced. It was good that we did not try to change the city into something spectacular, but we were putting all our cards and all our money on the costume of RoboCop.

It’s not only your own capacities and creativity that make a movie. The writer, the producer, and even the DP are very important for the success of the movie. They can help you get to the end, like Jon Davison ultimately did. There are at least six or seven people that decide the destiny of a movie outside of the director.

4. Sexuality is essential for life. Without sexuality, there are no babies. Without babies there is no species. You should at least think that sexuality is as important to survive as oxygen. If you don’t feel that way, it is difficult to defend showing it. But if you feel, like I do, that one of the most important things in life is sexuality, then I don’t know why there would be a problem to show sexuality.

I have a problem with this kind of Puritanism that there is now. As if we are not animals. We are. We come from primates. By hiding sexuality, you are trying to say we are not animals, we are something different. But we are not. Violence is another factor of the universe — that building up and destruction.

Violence is probably one aspect of our universe that is also dominant. But we have no problem in going to the utmost in showing violence. But there are problems in showing two naked people.

So don’t worry about it, when you ought to do a sex scene. I’m a little bit unclear what the problem is. 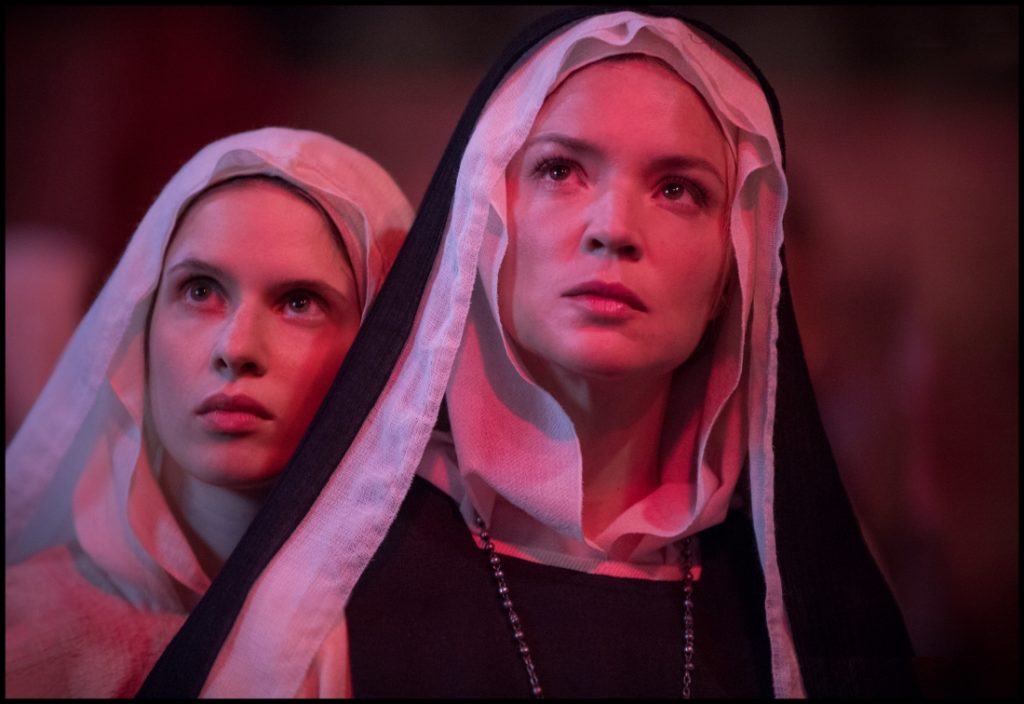 5. I would not advise other directors to try satire, if that aspect is not part of their lives. I don’t do satire because I want to do satire. It’s my way of looking at things in a certain way, that’s often helped by the satire.

I’m working now with Ed Neumeier, who wrote RoboCop with Michael Miner, and later wrote Starship Troopers. We are working on a new project and when we have meetings, we are often really laughing because we come up with these satirical things without trying to be satirical. It’s difficult to say you have to be satirical if that’s not a thing in your life that plays anyhow — that you look at things that way.

It just pops up. If you force yourself to do it, I often think it’s over the top.

6. The actors and the crew have to like the script. Then they come to the set motivated, because they want to make it work. I was educated as a mathematician. Only much later, I decided to leave mathematics and become a film director. But I was afraid of actors. You have to learn how to talk to actors and actresses. And then you make mistakes. They are basically nice people, they forgive your mistakes, and slowly you get to a point where you feel that you can really talk to any actor or actress to make clear what you would like. In my own life, it’s extremely rare that when I explain myself and explain the scene, that people refuse to do it.

7. That is also certainly true about nudity and sexuality. To go back to sexuality, it’s important that if you do sexuality or nudity, then it has to be made extremely clear to the actor and actress what the shots will be. Whenever there was nudity, I had storyboards. We discussed the storyboards with the actors and actresses, every storyboard on its own. Every actor and actress knows not only his dialogue, but also his position, and what kind of nudity will be used. That has to all be done before one shot of the movie.

The actors need to know precisely what the shot will be and from what corner, how far away, what lens. When I showed Michael Douglas and Sharon Stone the storyboards of the sex scene for the first time for Basic Instinct, they were like, What? But when we were shooting, there was no problem at all. We didn’t discuss anything anymore, because it was choreographed. I didn’t have to tell them what to do.

Camera moves that are visible take you out of the story. If you make a really dominant movement, the camera rotating or whatever, you know that there is a camera. My actors move, because I want the camera to move.

9. I have been building my visuals by looking at Alfred Hitchcock, Ingmar Bergman, and Sergei Eisenstein movies. I have studied these movies forever, and I’m still studying them. It’s not too difficult to see that Basic Instinct is heavily influenced by Hitchcock’s Vertigo.

I have learned an enormous amount by looking at other movies, be it Rio Bravo or Sorcerer. I often use elements, tricks, staging, or timing from other directors. Look at movies that you admire. Studying them 10, 20, 30 times is very helpful.

10. With RoboCop, we integrated elements that were not in the script. Ed and I were just walking through looking at locations, and those locations inspired us to change the scene. It was never heavy-handed. Oh that’s fun! Look at that. Let’s shoot there! There is a scene at the end where the bodyguard is shot — RoboCop walks over the water and kills him. By coincidence we came to that factory and saw these walls that looked like the walls of a castle. The elements were there, the whole thing was a gift. But you have to see the gift. You have to see that there is something that is not in the script, but you should absolutely do it. That happens often.

Even with your actors and actresses, give them the possibility to change. Get a director of photography that will come to you and say, I have a better angle. What about this? Can we not do that? Et cetera. I listen to that. Most of the time they are right, but sometimes you have to say, No, I don’t believe so, because of this and that. Be open-minded on the set for what your actors and your crew can add. There has to be a certain democracy on the set, so that the director is not the dictator. He should be the leader of democratic events.

Benedetta, directed by Paul Verhoeven, opens in theaters on Friday.

Main image: Paul Verhoeven and Virginie Efira on the set of Benedetta.

What House of Gucci Got Exactly Right — and Just Made Up
HBO’s Life of Crime: 1984-2020 Doc Almost Had a Very Different Ending