How Paul Verhoeven Lucked Into That RoboCop Walking-on-Water Scene 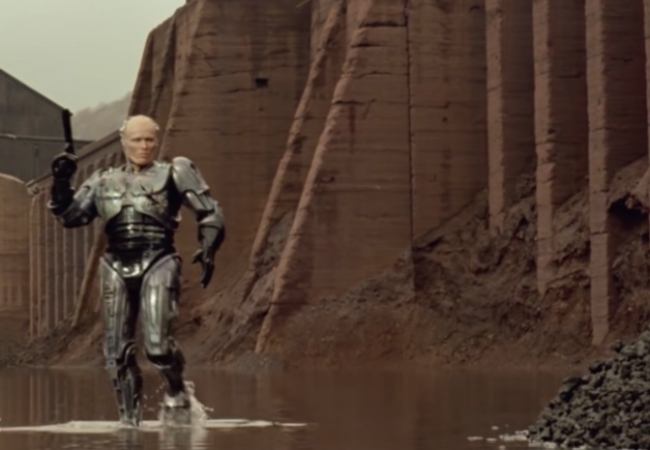 For some Robocop fans, the 1987 action hit is just the story of a half-man, half-robot who is all cop. For others — including Robocop director Paul Verhoeven — its a retelling of the life and resurrection of Jesus Christ.

The 1997 film drops a big hint about that interpretation in a scene in which Robocop, like Christ, walks on water. But Verhoeven haas also spelled it out explicitly, as when he told MTV in 2010 that Robocop was “the American Jesus.”

“The point of RoboCop, of course, is it is a Christ story. It is about a guy that gets crucified after 50 minutes, then is resurrected in the next 50 minutes and then is like the super-cop of the world, but is also a Jesus figure as he walks over water at the end,” Verhoeven said.

In a more recent interview with MovieMaker, Verhoeven says that he owes that walking-on-water moment in part to stumbling on to a perfect location while walking around with Robocop co-writer Ed Neumeier.

“With RoboCop, we integrated elements that were not in the script. Ed and I were just walking through looking at locations, and those locations inspired us to change the scene. It was never heavy-handed. Oh, that’s fun! Look at that. Let’s shoot there!”  Verhoeven told MovieMaker.

“There is a scene at the end where the bodyguard is shot — RoboCop walks over the water and kills him. By coincidence, we came to that factory and saw these walls that looked like the walls of a castle. The elements were there, the whole thing was a gift. But you have to see the gift. You have to see that there is something that is not in the script, but you should absolutely do it. That happens often.”

Also Read: Beta Test’s Jim Cummings on How to Make DIY Films and Put ‘Hollywood’ Out of Business

Verhoeven also made it clear that RoboCop didn’t have an unlimited budget, so he couldn’t go as all-out with production and as he might have liked to. Instead, he had to make do with what he had, which can often lead to magic.

“I wanted to show that it was in the future. That meant the environment had to be changed. I would do something like Blade Runner. Knowing that the budget was $13 million, producer Jon Davison told me, ‘That would be wonderful. But we have to choose between the backgrounds or the RoboCop costume. We cannot afford both.’ And so basically, that’s what was decided… or was forced. It was good that we did not try to change the city into something spectacular, but we were putting all our cards and all our money on the costume of RoboCop,'” Verhoeven said.

“It’s not only your own capacities and creativity that make a movie. The writer, the producer, and even the DP are very important for the success of the movie. They can help you get to the end, like Jon Davison ultimately did. There are at least six or seven people that decide the destiny of a movie outside of the director.”

The full interview with Paul Verhoeven is in our fall print issue, on newsstands now.