Only Murders in the Building: How Selena Gomez Became the ‘Alien’ Among Two Comedy Legends 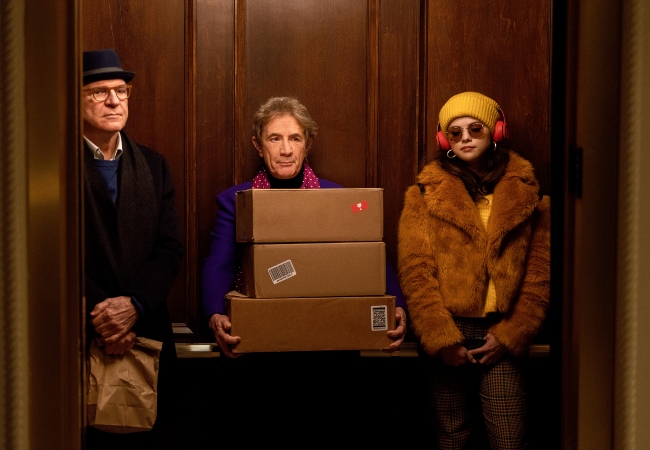 Selena Gomez may seem like an unlikely companion to star alongside comedy heavyweights Steve Martin and Martin short in Hulu’s upcoming murder-mystery series Only Murders in the Building.

But that’s exactly what showrunner and co-creator John Hoffman wanted.

“Don’t we want an alien in their world? The thing that we’re not expecting, that doesn’t make sense?” Hoffman remembers telling Martin, with whom he shares creator credit, in an early discussion about the show, he told the New York Times.

Produced by This Is Us creator Dan Fogelman, Only Murders in the Building stars Martin and Short as Charles and Oliver, two washed-up showmen who share a fascination with true crime. When someone in their New York City apartment building is murdered, they meet their younger neighbor, Mabel (Gomez), and the three of them find themselves caught up in the investigation.

Fogelman told the Times that Gomez had originally been the archetype they were using as an example while planning out the wildcard character of Mabel, only to learn that the Lose You to Love Me singer actually had her eye on the role.

Despite the odd pairing, Gomez felt right at home with Martin and Short, who she lovingly referred to as her “crazy uncles.”

“You can kind of tell in the first episode, where I feel like I was a bit timid,” she told the Times. “You can also see throughout the season how I got more loose and comfortable.”

“They were wonderful with giving advice, even just about my personal life. I’d ask them all the questions that girls ask, like, ‘So, when did you guys first fall in love?’ I’d ask them about boys and dating. They’d be like, ‘Well, make sure he’s kind.’ They were just so sweet,'” she added. 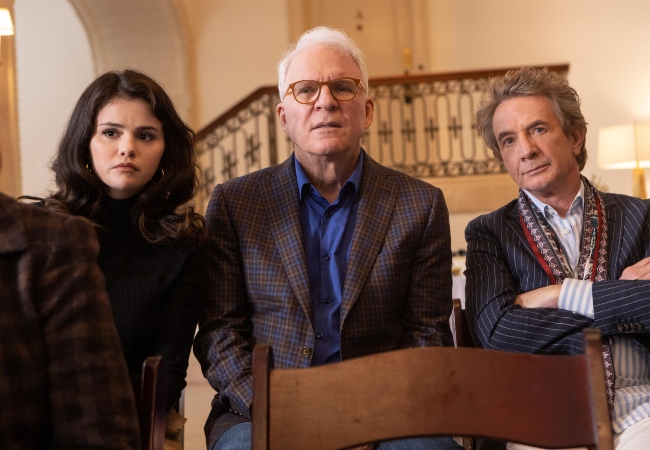 (L-R) Selena Gomez, Steve Martin and Martin Short in Only Murders in the Building, courtesy of Hulu.

Plus, she says their on-screen relationship in Only Murders in the Building isn’t too far off from reality.

“In real life, if I had met two older men that were into solving mysteries, I would totally bond with them in the same manner,” she told the Times.

Gomez told Variety in another recent interview that she felt like a “sponge” absorbing Martin and Short’s wisdom and experience.

“I’ll just ask them random questions. It means so much to me, and allows me to want to be as good as them,” she told Variety.

Despite their wide gulf of an age difference — Gomez recently turned 29, while Short is 71 and Martin is 76, putting more than 40 years between them — she’s able to keep up with them just fine.

Martin says her comedic talent — which both he and Short praised, according to the Times — offsets his and Short’s on-screen dynamic in just the right way.

“Two people can be having a scene, but the laugh comes when it cuts to a third person who’s looking in,” Martin said. “Selena can really do that. She has this posture, like, ‘Are you two children?’”

It makes sense that Short and Martin would have such playful chemistry — the first movie they starred in together was The Three Amigos! in 1986 alongside Chevy Chase.

Gomez, meanwhile, got her start on television, appearing on the children’s show Barney as a child. She later became a star on Disney’s Wizards of Waverly Place. This is her first time returning to TV since then, though in the interim she’s starred in Harmony Korine’s Spring Breakers and Jim Jarmusch’s The Dead Don’t Die. She’s also an executive producer on Netflix’s 13 Reasons Why.

“You have comedy icons Steve Martin and Martin Short, and then you have truly one of the biggest social media presences in Selena Gomez,” Hulu Originals chief Craig Erwich told Variety.”The audience for this thing is very wide.”

Only Murders in the Building premieres Tuesday, Aug. 31 on Hulu. You can watch the trailer here.

Main Image: (L-R) Steve Martin, Martin Short and Selena Gomez in Only Murders in the Building, courtesy of Hulu