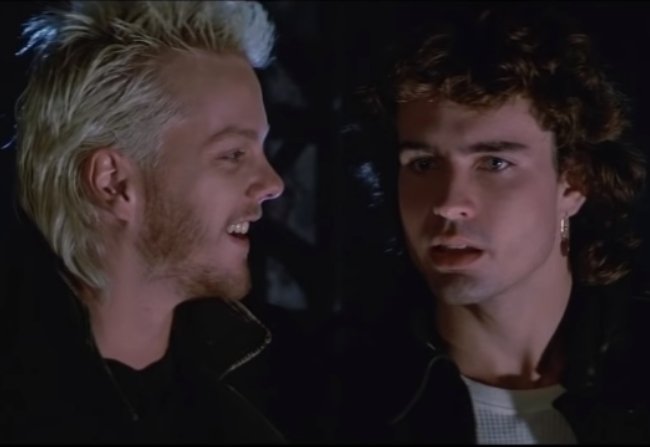 You may want to check your lunch for maggots and worms, because there’s a lot of The Lost Boys nostalgia going on.

People were reminiscing about 1980s cinema, watching movies in actual movie theaters, and Joel Schumacher’s teen horror-comedy about vampires on Friday all because of a viral tweet showing a picture of a sign for movies playing at a mall in 1987.

TV writer Kenneth Palermo tweeted a photo of the sign on Thursday, and the choices — The Lost Boys, Robocop, Predator, or Full Metal Jacket — were such throwbacks for movie buffs and children of the ’80s that the topic began trending on Twitter.

“It’s 1987 … which one do you go to?” Palermo tweeted along with the photo, which you can see below.

“Are you kidding me? I would spend the whole day at the movie theater,” answered one Twitter user.

This person could not resist trolling members of younger generations like Gen Z,  who were born between the tail end of the 1990s and the mid-2000s.

“For you youngins out there, a movie theater is a physical place where you could go sit down and watch movies for a fee,” the user teased. “You could buy popcorn, candy, soda and eat it while watching the movie on a big screen.”

It’s a joke that hits a close to home during a time when a global pandemic has just about shut down in-person movie-going for the past year, and has spelled the end for beloved movie-watching institutions such as the Arclight.

The official HBO Max Twitter account chimed in with some love for The Lost Boys — which is a Warner Bros. film available to watch now on the streaming service — writing, “The Lost Boys number 1 for a reason.”

Actor and Kate & Leopold assistant director George Hahn also cast a vote for The Lost Boys, while others pointed out that the viral picture also includes a sign for the electronics store Radio Shack.

“Radio Shack. It was the best to get to play with the remote control cars there until the employee told me to stop,” wrote user Tony Posnanski.

A self-described former Radio Shack manager replied to confirm that store employees did this, too.

“I used to manager Radio Shack stores back in the 90’s (they actually paid very well) and trust me, the employees played with all the remote-control cars….racing them in malls stores, or out in the streets on strip mall stores LOL,” the user wrote.

Ace of Cakes star Duff Goldman posted a photo of a Lost Boys-themed cake his company Charm City Cakes made for Schumacher, the film’s late director who died last year at age 80.

“Saw ‘The Lost Boys’ trending. Here’s a cake @Charm_CityCakes made for the late great Joel Schumacher. I sat next to him on a plane and he was gracious enough to tell me some incredible stories about the movie,” Goldman wrote.

Another user brought back the gif of the original sexy sax man, Tim Cappello, whose shirtless saxaphone solo featured in the movie’s trailer has made him a 21st-century meme.

See these and more tweets below.

The Lost Boys is trending. You know what that means! pic.twitter.com/aMQ69Bx54p

The Lost Boys number 1 for a reason. https://t.co/oahXQRHH9V

The Lost Boys obviously. Come on. Next question. (Although Robocop and Predator are a close second and third respectively.) https://t.co/A5p5Ikk00y

Saw “The Lost Boys” trending. Here’s a cake @Charm_CityCakes made for the late great Joel Schumacher. I sat next to him on a plane and he was gracious enough to tell me some incredible stories about the movie. pic.twitter.com/a3uz0JmOvM

Main Image: Kiefer Sutherland and James Patric as David and Michael in The Lost Boys. 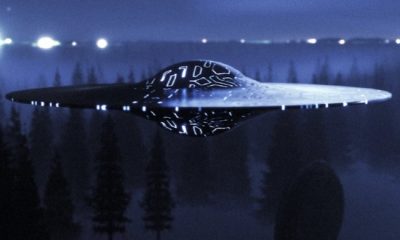 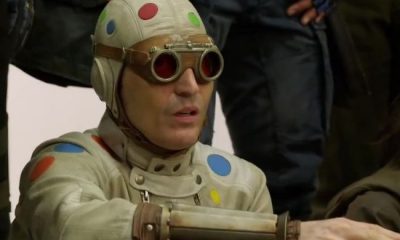