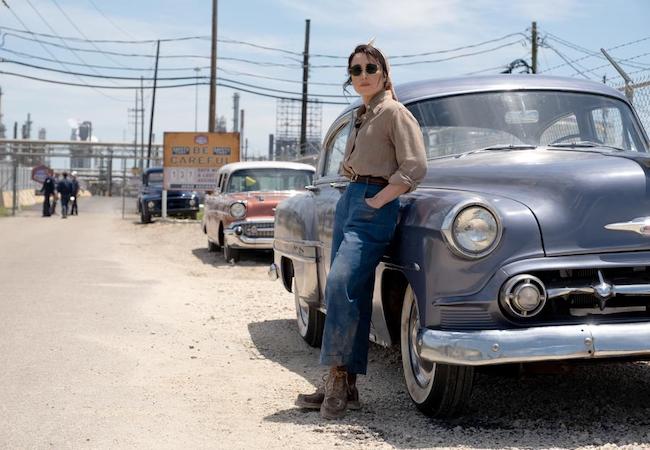 Noomi Rapace, the original Girl With the Dragon Tattoo, is known for intense performances and physical transformations. For her new film The Secrets We Keep, in which she plays a 1950s housewife in search of revenge, she went into full Noomi Rapace mode.

Joel Kinnaman co-stars in the film, directed by Yuval Adler, about European survivors of World War II and the Holocaust whose paths cross again in the United States.

“I don’t want to be pretty. I want to be real. I think it was Joel Kinnaman who said to me at one point he was like, ‘I guess it’s not a Noomi character if you don’t look like shit in the end. I was like, mm-hmm,‘” she tells host Jenny Curtis in the latest Hollywood Unscripted podcast, available on Apple, Spotify and Stitcher.

“One day, Jenny, I’m going to look flawless and be beautiful,” Rapace adds. “But like since day one… I always felt like, why do we women and girls need to be pretty and likable and sweet and adorable and approachable? Why can’t we just be fully humans with all our flaws and all our brokenness and anger and aggression and whatever it is.”

Rapace described her regimen for the film, a six-week shoot.

“I work out once or twice a day. I’m very strict with my diet when I’m working. So I don’t want to go on a sugar rush rollercoaster because it just messes up my whole system. I’m very disciplined. I don’t drink alcohol. I don’t go out. I can’t really put myself in situations where I feel like I add adrenaline to myself. It’s strange, my own discipline and my own mind is probably my strongest tool,” she said. “So I always stick, I almost build up like walls that I could bounce back on. So in the end of the day, I go to the gym, no matter what, and I will sweat out the character. I will take a bath, Epsom salt and ice bath, I go between them. And then I go to bed and I listen to music before or after in the mornings and in the evenings.”

She adds: “And I try to not interact in too many other things. I can’t watch movies. I can’t talk to people really. I try to just stay as protected as possible from the outside world, so I have time to heal and to process and reset my mind and my body for the next day.”

Rapace also recalls one of her very first roles, when she was a small child. She was working on an Icelandic film, and everyone on-set demanded a break after a very long day. The director, she says, was furious.

“I was sitting next to him, just like quiet and like didn’t dare to look at him. And he was like, ‘How old are you?’ I was like seven. He’s like, ‘She’s a real actress. She doesn’t complain. Look at her.’ And I was like, ‘Okay, this is what I got.’ I think from that moment, like he planted a seed in me and I was like, this is where I want to be.”

The Secrets That We Keep, starring Noomi Rapace and Joel Kinnaman, and directed by Yuval Adler, is out Wednesday in selected theaters and available on-demand in October. You can listen here to every episode of Hollywood Unscripted, from CurtCo Media.