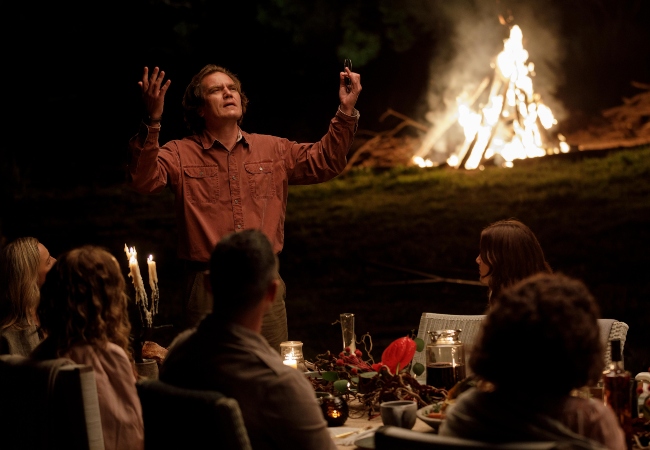 The acclaimed actor, best known for The Shape of Water and Revolutionary Road, plays high school science teacher and devoted father and husband Napoleon Marconi in David E. Kelley’s Nine Perfect Strangers on Hulu. He also plays a man grappling with the loss of his son while on a spiritual retreat run by a mysterious woman named Masha Dmitrichenko (Nicole Kidman), who secretly spikes the morning smoothies with LSD.

Shannon says he “can’t imagine [life] being any trippier than it already is” — so when it came to playing a person tripping on acid, he channeled the stories his friends have told him about doing Ayahuasca, a natural psychoactive plant-based brew originally used as spiritual medicine by indigenous people in South America.

“I’ve talked to a lot of people that have done Ayahuasca, and they say that this is — they swear by it. They say it reveals all the secrets of the universe, but I haven’t dipped my toe in that pool yet,” Shannon told MovieMaker. “If you’re tripping, you can see anything, hear anything — but a lot of times it seems kind of silly. But I don’t know, in this particular story, in this instance, it just made a lot of sense to me.” 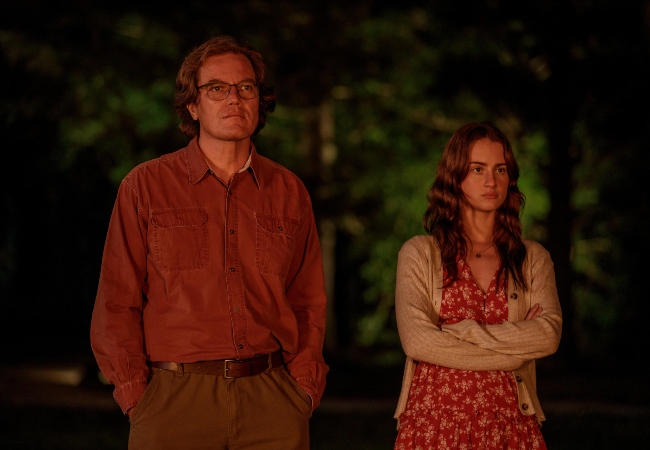 Then there is, of course, the scene where Napolean and Tony Hogburn (Bobby Cannavale) are wandering through a field during their trip when they suddenly see a goat. They both run after the goat, and for a moment it seems like Napoleon will try to save the goat from Tony, who intends to kill it and have it for dinner. But in the haze of acid, Napoleon ends up surprising us by being the one to slay the animal.

“I think that the potential for that is within all of us,” Shannon says of the scene. “I mean, it would have to be, essentially, for no other reason than just purely survival. I mean, people’s ability to survive is basically what I think it’s a symbol of, somehow, you know? Being able to survive this experience that he’s going through.”

Shannon says he did not take lightly the responsibility of portraying a father who has just lost his son to suicide.

“When I was reading it, I thought this was such a delicate subject matter — and when I say delicate subject matter, I mean, my character and his family, the Marconis, are dealing with something that is so unimaginable to me and must be so devastating, and I just wanted to make sure that it was done with a lot of dignity and with the proper amount of respect that it deserved,” he said.

“I feel like with this part I was really, really, super vulnerable, like more than maybe I usually [am],” he added. “It hurts. It was painful. I mean, to imagine going through that, particularly as someone who is a parent, to even remotely spend a minute or two minutes trying to imagine if that happened to one of my children, how I would feel, it’s overwhelming… that particular feeling is just one of the scarier feelings I have encountered in my life.” 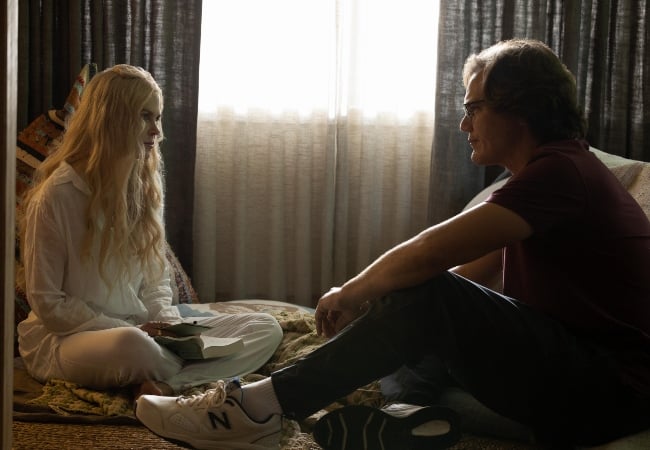 Shannon says that although you might not immediately picture him as a high school science teacher, he felt a deep personal connection to the character of Napoleon.

“This may come more naturally to me than some of the other characters I’ve played. This is certainly — I’m much more like Napoleon than I am like, I don’t know, General Zod [from Man of Steel] or something,” he says. “Napoleon makes a lot of sense to me… there’s just so much going on with this character so much to explore… it’s about something incredibly serious and painful, but that is at the end of the day, what I get paid to do — is try and explore that stuff.”

The first three episodes of Nine Perfect Strangers are now streaming on Hulu. New episodes will air each week on Wednesdays.

Untold: Deal With the Devil: Who Is Boxing Coach Jim Martin and Where Is He Now?
Ted Lasso: Zach Braff Tells Us the Directing Advice He Got From Alexander Payne (Video)