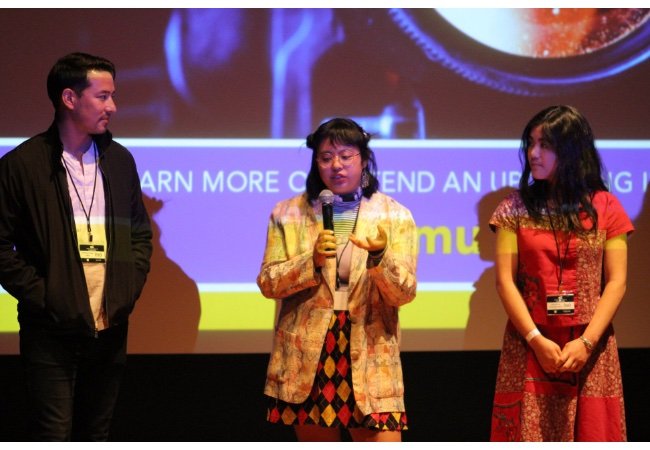 A young actor decides to turn into a cat after being mistreated by the world, a man bumps into his ex while auditioning for a role, and a polyamorous relationship reveals truths about love during turbulent times: These are just a few of the stories highlighted at a recent New Filmmakers Los Angeles film festival that celebrated emerging Asian and Asian-American directors, as well as a feature film from promising writer-director, Victor Neumark.

Powered by Seed&Spark, the virtual festival, held on June 7th, kicked off with InFocus: Asian Cinema, offering stories that emphasize questions of power and the search for meaning. The festival’s second selection of shorts highlighted Asian talent behind the camera, featuring characters who grapple with their societal roles and identities.

The evening concluded with the feature film First Blush, in which a young married couple become involved with another woman, and the three learn to navigate the complications of a polyamorous relationship.

Here are the films celebrated at the festival, and the rising filmmakers behind them.

About Jesse: Born and raised in the Greater Los Angeles area, Gi has experienced a diverse range of cultures throughout his youth, which has inspired so much of his storytelling.

About “Beam”: A down-on-her-luck thief, gifted with a teleportation device, must fulfill one final job in order to save her family.

Watch the NFMLA interview with Jesse Gi, director of “Beam”:

About Jing: Born in Kuala Lumpur and raised between Malaysia and Miami, Jing Ai Ng brings her global perspective to exploring the moral murkiness of the world we live in.

About “FLECK”: An Asian-American teenager at a traditional prep school, longing to fit in with the school’s elite, is forced to choose between her morality and belonging in their exclusive group.

About Eugene: Born and raised in Taiwan, Eugene Suen is now a Los Angeles-based filmmaker showcasing his directorial debut, “Master of Divinity.”

About “Master of Divinity”: The life of a Korean-American ex-seminarian and now-struggling filmmaker is thrown into crisis when his deeply religious wife tells him that God is calling her to quit her job.

Watch the NFMLA interview with Eugene Suen, director of Master of Divinity:

About Zicheng: Zicheng graduated from the School of Cinematic Arts at the University of Southern California while chasing his love for the poetic and emotional qualities of cinema.

About “A Sunburnt Summer”: A single mother has to deal with a dire situation: Her son has been raped by the son of her boss.

Watch the NFMLA interview with Zicheng Li, director of “A Sunburnt Summer”:

About Kyung:  Kyung Sok Kim is a Korean filmmaker based in Los Angeles, whose short films have screened at numerous festivals, such as the Pan African Film Festival, and have won grants from Fotokem, Universal Studios, and the Francis H. Tucke Foundation.

About “Daytime Moon”: Dahyung runs into his ex-girlfriend Rebecca while auditioning for a film called “Daytime Moon.”

About Leon Jianle: After working in the interdisciplinary areas of motion pictures, graphic design, and VR/3D, Leon Jianle Liu defines himself as an “minimalist artist” who specializes in minimalistic aesthetic, non-linear narratives, and theatrical storytelling.

About “What We Talk About When We Talk About Lights, Camera, Action”: When young film director Fan Li Wen comes back to China to direct his first feature, he struggles against the rest of the cast and crew, trying to pitch his new screenplay as the original production starts to fall apart.

About Victor: Victor Neumark is a Los Angeles-based filmmaker who has previously worked as an associate producer on IFC’s Portlandia, Comedy Central’s Corporate, and Hulu’s Shrill.

About First Blush: A young married couple become involved with another woman and learn to navigate the complications of a polyamorous relationship.

“The Cat In Me” directed by Joy Wang

About Joy: Born in Chongqing, China, filmmaker Xuerui “Joy” Wang directed “The Cat In Me” during independent study in her first year at Chapman University, where she studies cinematography.

About “The Cat In Me”: Meno, a small-time actor, gradually finds himself not a submissive fish-like human anymore when he is beaten by life.

Watch the NFMLA interview with Joy Wang, director of “The Cat In Me”:

Godfather Coda: The Death of Michael Corleone Makes a Surprising Change to the End of Godfather III
Sofia Coppola Says Godfather III Criticism Made Her Stronger