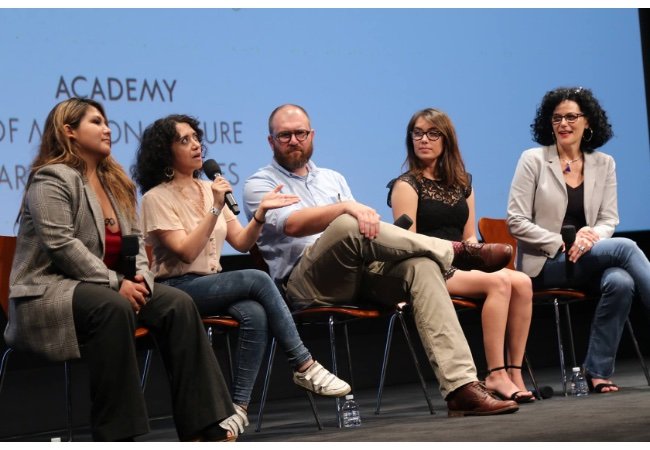 An American Muslim teenager changes clothes behind her family’s back, a man interviews with an ICE agent to see his estranged wife, and a young woman seeks online justice in some of the new films in a New Filmmakers Los Angeles festival focused especially on immigration stories.

Powered by Seed&Spark, the festival kicked off with Sarah Pirozek’s “#LIKE”, an engrossing psychological thriller about a teenage girl who takes justice into her own hands after her sexually exploited sister commits suicide. The festival continued with “Two Autumns in Paris,” directed by Gibelys Coronado, a timely exploration of political upheaval, activism and privilege. The evening’s programming concluded with a collection of short narratives about the immigrant experience.

From the brutality of an immigration raid seen through the eyes of a young girl, to teenagers balancing the expectations of two cultures, this block served as a reminder of the diversity of immigrants’ experiences, and the harsh realities many immigrants face. The festival was held on June 27, 2020.

Here are the films and filmmakers.

About Karina: Karina Dandashi is a Syrian-American writer and director living in Brooklyn who is passionate about women-driven stories that explore identity through the intersection of family, religion, and culture in Arab and Muslim communities.

About “Short Shorts:” An American Muslim teenage girl changes clothes behind her family’s back, hoping to never get caught.

About Carmen: Carmen was born and raised in Guatemala City, which is where she first found her passion for storytelling through acting.

About “American Dream”: A mother struggles to support her family as an illegal immigrant in America.

About Refugio: A married man interviews with an Immigration and Customs agent to validate his marriage and reunite with his estranged wife.

Watch the NFMLA interview with Andres Rovira, director of “Refugio”:

“The Skimmer” directed by Simran Jehani

About Simran: While interning at production companies like Gunpowder & Sky and Amazon Studios, Simran Jehani prioritized storytelling with diverse voices meant to inspire the youth.

About “The Skimmer”: Torn between cultures, a first-generation Persian-American teenager must discover her identity and mend her relationship with her mother.

Watch the NFMLA interview with Simran Jehani, director of “The Skimmer”:

About Gibelys: Gibelys Coronado was born in Venezuela, where she studied cinematography at the Central University of Venezuela.

About “Two Autumns in Paris”: A young political refugee escapes to Paris, persecuted by the Paraguayan dictatorship, and falls in love with a young law student. But she must decide her future, without forgetting her struggle for freedom.

Watch the NFMLA interview with Gibelys Coronado, director of “Two Autumns in Paris”:

About Sarah: Sarah Pirozek is a proud “Air Force brat,” tinted engravings for a fine-art forger, taught art to Bengali refugee kids, toured with her punk band, and was introduced to the world of music videos by Puffy at Uptown, all before working in Film.

About #LIKE: On the first anniversary of her younger sister’s death, a young woman discovers the mysterious man who sexploited and bullied her into suicide. When she sees he is back online trolling for new victims, she decides to take justice into her own hands.

Watch the NFMLA interview with Sarah Pirozek, director of #LIKE:

Two Strangers Tried to Make a Movie Together. What Could Possibly Go Wrong?
NFMLA and the Academy Explore Finding Solace in Tough Times Through Middle Eastern, Arab and Dutch Cinema