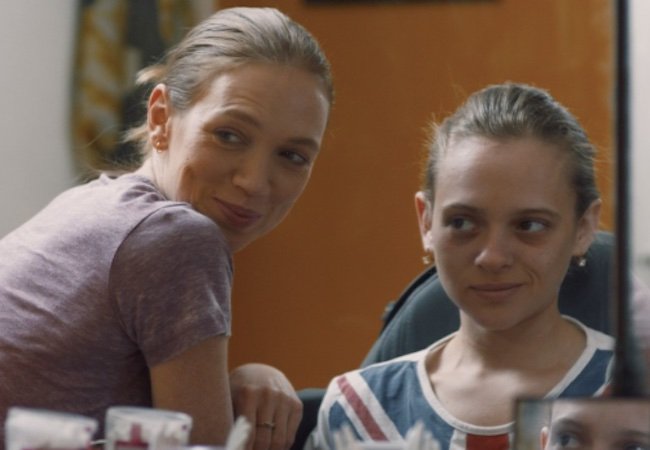 One young man’s humanity is tested by a stolen bicycle. Another becomes an unwitting war hero. A middle-aged Ukrainian woman signs up to meet an American husband. An insecure high school student uses the internet as both a weapon and a shield. And a young woman’s birthright trip to Israel raises questions about her identity. These are five of the stories explored in NewFilmmakers Los Angeles’ first ever InFocus: Israeli Cinema Film Festival.

The festival, which highlighted Israeli talent onscreen and behind the camera, concluded with Ruthy Pribar’s deeply emotional feature film Asia, in which a mother examines her own identity and morality while guiding her daughter through a terminal illness. Asia stars Alena Yiv and primetime Emmy nominee Shira Haas (Unorthodox), and won numerous awards at its Tribeca Film Festival premiere.

NFMLA showcases films by filmmakers of all backgrounds throughout the year in addition to its special InFocus programming, which celebrates diversity, inclusion, and region. All filmmakers are welcome and encouraged to submit their projects which will be considered for all upcoming NFMLA Festivals, regardless of the InFocus programming.

Here are the films, and interviews with the filmmakers.

About Inbar: Inbar Horesh was born in Jerusalem in 1988. She studied filmmaking at Minshar Film Academy. Her graduation film, “The Visit” (67th Cannes Film Festival – Cinefondation) participated in over 50 international festivals, won multiple awards and was nominated to the Israeli Academy Awards. She’s developing her debut feature film, Birth Right (the same title as her short film), and it has been selected to the 42nd session of the Cinefondation residency.

About “Birth Right”: A comic drama that tells the story of Natasha, a young Russian woman, who’s participating in an organized trip to encourage immigration of Jews to Israel. When the group arrives in the desert, two Israeli soldiers join them for the night and the girls all fall for Shlomi, the handsome combat soldier.

About Tomer: Tomer is a writer and director from Israel who graduated from the Film Department of Minshar School of Art, Tel Aviv in 2016. “White Eye,” his second short, won the Best Narrative Short Jury Award in SXSW 2020 and the Best International Short Fiction Award in the Galway Film Festival. He is currently developing his first feature film, “Between the sacred and the secular,” and the Israeli TV series “Torso.”

About “White Eye”: In a single shot, exceeding 20 minutes, a man finds his stolen bicycle, and learns that it now belongs to a stranger. In his attempts to retrieve the bicycle, he struggles to remain human.

About Nir: Nir is a screenwriter and director from Israel who graduated from the Tel Aviv University Film School and the exclusive European screenwriters program, Serial Eyes. He has created several series and films, working in genres ranging from live-action dramedy to animated satire. He has also served as head writer and as staff writer on several series, including the highly regarded sketch show “The Jews Are Coming.”

About “Touch”: Adele is an aggressive, self-conscious 17-year-old girl who spends most of her time trolling her classmates online. When she is hit on by another internet troll, Uri, they flirt until he urges her to send a picture in which she is actually visible.

Watch the NFMLA interview with Nir Berger, director of “Touch”:

About Adi: Adi is a writer, director and producer based in Tel Aviv, Israel. Born in 1988, she grew up in Kiryat Tivon, a suburban town in the north of Israel. She studied film at the Steve Tisch School of Film and Television at Tel Aviv University where she directed and produced several shorts. “Image of Victory,” her debut short documentary, has recently received the grand prize for a short film at CINEMED, France and has won multiple awards in Israel, including a nomination for the Israeli Oscars.

About “Image of Victory”: It’s 2014, and Israel is at war in Gaza again. Uri, an Israeli soldier, is wounded in battle and rushed to the hospital. There, with his worried parents at his bedside, he finds himself unwillingly turned into a war hero — receiving visits by army generals, celebrities, veterans, and hundreds of well-intentioned Israelis, all paying their respects and expecting him to act the part.

Watch the NFMLA interview with Adi Mishnayot, director of “Image of Victory”:

About Dekel: Dekel Berenson is a UK-based writer, director, and member of the Academy of Motion Picture Arts and Sciences. Drawing inspiration from travelling to more than sixty countries, Dekel explores real-world social and humanitarian issues. His film “Anna'” premiered in competition at the 72nd Cannes Film Festival, won the Best British Short Film award at the 22nd BIFA awards and was shortlisted for a BAFTA.

About “Anna”: Anna, a middle-aged single mother, lives in a small industrial town in war-torn Eastern Ukraine. She works in a meat processing plant, lives in a rundown apartment and dreams for a better life for herself and her 16-year-old daughter. Desperate for a change, she is lured by a radio advertisement to attend a party organized for foreign men who are touring the country, searching for love.

Watch the NFMLA interview with Dekel Berenson, director of “Anna”:

About Ruthy: Ruthy graduated with honors from Sam Spiegel Film School in 2012. Her short films “Last Calls” and “The Caregiver” were screened and awarded at numerous festivals worldwide. Asia, developed at the Cannes Festival Residency Program, is her first feature film.

About “Asia”: For Asia, motherhood has always been an ongoing struggle, rather than an obvious instinct. Becoming a mother at a very early age has shaped Asia’s relationship with her teenage daughter, Vika. Their routine is shaken when Vika’s health deteriorates rapidly. Asia must step in and become the mother Vika so desperately needs.

Watch the NFMLA interview with Ruthy Pribar, director of “Asia”: