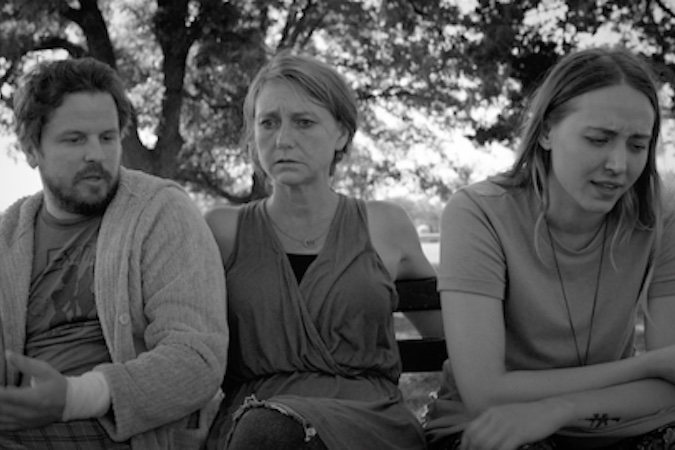 The annual InFocus: Veteran Cinema Program included a collection of horror shorts and the feature-length film She’s the Eldest, directed by Air Force veteran Cate Jones. She’s the Eldest is an unsettling yet hilarious feature film about three siblings whose parents have mysteriously disappearance.

The short films explored — among other subjects — war, family and fear. The Dark Recesses Program wrapped up the October 2020 night by terrorizing its audience with modern takes on folklore, the global pandemic and other horrors.

About Shannon: A U.S. Air Force veteran, Shannon has extensive experience in writing and producing military stories, bringing her aptitude for creative expression to screenwriting and filmmaking.

About “Library Soulmate”: An endearing book lover becomes convinced her soulmate is a fellow member of her local library and is determined to track him down — whether the librarian likes it or not!

About Cate: Cate joined the AirForce and traveled for six years during service in order to return home to Oklahoma, study film at OCCC, and make her own Indie Arthouse films.

About She’s the Eldest: Three eccentric siblings return to their childhood home to reconnect, but they end up digging up the past of their parents’ mysterious disappearances.

Watch the NFMLA interview with Cate Jones, director of She’s the Eldest:

“If You Ever Hurt My Daughter, I Swear to God I’ll Let Her Navigate Her Own Emotional Growth”, directed by Meghan Ross and produced by Justin Ross

About Meghan: Utilizing her background in stand-up and improv, Meghan seeks to confront racial and gender inequities while highlighting the issues causing them as a filmmaker.

About Justin: Justin is a director and producer for We Are Brave Makers, a collaboration of innovative creatives and a production company built for the now.

About “If You Ever Hurt My Daughter, I Swear to God I’ll Let Her Navigate Her Own Emotional Growth”: A stereotypical, overprotective patriarchal figure is quickly revealed to be a progressive, boundary-respecting father of his teenage daughter, Raina.

Watch the NFMLA interview with Meghan Ross and Justin Ross, director and producer of “If You Ever Hurt My Daughter, I Swear to God I’ll Let Her Navigate Her Own Emotional Growth”:

“The Orchestra”, directed by Curtis Matzke

About Curtis: Chicago-based screenwriter and director Curtis is the founder of Unfurnished Films, and he has contributed to dozens of short films and produced four micro-budget features.

About “The Orchestra”: A young woman is haunted by an undead orchestra when she finds herself alone in an empty theatre.

Watch the NFMLA interview with Curtis Matzke, director of “The Orchestra”:

About Brian: Brian believes that the most human stories are often the most explosive, inspiring him to start his filmmaking career and co-find his production company, Wrapal.

About “Sensor”: Haunted by his experiences from the war, a Vietnam War Veteran has had enough and decides to place motion sensors around his property to face his demons once and for all.

About Lynelle: Before pursuing a second career as a television writer, Lynelle was an active duty pilot in the U.S. Air Force.

About Margarita: Margarita has their own independent production company, Besties Make Movies, in addition to their other film endeavors in directing, writing, acting, and producing.

About “2 Weeks”: When 20-something-year-old Tanya realizes she’s asexual, the highly-charged sexualized world she lives in begins to cave in and crush her professional and romantic relationships.

Watch the NFMLA interview with Margarita Zhitnikova, writer and producer of “2 Weeks”:

About Desmond: Lover of horror, action-comedies, and a satire enthusiast, Desmond is a film director and producer that has worked on several award winning short films while continuing his education in Chapman University’s graduate program for directing.

About “Wolves”: A rebellious teenager in New Orleans, desperate for a night of freedom, tries to sneak out of the house until he is stopped by a threatening figure.

Watch the NFMLA interview with Desmond Jackson , director of “Wolves”:

About Sean: Sean Ryan is an award-winning, multitalented screenwriter and filmmaker whose uncharted talents emerged during his five years of military service and after graduating from the U.S. Military Academy at West Point.

About “Realm of Unknowns”: After a couple shares their perplexing dreams in an uncertain future, they must decide whether to find a plant to solve their pregnancy issues despite having doubts on having a child.

Watch the NFMLA interview with Sean Ryan , director of “Realm of Unknowns”:

About Julia: Julia C. Liu is a Taiwanese-American filmmaker and comic artist who first cut her teeth in the film industry as a camera assistant on hit TV shows like Girls and Person of Interest. Liu is a contributing director to the New York Times Op-Doc Series, and has directed and shot music videos premiering on Stereogum and NPR Music.

About Vatic: Vatic is a writer, activist, poet, rapper and creator. He is developing a cycle of plays with Rites & Reason Theatre at Brown University and Trinity Repertory Company.

About “Driving While Black Magic”: Nadege has to work late again, leaving Reggie and their dog Fatboy waiting at their new house. During her commute home she tries to block out the news, as protests erupt in Providence Plantations over another state sanctioned killing.

Watch the NFMLA interview with Julia Liu and Vatic Tayari Kuumba, director and writer of “Driving While Black Magic”:

“Sins In The Synth,” directed by Mario Garcia

About Mario: Mario Garcia is a filmmaker from L.A. who got his start in cinema with the camera and electoral department for various short films.

About “Sins In The Synth”: A drug dealer uses a Synthetic Human to smuggle drugs, but the Synth gains consciousness and frees herself.

Watch the NFMLA interview with Mario Garcia, director of “Sins In The Synth”:

About Kevin: After serving more than 9 years in the Air Force, Kevin became a writer and director, and vice president of Motion Pictures with the Studio Creative Group in Central Florida.

About “Coming Home”: Technical Sergeant Jack Ward, and Senior Airman Danny Spiro wait out a delay at the airport on their last leg home from a long deployment overseas.

Watch the NFMLA interview with Kevin A Kimball, director of “Coming Home”:

NFMLA Film Festival Illustrates Universal Stories of Connectedness, Social Justice and Cultural Identity
Beyond the Infinite Two Minutes Is Like 1917 Crossed With Tenet — But Cheaper and More Fun