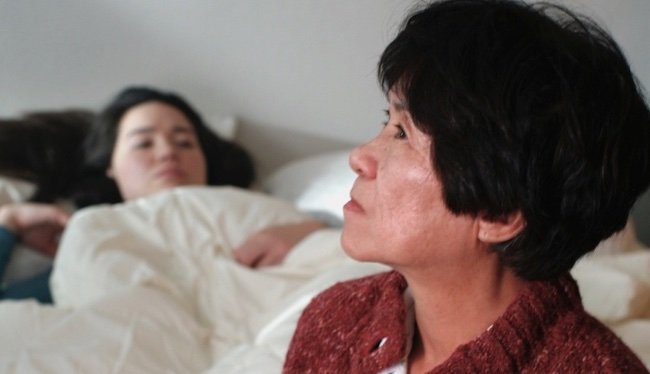 A mother dealing with dementia finds an unexpected connection with her daughter, a group of not-yet-humans anxiously wait to be assigned a life, two sisters draw on ancestral knowledge to regenerate agriculture and a Chinese American woman is confronted by unfinished business with her late grandma. These are just a few of the stories highlighted at the NewFilmmakers Los Angeles (NFMLA) Film Festival that showcased promising female filmmakers tackling stories about family, justice, identity and questioning what it means to identify as a woman in today’s world.

The festival began with InFocus: Female Cinema Documentary Shorts, in which visionary female directors from all over the world shined a light on true stories of women who learn the power of familial bonds, find their journey to justice and question what it means to live as a refugee or a nomad in today’s world.

This section was followed by InFocus: Female Cinema Narrative Shorts, a program that distinguished up-and-coming filmmakers showcasing their vision through work that encompassed a wide range of genres and themes.

The festival continued with InFocus: Female Cinema, programmed and curated in partnership with the Queer Women of Color Media Arts Project. This section celebrated stories about and created by queer women of color, focused on the depiction of inspiring stories pertaining to their experiences and communities.

The festival concluded with the InFocus: Female Cinema Feature screening of the bold and exquisitely witty Fall Back Down, the feature film directorial debut of award-winning writer-director SB Edwards.

Here is some info on the filmmakers and their films as well as their video interviews with NFMLA Board Chair, Danny De Lillo (Twitter/Instagram: @dannydelillo).

About Ainamkoz: Ainamkoz graduated from New York Film Academy. She made her first short film in 2017, titled “Sisters Race.” The romantic comedy was a finalist at the Central American Short Film Festival in 2018. “Qÿyrshaq” marks her second short film and she is currently in post production on “Gulmira” a psychological drama.

About “Qÿyrshaq”: When Soviet soldiers take advantage of their position, a grandfather goes to extreme measures to protect his granddaughter. The film was a finalist at the Student Los Angeles Film Festival in 2020, an Official Selection at the Beeston Film Festival 2020, and Cherkasy Short Film Festival “Kinoshot” 2020.

“Women of the Earth”, directed by Chiara Hollender

About Chiara: Chiara is an Iranian-American documentary director-producer currently based in Burlington, Vermont. She uses storytelling to create representation for unheard narratives, and hopes to harness media as an outlet to explore the ways in which colonization and homogenization of our societies affects the psyches of girls growing up in today’s world. She’s produced work for the DIY Network and Discovery Channel, and has worked for AMC Network and Silent Crow Arts in NYC.

About “Women of the Earth”: Two sisters in the Hudson Valley draw on their familial farming practices, using hemp to heal soil while blazing a trail in regenerative agriculture.

Watch the NFMLA interview with Chiara Hollender, director of “Women of the Earth”:

About Delaney: Delaney is a writer and director based in Los Angeles. Having grown up in Florida, she has a natural interest in the bizarre which influenced her love for offbeat documentaries. Delaney’s directorial debut, “The Spring,” a short documentary about a mermaid amusement park, premiered at the 2017 Tribeca Film Festival. Most recently, she wrote and directed “PAL,” a very short romantic comedy, which is an official selection for the LA Comedy Festival.

About “Wallace”: The documentary, which premiered at the 2019 Sun Valley Film Festival, is a trip to the past of a community where prostitution was deeply ingrained for over a century. It is set in the tiny mining town of Wallace, Idaho, where brothels were open and tolerated up until the year of 1991.

Watch the NFMLA interview with Delaney Buffett, director of “Wallace”:

“Before,” directed by Julia Monahan

About Julia: Julia is a first-time director determined to tell stories that make us question how well we know ourselves. As a writer, she has been recognized by the 2018 New York Television Festival and the 2016 Austin Film Festival, and her web series was awarded by the 2017 Brooklyn Web Fest. Julia’s production credits include Silicon Valley, Brooklyn Nine-Nine and Barry.

About Lauren: Lauren is the manager of Creative Producing and Artist Support for the Sundance Institute Feature Film Program. She has worked in development at Pixar Animation Studios, where she supported in-house filmmakers in the earliest phases of their creative process, including Pete Docter’s Soul. Most recently, she was a co-producer on The Ball Method.

About Emi: Emi is a Japanese-American filmmaker and actor. She earned a Master of Entertainment Industry Management from Carnegie Mellon University and a B.A. in Public Policy from the University of Virginia, where she also studied acting.

About “Before”: A group of not-yet-humans bide their time in a perpetual waiting room. As if enduring an eternal DMV visit, visitors in this room wait for thousands of years for their numbers to be called to be assigned a life. Some are anxious, some are hopeful, and others are defeated by impatience before their earthly lives have even begun. But for the first time ever, as these visitors watch and worry and wonder, one number is called out over and over, as every visitor rejects this life.

Watch the NFMLA interview with the team behind “Before” — director Julia Monahan, producer Lauren Lukow and actor Emi Ellis.

About Narissa: Narissa is writer, producer, director and editor in both corporate and artistic projects. Her short films have screened in both national and international film festivals.

About “Adrift in Sunset”: A mother, afflicted with dementia, reflects on her love for her daughter and reveals her sentiments in an unexpected and beautiful way.

Watch the NFMLA interview with Narissa Lee, director of “Adrift in Sunset”:

About Nicole: Nicole is a French-Mexican director and a BAFTA Newcomers fellow. Her directorial work has screened at AFI FEST, Out On Film, Women in Film & Television, among others. Through her work, Nicole is interested in exploring intimate relationship dynamics through female characters dealing with identity conflicts. She is currently developing two feature scripts and a half-hour series.

About “Elle”: In late ’90s in Southern California, 16-year-old, introverted Elle finds herself in love with her best friend, who is about to move away. The film premiered at the Academy-Qualifying Rhode Island International Film Festival and won the Grand Prize Marlyn Mason Award given for new voices, new perspectives by women in film.

About Rey: After being inspired by Asian-Americans through YouTube, Rey began writing scripts and making short films in the seventh grade. She studied Radio, Television and Film at Northwestern University, and has won several awards for her work from high school to college. Currently, Rey is the writer and director of “Emergence,” and hopes to give a voice to queer women through her work.

About “Noodles & Incense”: Chinese-American cook Amy Chang wants to move to Los Angeles with her girlfriend Megan, yet is held back by unfinished business with her late grandma.

“The Birth of Valerie Venus”, directed by Sarah Clift

About Sarah: Sarah is a writer-director from the United Kingdom, currently developing her strong vision and unique voice on several long format projects, including her debut feature “Two Old Maids” with the BFI. In 2016, Sarah wrote and directed her first short film “La Madre Buena” which arose to immediate acclaim, screening at Academy and BAFTA recognised festivals, receiving 50 wins and nominations.

About “The Birth of Valerie Venus”: A selfless vicar’s wife is possessed by a strange force, unlocking a mysterious and pleasurable side of her that she was unaware of. The short qualified for Academy Award consideration and awards include HollyShorts, UCLA Ext, InterFilm Berlin as well as a Gold YDA.

Watch the NFMLA interview with Sarah Clift, director of “The Birth of Valerie Venus”:

About Melanie: Melanie is a writer, actor and director. She graduated from Emerson College’s highly competitive Bachelor of Fine Arts Acting program, she has been featured in various films, TV shows and commercials, including “Sick for Toys,” Hulu’s “Dimension 404,” and “Charlie,” which she wrote, directed and produced. Her shorts and screenplays have been recognized by a number of festivals, including WeScreenplay’s Shorts Contest, the Diversity Film Festival, and the Top Indie Films Awards.

About “Two Weeks Notice”: The film follows a man who gives his girlfriend two weeks notice before ending their relationship.

About Samantha: Working as an actress during her teens, she appeared in titles such as The Worlds End, Casualty and Little Crackers. Samantha is currently in the final year of film school at EICAR International located in Paris. She developed the script for her directorial debut after winning a place on the BFI Film Academy’s screenwriting residential course.

About “Friends Online”: The film follows Stacey, an anxiety-ridden, lonely, keyboard-warrior recluse who hopelessly tries to convince his favorite young friend Ellie that he, too, is a teenage girl, with the desperate hope that she’ll send him the pictures he craves. But all is not all is as it seems online, especially when others are listening in.