NFMLA Celebrates Native Cinema with an Inspiring Drag Queen, a Dying Teenager and a Hard-of-Hearing Dancer 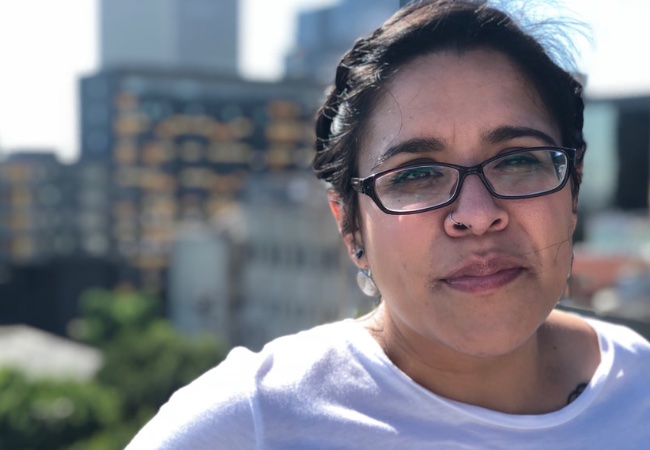 Stories of an inspiring drag queen, a dying teenager and a hard-of-hearing dancer loomed large at a recent NewFilmmakers Los Angeles celebration of Indigenous Cinema.

NFMLA featured filmmakers of all ages and backgrounds in the festival. Middle-schoolers and high schoolers from the first program, Youth Cinema, inspired a call to action against global catastrophe. InFocus: Indigenous Cinema Shorts, highlighted obstacles faced by different Indigenous peoples. Themes of identity and mortality carried over into the next program, Mortal Bodies, in which individuals battled mortality. The festival concluded with Tyler Savage’s Blinders, a modern horror tale.

Here are interviews with the NFMLA filmmakers, and details on their films.

“When the Children Left,” directed by Charlene Moore

About Charlene: A Winnipeg filmmaker and member of York Factory First Nation, Charlene Moore is passionate about storytelling and highlighting Canadian issues that affect Indigenous Peoples. As a Cree, Saulteaux, and Welsh woman, Charlene creates films that focus on identity, connection and resilience.

About “When the Children Left”: For generations, Angelina McLeod’s community of Shoal Lake 40 First Nation has been forced to send their children away for schooling. This intimate documentary follows Angelina as she travels back home to honor the spirit of her sister, Amelia McLeod.

Watch the NFMLA interview with Charlene Moore, director of “When the Children Left”:

About Yiru: Utilizing her B.A. in Film & TV Production from NYU Tisch School of the Arts, Yiru’s produces creative writing and multimedia visuals that extend her interests in the arts to activism.

About “Handscape”: Xia Qing, a boy who has been wearing Cochlear Implants due to hearing impairment, has a deep love for dancing — but his mother’s reluctance to accept him obscures his self-identity.

About Michelle: Michelle is a Wiyot filmmaker and photographer who grew up on the Table Bluff Reservation. She received her Masters in film and Electronic Media at American University and her B.A. at Humboldt State in both Film and Native American Studies. Many of her works focus on the importance of culture, traditions and identity.

About “Douk”: A Native American family confronts the harsh reality of being split apart from their daughters.

Watch the NFMLA interview with Michelle Courtney, director of “Douk”:

“Hung Up,” directed by Damon O’Steen and produced by Melissa Jackson

About Damon: A graduate from the Art Center College of Design in Pasadena, Damon, as Texan filmmaker, has directed three feature films, including the award-winning apocalyptic thriller Deadland (2009).

About Melissa: From Italian Vogue to Target, Melissa’s days of modeling led her to pursue an acting career and find the Marilyn Violet Foundation, which works to improve the lives of children in Manhattan, Brooklyn, and Detroit.

Watch the NFMLA interview with Damon O’Steen and Melissa Jackson, director and producer of “Hung Up”:

About “Blackwater”: A miniseries pilot that follows the story of Birdie Blackwater, a washed-up Native American country singer from the reservation who found stardom and fame at an early age.

Watch the NFMLA interview with Boise Esquerra, director of “Blackwater”:

About Tyler: Growing in the San Fernando valley, Tyler became obsessed with storytelling very early. He went to NYU’s Tisch School of the Arts, and landed an assistant job at Warner Bros after graduation. After working his way up to becoming a story editor, he left the studio to take an opportunity with Terrence Malick in Austin.

About Blinders: In the wake of a messy break-up, Andy Escobedo decides to start fresh, relocating from Austin to Los Angeles. Eager to make new connections, he befriends Roger, an unusual rideshare driver. But when Roger’ behavior gets too strange for comfort, Andy blows him off, choosing to focus on a budding relationship with Sam. This unhinges Roger, who begins to torment Andy, ensuring that his stay in L.A. is short-lived.

Watch the NFMLA interview with Tyler Savage, director of Blinders:

About Koji: Born and raised in Japan, Koji moved to Los Angeles at the age of 18 and studied filmmaking at California State University, Long Beach. After living in California for seven years, Koji moved back to Japan and started his own production company, Coast Vision Productions.

About “Makhaliss”: A cold-hearted reaper, Makhaliss does not hesitate to take the lives of humans because of her grudge against them. She believes they are all better off dead because death brings peace to their spirits. One day she meets a dying 17 year-old girl, Satsuki, who suffers from the guilt of leaving her single mother behind.

Watch the NFMLA interview with Koji Yamamoto, director of “Makhaliss”:

“Natives,” directed by Ramone Farrier and produced by Lucas Ford

About Ramone: Ramone Farrier is a filmmaker and photographer currently residing in Los Angeles. Ramone holds an MFA from the Peter Stark Producing Program at the University of Southern California. Ramone recently worked as a post production assistant on Jordan Peele and J.J. Abrams’s HBO show Lovecraft Country. “Natives” is Ramone’s directorial debut.

About Lucas: Lucas Ford is an award-winning Canadian film and television producer. His produced work has screened at more than 50 film festivals worldwide, including Telefilm Canada’s Showcase at Cannes 2019. Lucas holds an MFA from the Peter Stark Producing Program at USC, and is a voting member of the Academy of Canadian Cinema and Television. He resides in Los Angeles.

About “Natives”: “Natives” follows two cousins, Canuto and Stomps, from an East L.A. neighborhood under siege by gangs and gentrification. Both young men grew up with pride in their community and are grappling with the question of leadership. The story focuses on the divergence of their paths and their ultimate clash.

Watch the NFMLA interview with Ramone Farrier and Lucas Ford, director and producer of “Natives”:

Baby Money Is a High-Stakes Home-Invasion Thriller, Full of Lessons for Scrappy Filmmakers
In Dashcam, a Trump Troll Is Tormented by Anarchy in the U.K.