NFMLA Celebrates Lebanese, Arab and Dutch Cinema in Partnership with The Academy of Motion Picture Arts and Sciences 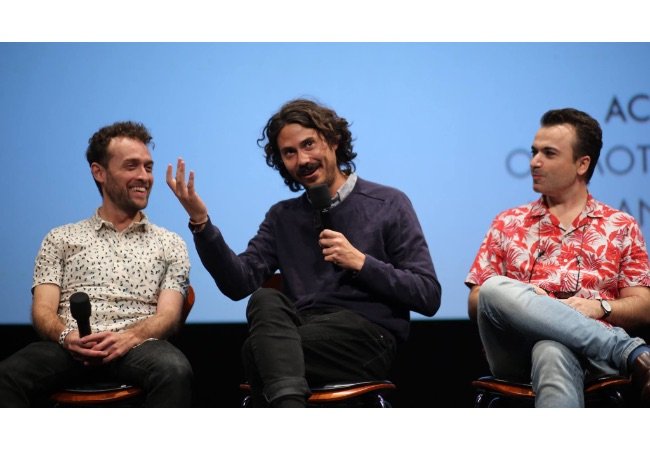 A journey into the mind of an autistic protagonist navigating the world, a trip down memory lane, a take on the life of Syrian refugees and two young Palestinians trying to record music in a noisy refugee camp are among the narratives told at NFMLA’s December 14th, 2019 Film Festival in partnership with The Academy of Motion Picture Arts and Sciences.

Co-presented by the Arab Film and Media Institute (AFMI) and the Dutch Culture USA (Consulate General of the Kingdom of the Netherlands in New York), the Festival line-up showcased some of the most promising Lebanese, Arab and Dutch voices from around the globe.

The festival kicked off with InFocus: Dutch Cinema, a collection of new and exciting work from Dutch short film directors. The program, curated in partnership with EYE International, offered many keen studies of the human condition, society, the complexities of intimate relationships, and of death. The program concluded with InFocus: Arab Cinema which showcased a strong line-up of Lebanese, Syrian, Egyptian, Palestinian, Saudi Arabian, and Tunisian stories told through dark humor, modern interpretations of folklore, and unflinching naturalitic lenses. NFMLA showcases films by filmmakers of all backgrounds throughout the year in addition to its special InFocus programming which celebrates diversity, inclusion and region. All filmmakers are welcome and encouraged to submit their projects which will be considered for all upcoming NFMLA Festivals, regardless of the InFocus programming.

Here are the films:

About Zeina: Zeina Nassereddine is a Lebanese, Canadian, and American actress, active within the Arab Art Community of Dearborn, Michigan.

About Cycle of Apples: In this fairytale gone wrong, Snow White forms a friendship with a talking ram, but fearing that death will keep them apart, she seeks the apple of eternal life to avoid their inevitable separation.

Watch the NFMLA interview with actress Zeina Nasseredine from “Cycle of Apples”:

About Finn: As a filmmaker, Finn Szumlas strives to create art that expresses a sense of wonder in the face of seemingly meaningless human experiences.

About Viewing: In the week between a former model’s suicide, we witness the ways in which the people around her contemplate her lifeless body.

Watch the NFMLA interview with Finn Szumlas, director of Viewing:

About Raed: Raed Alsemari is a Saudi Arabian filmmaker pursuing an MFA in Filmmaking at NYU’s Tisch School of the Arts after completing a BA in History and Literature at Harvard University.

About Dunya’s Day: Dunya’s perfectly planned graduation party is headed for disaster after she finds herself abandoned by her household help.

“Son of a Dancer” directed by Georges Hazim

About Georges: Lebanese director Georges Hazim sees cinema as the ultimate weapon, a tool needed to progress society and someday achieve the freedom to exist without fear.

About Son of a Dancer: When Majed discovers that his late mother used to be a belly dancer, a new connection into his family’s past exposes uncharted possibilities.

Watch the NFMLA interview with Georges Hazim, director of Son of a Dancer:

About “Mind My Mind”: While relying on social scripts to survive the social world, it’s not easy to go off-script — especially if you’re obsessed with German dive bombers and just want to date a girl.

Watch the NFMLA interview with Floor Adams, director of Mind My Mind:

About Firas: Firas is a freelance filmmaker, currently organizing a moving image exhibition, for a German NGO, on the topic of displaced Syrian children refugees.

About Sugarcoat: Festivities at Souha’s household take a drastic turn as she finds herself torn between her holiday guests and her teenage daughter.

Watch the NFMLA interview with Firas Itani, director of “Sugarcoat”:

About Wisam: Wisam Al Jafari is a filmmaker born in Dheisheh Refugee Camp near Bethlehem, and now specializing in short fiction and experimental films that tell his stories.

About “Ambience”: Despite the noise and chaos of the refugee camp, two young Palestinian refugees discover a creative way to record music in order to meet a competition deadline.

NFMLA Celebrates Global Documentary Cinema
Once Upon a Time… in Chinatown: Exclusive Excerpt From Sam Wasson’s The Big Goodbye