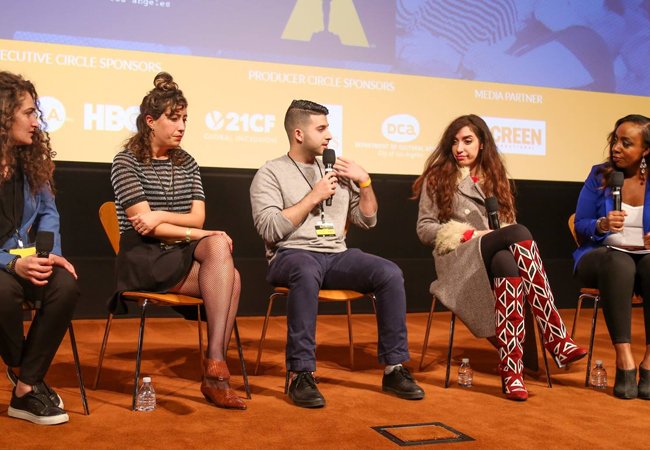 The stories of a missing marathoner, immigrant musicians trying to set a world record, two boys working in a gold mine, a storyteller’s return home, a gay liberation activist and the prisoners of the world were among the highlights of the NFMLA Film Festival’s annual documentary presentation, DocuSlate.

The Dec. 7 line-up showcased six programs which included five feature documentaries and seven short documentaries. The curation was a journey around the globe, featuring stories from Kenya to Canada. Filmmakers shared thought-provoking documentaries that told universal stories of families coping with breast cancer, drew parallels between genocides continents apart, took us behind the scenes of human interest stories that captured the evening news, and so much more.

NFMLA showcases films by filmmakers of all backgrounds throughout the year, in addition to its special InFocus programming which celebrates diversity, inclusion and region. All filmmakers are welcome and encouraged to submit their projects which will be considered for all upcoming NFMLA Festivals, regardless of the programming.

About Bex: Bex is a documentary director and photographer, passionate about exploring and representing individual stories and emotional journeys and examining what they reveal about how we live.

Watch the NFMLA interview with Bex Singleton, director of The Cowfoot Prince:

“Thanks To Hank,” directed by Bob Ostertag

Watch the NFMLA interview with Bob Ostertag, director of “Thanks to Hank”:

About “Indians”: “Indians” delves into the politics of hate and discrimination through analyzing two shockingly similar periods of mass genocide.

Watch the NFMLA interview with Nadeer Hashmi, director of “Indians”:

“Vanished at the Finish,” directed by Jason Cooper

About Jason: Jason Cooper is a producer and director whose projects reflect his passion for non-fiction storytelling and innovation within the branded content space.

Watch the NFMLA interview with Jason Cooper, director of “Vanished at the Finish”:

“This Is My Home,” directed by Karl Nickoley

About Karl: Karl Nickoley “This is My Home” is perhaps his most ambitious project to date, showcasing his ability to balance creativity and pragmatism with ease.

About “This Is My Home”: Two Irish immigrant musicians embark on a quest to set a World Record playing 60 shows in all 50 states in just 35 days  – what could go wrong?

Watch the NFMLA interview with Karl Nickoley, director of “This Is My Home”:

About Gina: Gina Leibrecht’s career began in 1998 in collaboration with the late documentary filmmaker, and pioneer of the form, Les Blank, with whom she developed a passion for producing, directing and editing feature documentaries.

About Cassandra: Cassandra Jabola’s strengths as a filmmaker lie in capturing meaningful interactions and crafting stories that inspire human connection.

Watch the NFMLA interview with Gina Leibrecht and Cassandra Jabola, directors of “Ai Weiwei: Yours Truly”:

About Stuart: Stuart Harmon is an award-winning filmmaker based in New York City, known for producing content for The New York Times, Vice, CNN, and A&E in countries all around the world.

Watch the NFMLA interview with Stuart Harmon, director of The Money Stone:

In Parasite, Who Should You Root For? (Podcast)
NFMLA Celebrates Lebanese, Arab and Dutch Cinema in Partnership with The Academy of Motion Picture Arts and Sciences