NFMLA Celebrates Black Cinema With Stories of a Father and Son, and a Daughters’s Hard Questions 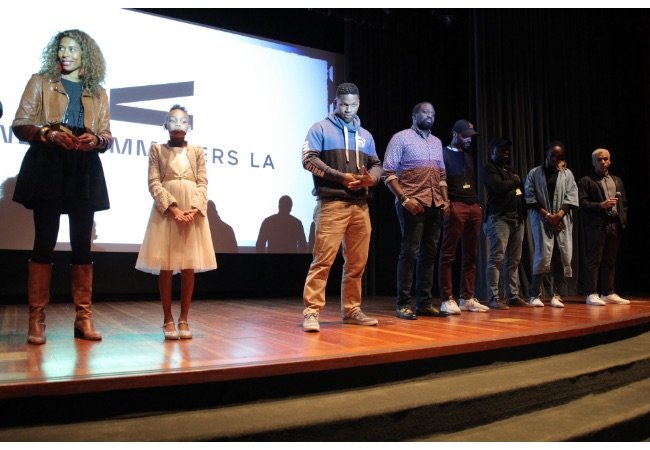 A falling rock changing a man’s life, a bored house cat transforming into a human, and a daughter asking profound questions about slavery were just some of the stories told at NFMLA’s February festival with an emphasis on celebrating emerging Black filmmakers and narratives with its community collaborator, the African Artists’ Association.

The Feb. 8 event kicked off with a shorts program that included stories about an overworked paramedic making the decision of her life, a father and son redefining their relationship, and a refugee navigating a new life in New Zealand.

The night continued with the Los Angeles premiere of Shedding, director Jake Thomas’s feature debut and absurdist exploration of the world through the eyes of a house cat who transforms into a human and helps a family grieve a loss.

It concluded with the shorts program InFocus: Black Cinema, which features stories about love, violence, the way that history impacts narratives — and the things passed on between generations.

Here are the films and filmmakers highlighted.

About James: James Grisom joined the production team for the documentary Still I Rise in 2013 as the composer, editor, artist and creative partner, and ever since Grisom has chased his dream of crafting his own stories to share with the world

About “Bobby”: Ideals of manhood clash when a young man’s ambition diverges from his dad’s dreams for his future.

Watch the NFMLA interview with James Grisom, director of “Bobby”:

About Jason: As an avid lover of comedy and interesting stories, Jason prods for nuanced narratives and looks for ways to make the audience laugh, feel, and be educated simultaneously.

About “Steve”: If grinding in the bustling streets of NYC isn’t enough for a Broadway actress, an uninvited “guest” in her apartment might be just the thing to put her over the edge.

Watch the NFMLA interview with Jason Hightower, director of Steve:

About Djaka Souare: Of African and French descent, Djaka Souare is an actress who started her career in theater before transitioning to film and TV.

About Ahmed Barbary: Born in Cairo, Egypt, Barbary studied computer sciences before pivoting to his passion, film, and spent five years working as a post production supervisor between Dubai and the U.S.

About “Jazz in Wakanda”: An otherwise uneventful day for Julie takes a more serious turn when her daughter, Jazz, starts to ask profound questions about slavery, and what she’s learned at school.

Watch the NFMLA interview with Djaka Souare, director of “Jazz in Wakanda”:

About Jake: Jake Thomas’s previous credits include One on One, a top five finalist for the Warner Bros. Employee Film Showcase, winner of Best Drama at the Metropolis Fan Film Competition, nominee for Best Short at the Burbank International Film Festival, and selection for the Attic Showcase during the SXSW Film Festival.

About Shedding: A bored house cat who wishes to escape his life mysteriously transforms into a human and helps a broken family heal from their emotional wounds.

Watch the NFMLA interview with Jake Thomas, director of “Shedding”:

About Jared: Jared moved from a small town in Virginia to NYC when ambitions of film school were dampened and he finally started making short films on his own time, each one different than the last.

“Where the Dahlias Grow” directed by Jayden Gillespie

About “Where the Dahlias Grow”: A young black and Latina couple living in South Central Los Angeles maneuvers through their relationship, while battling cultural dissimilarities, and their racially prejudiced families.

Watch the NFMLA interview with Jayden Gillespie, director of “Where the Dahlias Grow”:

“Walk Off” directed by Andrew Howell

About Andrew: Andrew Howell is a writer/director from Ypsilanti Michigan, who works primarily in dramatic narrative and makes shorts that often deal with familial conflicts.

About “Walk Off”: With graduation nearing, and no offers to play in college, a high school baseball star and his sports-crazed father are forced to figure out what their relationship consists of without baseball.

Watch the NFMLA interview with Andrew Howell, director of “Walk Off”:

About Robyn: Robyn Paterson gained attention in 2012 with her first feature documentary, Finding Mercy, about her search for a missing friend in her homeland of Zimbabwe.

About “Run Rabbit”: Having lost almost everything he has known, a young refugee must pave a future in a provincial New Zealand town.

“From the Clear Blue Sky” directed by James Bachelor

About James: James has been making films since he was old enough to pick up a VHS camera. He’s directed several shorts including “Eli Over Darkness” as well as a micro-budget feature film, “Dungeons & Derrick,” and co-wrote the “Uncanny Annie” episode of Hulu’s “Into the Dark” series.

About “From the Clear Blue Sky”: One man’s life is forever changed by a rock falling at terminal velocity.

Watch the NFMLA interview with James Bachelor, director of From the Clear Blue Sky: