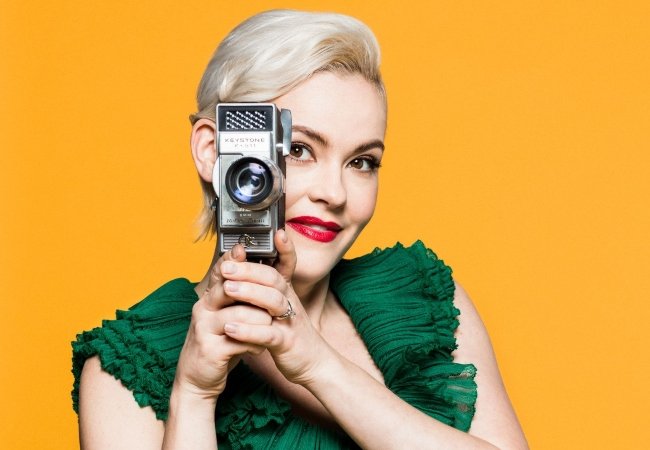 Kimmy Gatewood had a blast directing Good on Paper, Netflix’s rom-com-thriller hybrid starring and written by Iliza Shlesinger about a stand-up comedian who slowly begins to suspect whether her nice-guy new boyfriend, Dennis, might actually be lying about every part of his life.

But “director” is far from the only label that could be used to describe Gatewood. She’s also an actress herself, known for Glow, Atypical, and American Dad, among others. She’s a writer, too — her script for the comedy film Girlworld sold to Amazon last year and currently has Ben Stiller and Nicholas Weinstock’s Red Hour Films attached to produce.

Her dark comedy short film “Navel Gazers,” which she wrote, directed, produced, and starred in, won Outstanding Sci-fi at the 2021 Micheaux Film Festival. She’s also directed episodes of Girls 5eva, Timeline, and Crazy Ex-Girlfriend, (the last of which she also acted in), and her producing credits include Not Safe With Nikki Glaser and the Eko original series Timeline.

Oh, and she also knows how to run sound in a pinch.

You could say she’s a Rennaissance woman.

On Good on Paper, she hit it off with Shlesinger, a fellow comedian, right when she read the script — and she was very entertained by the fact that the character of Dennis, played by Ryan Hansen, is actually based on a real person that Shlesinger dated.

“I am a huge fan of television based on a true story, and I love any kind of personal story,” Gatewood said. “It’s based on a real, true story that happened to her.”

But don’t be alarmed — not all of it is true. (At least not the criminal parts, in which Margaret Cho plays a combination of several of Shlesinger’s real friends.)

“The first half of the film to basically when they kidnap him is all true, and then it becomes kind of a revenge fantasy from there,” Gatewood said.

But besides acting out a revenge fantasy, Good on Paper is proof of how far a great script and great actors can get you, even on a shoestring budget.

“The thing that I took away from it was the incredible community that I have built for the past 20 years of comedians, filmmakers, actors,” she said. “I leaned hard on my community. They all showed up, they all wanted to do this with me. And we had a small budget.”

She added, laughing, “In fact, Paris Pickard, who is our production designer — that set of Margot’s basement where they kidnapped him? We ran out of money for anything, so she all that stuff is just from her basement.”

One of the things that makes Good on Paper stand out is Shlesinger’s stand-up comedy act chopped up and woven throughout the story in lieu of voiceover narration. That was Gatewood’s idea.

“Everything was written for the Andrea Singer character,” she said. “When I got the script, there wasn’t the stand-up element, and so there was a voiceover, and I thought, why not take what Iliza is incredible at and put it, like, make it a part of this character?”

“Thematically, it works so well because she’s a stand-up, because she’s struggling — it’s the thing that put her on the road and kind of disconnected her from her friends,” she added. “But then it becomes this place where it becomes where her power comes from. It has empowered her. She uses the stage to tell her story.”

Also Read: How The Girlfriend Experience Used Deepfake Technology for Its Season 3 Finale

Good on Paper is stacked with talent — not just with Gatewood, Shlesinger, Cho, Hansen, and Rebecca Rittenhouse, who plays Andrea’s arch-nemesis — but also with a sneaky little cameo by The Bachelorette star Tyler Cameron, whose role is literally credited on IMDb as “Ruggedly Handsome Man.”

But Cameron isn’t the only professionally beautiful person who appears in the film — Victoria’s Secret model Taylor Hill also makes an appearance as Chanterelle, a caddy girl who works at the golf course where Dennis pretends to sprain his back in order to avoid being caught in lies about going to Yale, and knowing how to play golf.

Gatewood says working with someone like Shlesinger, with whom she shares so much in common, made her job as a director that much easier.

“I’m also a writer-performer, just coming from live comedy and, obviously being a stand-up, you inherently are a writer-performer,” she said. “I love it, because they’re so connected to the material, and you can ask questions about what really happened — ‘What did you really feel?’ — and capture that on screen. In addition, you know, there were times when a scene just, we put it in the space, we put it up on its feet, and it just wasn’t flowing. So I could just say, ‘Hey, Iliza, let’s see what we can cut here.'”

It also didn’t hurt that Shlesinger could channel her memories of the events that inspired Good on Paper.

“She can also answer questions about the real guy for Ryan Hansen, who plays Dennis,” she said. “I find, as an actor myself, when you can kind of bounce off of something as inspiration, it’s nice to have that little thing to grasp on to because you can feel bold. You can make bold choices.”