Narcotic Harmony: An American provocateur wages a war against the senses with Spring Breakers
by Josh Ralske 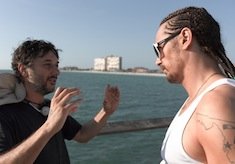 I was never really a fan of Harmony Korine’s work. I saw Kids (directed by Larry Clark) and Gummo, and parts of Julien Donkey-Boy and Trash Humpers, and I felt as though a malevolent spirit informed his oeuvre. His work made me uncomfortable, but I also sensed he’d be just fine with that.

Spring Breakers, Korine’s latest, offers the spectacle of Disney princesses Selena Gomez and Vanessa Hudgens, and “Pretty Little Liars” star Ashley Benson—along with Korine’s wife, Rachel Korine—playing bad-girl college students who rob a fast food restaurant in order to finance a debauched escapade in St. Petersburg, Florida. Eventually, the girls come under the sway of a deranged Riff Raff-style rapper/drug kingpin, played by a dreadlocked, gold-grilled James Franco (who is nothing short of brilliant). The sense that the lead actresses might not fully understand Korine’s project pervades the work—supported in no small part by Hudgens’ comments at the film’s press conference in Toronto, where she said she hoped young women would feel “empowered” by the film. I can’t explain how wrong-headed that is. You may be able to tell from the trailer.

But Spring Breakers forced me to reassess my view of Korine as an artist. The film is at once asinine and wholly mesmerizing. It’s crazy, and conceivably mean-spirited, but it’s also exquisitely assembled and gorgeous. It masquerades as a conventionally plotted, mainstream Hollywood-style bacchanal featuring young women in various states of undress, guns, drugs, and pop music; it’s also unmistakably a Harmony Korine film. I went from shaking my head at the director’s jaded take on the banality of contemporary youth culture, to literally gasping in awe at the images on the screen. At that press conference in Toronto, Korine mentioned wanting the movie to look like it was “shot through a bag of Skittles,” and that is hilariously apt. Spring Breakers is a delirious, candy-colored nightmare that at times left me feeling like I was stoned out of my mind watching it.

One of the benefits of being in the hands of a moviemaker who doesn’t seem to give a shit about conventional narrative is that I was never quite sure where the film was going. Also, Spring Breakers made me want to listen to Skrillex, which I wouldn’t have previously thought possible.

I spoke to Korine the week before the film premiered.

MovieMaker (MM): The movie has a narcotic feeling to it. Could you talk a little about how consciously you designed it to have that effect?

MM: Your films usually portray subcultures, but here you’re looking at mainstream American culture, and showing a different side than we usually see.

HK: I liked the idea of spring break. I felt like I understood that world a little bit. I had been collecting imagery for a while, and there was something exciting about taking this  familiar, base, iconic American institution—kids going crazy on the beach in spring—and finding some kind of strange, coded language or poetry inside of it.

MM: When you were developing the film were you thinking of casting these well-known actors?

HK: I was thinking about who could play these characters as I was writing it—who could be the best. For me the ultimate was the girls I cast, because in some ways they’re representative of the American pop ideology/mythology. More importantly, I liked that everything they’ve done in the past was the complete opposite of this. I thought it would be interesting to play against everyone’s expectations of them. To my surprise, they were down.

MM: Was it a challenge convincing them to do the film?

HK: I don’t really try to convince anybody to do anything. I’ve been making movies for a while, so they were familiar with my films—or else I told them to get familiar with them. They were aware that I wanted to do something more graphic and more extreme, the type of film they hadn’t done yet. Rather than having to be convinced, they were actually excited by the prospect of the challenge.

MM: In making the film, my sense is you gave the actors a lot of freedom to explore. You put them in the situation, and let things develop from there.

HK: Kind of a mixture of the two. I had the script, but I only wrote the script up to a point. I always keep it pretty loose, and work through a lot of things in rehearsal. Then while shooting, everything shifts and changes because of the locations and the world, and we allow ourselves to react to those circumstances during production. I’m constantly revising the film, and the film is shifting in tone, and the way the performers are playing the scenes changes. I try to keep the process as organic and random and wild as possible.

MM: How long did you spend getting a feel for St. Petersburg?

HK: I’m always interested in places that haven’t been shot before. Generally, I spend a couple of months alone in the location. I just drive around in the car and get lost and find places, to soak up the feeling of the setting. That’s always one of the most important things for me. I feel, in a lot of ways, the majority of the movie is done before the camera rolls. The real filmmaking is in the prep. It’s the details.

MM: Can you talk about the music? How did you decide to use Skrillex?

HK: The movie is about a kind of restlessness, a kind of frantic bombardment of images and sounds. That’s what Skrillex’s music is. It’s energy-driven, and it’s bombastic and beautiful at the same time. I thought it was perfect for the film, and I liked that he’s part of the “spring break” culture, that his music is a part of that world. And I thought his aesthetic would work with [the sound designer] Cliff Martinez’s, that their styles would complement each other. Between the sound design—which is very musical—and the actual score, the film is pretty much one continuous piece of music.

MM: Do you think in terms of a career trajectory? Spring Breakers has the potential to reach a wider audience than, say, Trash Humpers. Were you conscious of that while making this film?

HK: I don’t think in terms of careerism or popularity. I start off with characters and stories, always, and just react to what comes. There’s a specific type of movie I’ve been trying to make my whole life, so usually I’m responding to a story or an image in some way where I feel a deep connection to the subject. I don’t really second guess that impulse. With this film, I liked the idea of following these characters in this world. At the same time, it was also exciting for me to have, potentially, a completely different audience watch this movie.

I think of my work as one large, unified body. I always want my movies to be seen by as many people as possible, but I’ve always written and directed my films in a certain way that isn’t appealing to everyone. I can’t see myself just doing, like, studio schlock. I wouldn’t even know how to approach it.

MM: That’s the amazing thing about this film to me: It is such a sort of mainstream, straightforward traditional narrative, but it’s definitely of a piece with your other work—especially in terms of the use of music and the sound design, and the way you loop the dialogue, which adds to the sort of narcotic effect, that sort of buzz you get from the film. A lot of that is achieved through the editing. I’m wondering, when you finish shooting the film, how close you were to knowing what it was going to be.

HK: A lot comes from the editing, as well as from the shooting, of course. Even though there’s a strong trajectory, and the story’s being propelled in a very linear way, around the edges, on the periphery, the narrative is liquid. I think of it as something closer to music. I’m after a kind of energy more than anything that’s cemented in logic or traditional structure. I’m trying to achieve something more like a feeling. So, when I’m cutting the film and putting it together and experimenting, it speaks to me—rather than the other way around. I end up discovering the film as I go along. As it develops, I start to feel, okay, this is what the film is going to be, this is what it needs to be, this is how it’s going to shift. The creation, in many ways, is an intuitive, responsive game.

MM: By showing the underside of pop culture, the film feels particularly subversive. Is that something you were consciously trying to achieve?

HK: I don’t know. It’s hard for me, now, to even think in terms of “mainstream” culture, because I don’t even know what “mainstream” is anymore. Or “underground” culture, for that matter. The Internet has ironed out the disparities. Basically, because of the way people communicate now, there’s no real “underground,” and there’s no “above-ground.” Either things are interesting or not interesting. Spring Breakers, I guess, is kind of my filtering of the zeitgeist, and the result is an impressionistic translation of all the various aspects of the culture. Perhaps in a lot of ways the film does subvert things that seem base and normal and without merit, and makes them seem more relevant. That was, I think, something I consciously wanted to accomplish.

MM: There’s a sense in which this is a very serious film. It has a very lightweight, pop surface, but I was wondering if you were trying to make some kind of statement about drug culture or race relations?

HK: That commentary is definitely in there. The film is a mash-up of a lot of ideas—about race, violence, religion—and the result is sort of a mixture of profundity and retardation. Culturally, that’s where I think we are, and definitely I think that’s where I am. [laughs] You know what I mean?

MM: I’ve seen so many movies, but I’ve never had an experience quite like this, in terms of my own reaction to where the film went, as opposed to where I thought it was going. It was a really amazing experience, actually.

HK: That means a lot to me. That’s what I’m trying to go for, what I’m working for. That’s the best type of reaction I could hope to get.

MM: I can’t imagine a Harmony Korine fan being disappointed by this film, but I think many other people are going to connect with it.

HK: I’ve been wanting to do that for a long time, to have that type of reaction, so that would be terrific.

Photos courtesy of A24.

Spring Breakers is playing on more than 1,000 screens across the U.S., and stirring up vats of criticism.