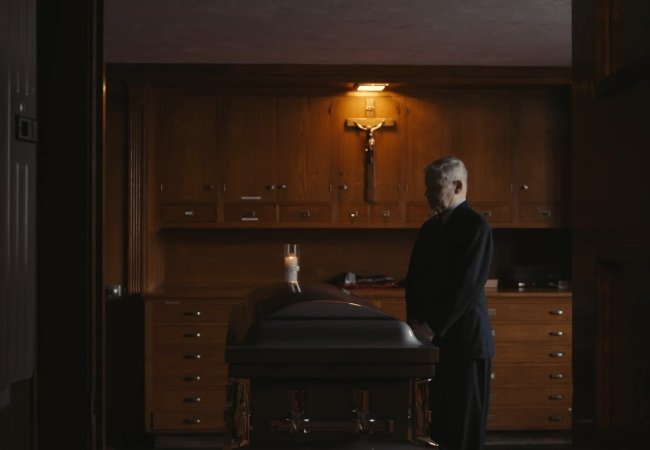 My Name Is Bulger sheds light on an often forgotten side of the Whitey Bulger story — his family. Though the late Bostonian has been inducted alongside the likes of Al Capone into the pantheon of the biggest, baddest American gangsters of all time, the truth about his life and legacy, according to the people who knew him best, is a much less dazzling and altogether more melancholy tale.

Out Thursday on Discovery+ and directed by Brendan J. Byrne, My Name Is Bulger presents the man from Southie in a much more human light — and through the eyes of his closest friends and family members, many of whom still hold a grudge against news outlets they accuse of printing what they considered unfair and salacious coverage of Whitey Bulger as he rose to infamy.

Bulger was played by Johnny Depp in the 2015 film Black Mass, and helped inspired Jack Nicholson’s character in The Departed. The doc zeroes in on the effects that Whitey’s reputation had on his relatives — specifically his brother, former Massachusetts Senate President William “Bill” Bulger. This might be old-hat for people from Massachusetts, but for those who don’t know, Bill Bulger’s tenure from 1978 to 1996 was the longest in Massachusetts history.

But in 2003, then-Massachusetts Gov. Mitt Romney called on him to resign from his post as head of the University of Massachusetts system after he admitted that he had talked to Whitey Bulger while Whitey was on the run from the law in 1995, according to The Boston Globe.

“I think Bill’s very clever. And I think he also is resigned, and genuinely, generally speaking, kind of believes that… he had a good life, he had a successful career,” Byrne said of William Bulger, now 87 years old and happily retired. “He was taken down by political opponents who felt it was expedient to use what his brother did to cut him down. He’s philosophical about all of that, because he knows and he has confidence in his own heart of hearts that he’s a good guy who did well.”

But that doesn’t stop the people who love him from arguing that he was treated unfairly in politics because of his brother’s criminal history.

“He probably knows that there are others who would be more motivated to be less happy with that situation, like his children and like some of his other more well-known political friends who can kind of maybe say things that he may feel deep, deep, deep, deep, deep, deep, down, but that he himself decides to keep a very dignified presence on.”

After so many years of shouldering the weight of Whitey’s public scrutiny, the Bulger family was understandably hesitant to participate in Byrne’s documentary, but were comforted by his shared Irish heritage and lack of interest in salacious details.

Also Read: Dirty Secrets of Stunt Work — a Job With a 100% Injury Rate

“Over a period of some time we built up a level of trust whereby they felt comfortable and confident that they could trust us with telling their story,” Byrne said. “But I have to say, actually, for a long time, it remained — and still to this day — there’s still a bit of reticence because of their kind of treatment at the hands of the media that they never ever get a fair crack of the whip… they’re nervous about this film coming out, but they were very nervous about actually taking the plunge and actually doing it.

“These are hugely sensitive issues. They’re things which divide opinion, and so I understand that,” he added. “I was able to say, ‘Look guys, there’s nothing there for me. Why would I get on a plane and fly 3,000 miles to talk to you guys just to tell another sensationalist kind of Whitey Bulger cardboard cutout, black-and-white, painting-by-numbers documentary? No, I’m not into that. Why would I waste my time? Why would I risk the ocean for that?'”

James “Whitey” Bulger was captured in Santa Monica, California in 2013 after 16 years on the run, and was beaten to death in prison in 2018. He was serving two life sentences for 11 murders. He was 89.

Byrne also spoke to Whitey Bulger’s longtime girlfriend, Catherine Greig, for the docuseries after she was released from prison.

“She’s still untrustworthy of most people. She was still fearful that, in some ways, whatever she might say could be used against her,” he said.

Greig was sentenced to eight years in prison for harboring Bulger for 16 years — one of the longest ever sentences given for harboring a criminal, U.S. Attorney for the District of Massachusetts, Carmen M. Ortiz said in 2012. Greig was also sentenced to an additional 21 months for refusing to testify about whether they received help from others while they were on the lam, according to the Globe.

In My Name Is Bulger, Greig says she believes that she was treated unfairly by the U.S. justice system because of deep dislike for Whitey. She lived with him for years while he was hiding out in Santa Monica.

“She was motivated to try and share a different story, or a story of Whitey that, obviously, only she could understand… given that she had spent more time with them than any other human being in the world,” Byrne said.

The doc about a year into production when Whitey Bulger was killed. Byrne said he flew to Boston to be with the family the day after his death.

Though Byrne had held out hope that he might be bale to convince Whitey to be interviewed for the project, the chance never came.

If he had been able to speak to Whitey himself, Byrne says My Name Is Bulger may have turned into a completely different documentary. As it is now, it’s refreshingly focused less on Whitey himself and more on the people that loved him.

However, there are still some things Byrne would have liked to ask. Of course, the obligatory question: Does he regret the murders? And then, the more nuanced questions: Did his time at Alcatraz, decades ago, have a lasting impact on his life? Did he ever consider giving up his life of crime for the sake of his family? What motivated him to become the individual that he did?

We’ll never hear the answers from Bulger himself. But My Name Is Bulger paints a broader picture of where he came from. Byrne hopes the film softens the public’s view on the whole Bulger family — most of all, Bill.

“If it opens them up and makes them realize he was a very different character altogether and he should be judged on his own merits rather than the deeds of his brother,” he said, “then it will have achieved something.”

My Name Is Bulger is now on Discovery+. Main Image: William Bulger next to his brother James “Whitey” Bulger’s casket, courtesy of Discovery+.