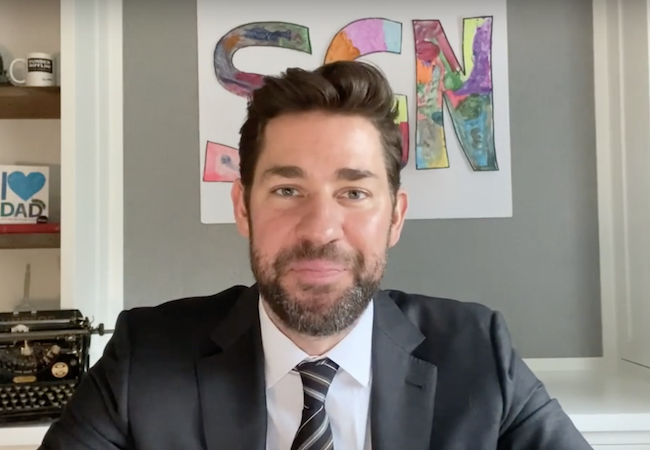 In Movie News today: Tiger King updates; John Krasinski delivers Some Good News; who’s winning at the home box office; and how you can support your local theater while watching a Cannes winner. Plus: Drive-ins are back.

Congratulations, 1917: Streaming video charts are the new box office returns, not that box offices are closed. The most popular streaming video on Apple is 1917, which everyone really should have seen in a theater. It’s the top film on iTunes this week. But what about all those new releases rushed to $19.99 premium video on demand when COVID-19 closed theaters? Onward leads on Apple, while Bloodshot leads on Amazon Prime. IndieWire has a very good, very detailed list, which also includes some necessary caveats.

Tiger King: Where Are They Now?: Of course, it’s hard for any movie to compete when Tiger King also exists. It’s Game of Thrones with cats, but real, and it’s hopelessly addictive. Variety has saved you some Googling by compiling a rundown of where all those people are now.

John Krasinski Beats the Odds: The director of A Quiet Place has managed to do something that seemed impossible in the early days of the coronavirus: He’s made a celebrity video that is neither tone-deaf nor infuriating. Plus Steve Carell pops in to reminisce about The Office. Watch Some Good News with John Krasinski and be cheered:

Support Local Theaters: Kino Lorber’s terrific Kino Marquee program has bloomed from a dozen theaters to 150. In the program, you pay $12 to watch last year’s Cannes Grand Jury Prize winner, the Sônia Braga film Bacurau, on your local arthouse theater’s website. (You’ll receive a link to an online screening room.) Your local theater will receive a cut of the money, and as an added bonus, will still exist when all this is over. BoxOfficePro notes that on Wednesday, there will be a virtual Q&A with the Bacurau filmmakers and cast.

Hollywood Ponies Up: Deadline says Los Angeles Mayor Eric Garcetti announced $500,000 donations to fight COVID-19 from Bob Iger, Jeffrey Katzenberg, and Steven Spielberg, among others, Deadline reported. James McAvoy, meanwhile, donated £275,000 to a UK effort to get medical professionals the protective equipment they need. Fun way to keep your math skills sharp: If one British pound (£) is worth 1.24 U.S. dollars, how much did James McAvoy give? Deadline has the answer.

Drive-in Revivin’: The New York Times notes that drive-in theaters — while of course  taking proper social distancing measures — have enjoyed a resurgence lately. Hey, some of us would go every weekend if drive-ins became a thing again.

Unspool Together: Unspooled is a fabulous film podcast in which Amy Nicholson and Paul Scheer discuss the greatest films of all time. Tonight at 8:30 PT, they livestream an episode all about Penny Marshall’s Big, starring America’s cool dad, Tom Hanks. It will stream here. You can listen to me talk about with Paul Scheer here (on Spotify) or here (on Apple Podcasts).

Join Paul and Amy for Unspooled's first YouTube live show this Monday, all about the Tom Hanks classic Big! pic.twitter.com/QR7qy3ows4