Woody Allen Published: Woody Allen’s book, Apropos of Nothing, has been published with no warning by Arcade Publishing after his previous publisher dumped the book, The Associated Press reports. In the book, Allen again denies ever sexually abusing his estranged daughter, Dylan Farrow, when she was a child: “I never laid a finger on Dylan, never did anything to her that could be even misconstrued as abusing her; it was a total fabrication from start to finish,” he writes. Look, we’re just grateful for any movie news unrelated to coronavirus.

Isolation: Harvey Weinstein has tested positive for the COVID-19 virus, the Niagara Gazette reports. And if you’re thinking, “The Niagara whatnow?,” it’s the local paper near Wende Correctional Facility in Western New York, where the paper said Weinstein is being isolated. Variety spoke to Weinstein reps who could not confirm the report. Here’s hoping he can return to the general prison population as soon as possible. 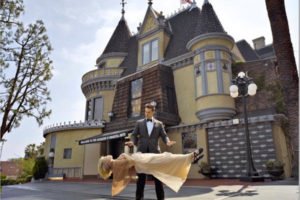 Secrets of the Magic Castle: We wrote a little something about Hollywood’s majestic, mysterious Magic Castle, a sleight-of-hand haven and the subject of an excellent new documentary. Yes, what you see to your left is a woman levitating, and yes, it is caused by spirits.

Lumière 125th Anniversary: IndieWire has a terrific piece noting that today is the 125th anniversary of Auguste and Louis Lumière debuting Workers Leaving the Lumière Factory, “a short film widely regarded as the invention of movies for mass audiences.” It was held at a private screening for 10 people. Whoa, 10 people? Social distancing, Lumières! But seriously, rough as things are right now, popular cinema looks pretty great for a 125-year-old.

Chinese Theaters Reopen: More than 500 theater screens have reopened in China amid hopes that the coronavirus outbreak is receding, Variety reports.

Disney Earnings Estimates Down: Doug Creutz, an analyst for the investment bank Cowen, has cut his earnings estimates for massive entertainment companies like Disney and CBSViacom in light of the worldwide health scare that has closed theme parks and movie theaters. The Hollywood Reporter has the specifics on this achingly predictable news.

The Magic Castle Opens Its Doors to Share Never-Before-Told Stories in New Doc
Is The Irishman’s Opening Scene a Goodfellas Callback?