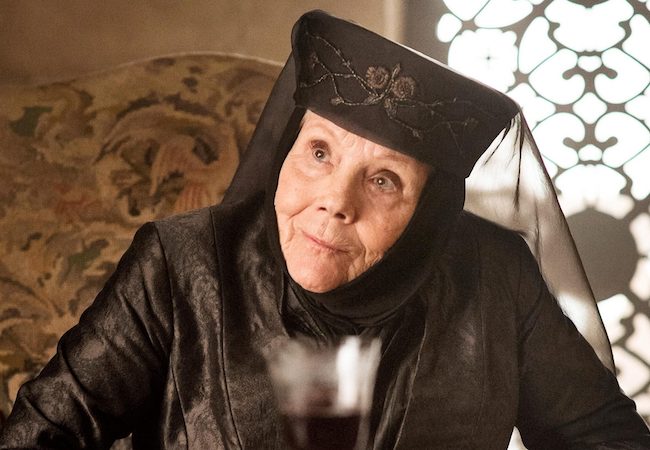 In today’s Movie News Rundown: Women continue to be outnumbered onscreen by more than two-to-one; R.I.P. to Diana Rigg, one of the real first Avengers, Halle Berry talks heartbreak and broken ribs; and will Wonder Woman be delayed again?

R.I.P. Diana Rigg: The actress who gained fame as Emma Peel in the TV series The Avengers and brought verve to every scene in which she appeared as Olenna Tyrell in Game of Thrones, a generation later, has died at 82. “She died peacefully early this morning,” her agent told the BBC. She was also known for playing Tracy, the only woman who ever married James Bond, in the 1969 film On Her Majesty’s Secret Service.

Will Tenet Delay Wonder Woman? IndieWire says the understandably so-so box office returns for Tenet may cause Warner Bros. to think twice about the current Oct. 2 release date for Wonder Woman 1984. The story also casts doubt on the Dune release date, now set for Dec. 18. The trailer released yesterday says “Only in Theaters” but doesn’t say when.

SAG-AFTRA Insurance: The union is offering significantly reduced COBRA premiums for eligible participants who will soon lose their coverage. Details are here.

Missing: A brand-new study from the USC Annenberg Inclusion Initiative found that only 34 percent of speaking roles in 1,300 popular films studied last year went to women or girls. “And those Best Picture Standards won’t help this problem,” the initiative tweeted today.

More on Those Standards: The Hollywood Reporter spoke with Academy of Motion Picture Arts and Sciences officials about their new, extremely basic new diversity standards. “The intention is to be aspirational and objective and to lead the industry toward a better version of itself,” said Paramount chief Jim Gianopulos, who worked on the new standards. As I noted yesterday, even a very white and male movie like Dunkirk (or 1917, or The Irishman) would have a very easy time meeting the new requirements as long as its studio had an inclusive internship program and its publicity team, for example, had some basic diversity. “Given the number of women and gay men who work in the field of publicity, that is an easy bar for any studio to clear,” said The New York Times.

Halle Berry’s Oscar: Talking to Variety about Bruised, her directorial debut — which will premiere at the Toronto International Film Festival this week — Berry expressed her heartbreak that no other Black woman has won Best Actress since she did for Monster’s Ball nearly 20 years ago. “I question, ‘Was that an important moment, or was it just an important moment for me?’ I wanted to believe it was so much bigger than me. It felt so much bigger than me, mainly because I knew others should have been there before me and they weren’t.”

No, Literally Bruised: Berry also describes to Variety how she cracked two ribs making Bruised, in which she plays an MMA fighter, after also breaking three ribs making John Wick 3.

Our Hearts Are With San Francisco: Thinking of our friends in the Bay Area, dealing with a red-tinged sky and terrible air quality because of the raging wildfires nearby. This video by Terry Tsai puts the moment in perspective by setting drone footage to the music of Blade Runner 2049, capturing the unsettling feel of a city that, even through all this, remains one of the most beautiful in the world.

Main image, above: Diana Rigg as Olenna Tyrell on Game of Thrones.

Movie News: Borat 2; Dune Trailer; Mulan Revisionism; Will New Oscars Diversity Rules Do Anything?
I Am Woman Honors Helen Reddy and Her Legacy of Feminist Activism