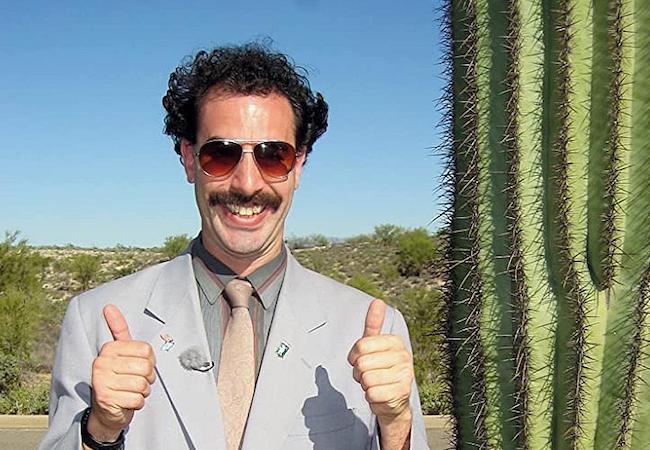 In today’s Movie News Rundown: Sacha Baron Cohen has reportedly made a secret Borat 2; a commentary on how Mulan gets Chinese history wrong; and could a movie like Dunkirk pass the Oscars new diversity standards? Plus: The Dune trailer is here.

Borat 2: Collider exclusively reports that Sacha Baron Cohen has secretly shot Borat 2 and shown it to a select number of people around Hollywood. Wait, you say: Isn’t Borat too recognizable to go around having awkward misunderstandings? That’s apparently part of the plot, according to Collider. Borat is now so well-known that he must go undercover, just as Cohen goes undercover as Borat. I’m very excited about this and so is may-uh wife.

Oscars Diversity: Effective at the 2025 Oscars ceremony, films will need to meet new diversity requirements in order to qualify for a Best Picture nomination. These standards, when you read them, are very easy to meet. In this piece, I looked at the case of Dunkirk, a film that quite reasonably has a very white, very male cast. (It’s based on an actual World War II evacuation of British soldiers and sailors battling Nazis.) it turns out that even a film like Dunkirk could easily pass the new standards with basic behind-the-scenes representation.

Mulan and Revisionism: Frank Yan, co-director of programming for the CineCina Film Festival, says the live-action Mulan has history completely backwards. How backwards? “Imagine a live-action film adaptation of Pocahontas, with Pocahontas played by a white actress, and the story reworked to be about European colonizers trying to survive against the assault of Native Americans,” he writes.

Dune Trailer: Maybe don’t watch this one if you’re afraid of worms? Good use of Pink Floyd’s “Eclipse,” too.

The O.C.: Theaters in Orange County, Los Angeles County’s oranger neighbor, are about to open, which means movie-starved carefully masked and sanitized Angelenos now have the option of driving down to see a movie. The downside: Orange County will only play Gene Autry musicals that do not meet the Oscars’ new diversity standards. (Kidding! A joke for my Orange County friends. But you can wear a cowboy-style kerchief if you like.) Deadline has details.

TIFF: The Toronto International Film Festival said it will NOT allow theatergoers to remove their masks once seated at screenings, after The Hollywood Reporter posted a story saying that patrons would be allowed to remove their masks once seated. No. “TIFF requires that masks are worn for the entirety of the time patrons are in TIFF Bell Lightbox, including while seated during screenings,” TIFF tweeted.

Award Season Changes: The SAG Awards, BAFTAs and more changed their dates in response to the Oscars shifting from Feb. 28 to April 25. That ceremony you might watch to make your significant other happy will now be held on a day you forgot about instead of a day that you’ll be busy working on a thing. IndieWire has more specifics.