Mixed Media: Award-Winning Touch Me Not Explores Notions of Intimacy Through a Variety of Boundary-Pushing Methods

And that’s just the beginning. Touch Me Not’s narrative structure and the particular kind of power it subsequently holds over audiences mirrors that of intimacy itself—caustic, atemporal, and wordlessly profound. It’s no surprise the film has been critically polarizing. Its very mission is to push into chambers of consciousness and emotionality we normally keep completely off limits. But along the festival circuit the film has been a hit. At its 2018 Berlinale premiere Touch Me Not made festival history by becoming the first film to win both the prestigious Golden Bear and the GWFF Best First Feature Award. I spoke with Pintilie over the phone in the midst of a whirlwind press circuit to discuss the the film, its technical contrivings, and its intimate power.

Ryan Coleman, MovieMaker Magazine (MM): How did this project begin? Did it begin with an image, an actor, an idea you wanted to work through?

Adina Pintilie (AP): When I was 20 I thought I knew how things went with intimacy. I thought I knew how relationships should function, what beauty is, how desire functions. With the next 20 years of life, the real ones, I realized I don’t know much. Reality is much more complex than our expectations, or what I call our normative fictions. People experience intimacy in ways that are vastly different from the ideas we grow up with. From society and from family you get certain ideas of how these things should work, and then you realize that life is actually much more complex and diverse. There are ways of experiencing intimacy, kinds of beauty, kinds of relating to one another that are as humanly valid and interesting even if they are different from the normative ones.

This film started with this intention: to try to forget everything I knew and look again, as if for the first time, at how intimacy really functions. Intimacy is a hugely important aspect to our lives but it is often full of many mixed feelings and contradictions. It’s very far away from that meat of “love” that we grow up with. To get at this tension the film is a mix of fiction and reality, in which we worked with both professional and non-professional actors.

MM: Why the mix of professional and non-professional actors? Was the casting process the same for both groups?

AP: In the end it did not matter if they are professional or not, or what their profession is, because we all worked with our human material. A mix of personal stories and fictionalizing elements, like re-enactments, dreams, memories, pre-enactments, even, of situations we are afraid of, fears of the future. It was a fusion, the whole process.

When I was searching for my collaborators it was not like regular casting, it was searching for like-minded people who would have the same motivations going into this kind of personal process. What was very important for me was to feel that each of them had something to share. That they entered into this dialogue with a point of view. It was not only an isolated research project that we did just in our group, but it is also something done through cinema, with the camera. I share this dialogue with the viewer and you enter this dialogue as the viewer. 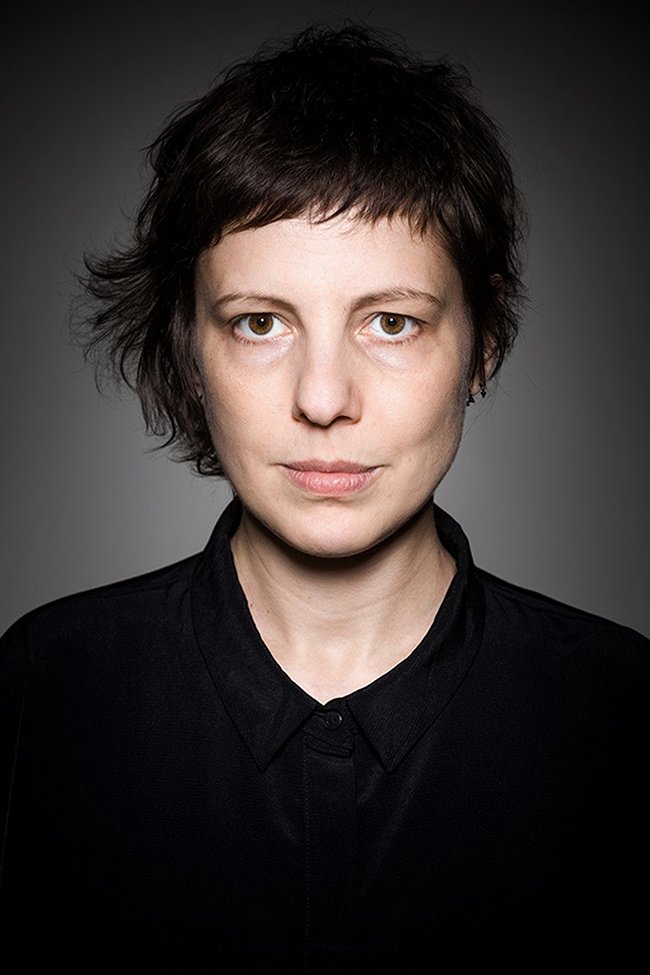 MM: At what point in the filmmaking process did you realize you needed to enter the film as a subject?

AP: The film was from the very beginning conceived as a dialogue. But the presence of the camera and the filmmaker was not planned. We used a teleprompter, a technical invention which has in my opinion a very strong emotional quality when applied to filmmaking. When the protagonist is talking to me they can see me directly in the lens, and through me, the viewer. The initial structure of the film was planned like this—we wanted to alternate the experiences of the protagonists with having the protagonists speak directly to the viewer. When I made a first pass edit of the film I realized that those moments, which are supposed to inspire emotional connection with the viewer were having the opposite effect. They had more like a Brechtian effect, taking the viewer out of the established storytelling flow.

This took me a long time to figure out, it seemed so paradoxical. After many revision attempts, discussions, and feedback, I realized that the way we experience cinema is very ingrained. There are two separate worlds—your body and your life is separate from the bodies and world on screen. I wanted this separation not to exist. It was very important that this channel remain open, between your body, the body of the viewer, and the body of the film. I wanted the viewer to know from the very beginning that they were in the film, so there is no bubble of disbelief. Break down the artifice. This is where the teleprompter came in. It offers you a very privileged access to the realities of these people, inviting you into dialogue with them.

So I introduced this apparatus, but it was still not enough. The priority was never the camera or the process, but this sense of discovery—discovering these fascinating human beings, a childlike discovery. Look how people can be, how bodies can be! But if the camera is just a witness it can be seen as occupying a position of control, detachment, or disconnection from the process. I realized that I, the filmmaker, was going through the same shit, the same emotional process like everybody else in the film. It became absolutely clear that for the film to work, I also had to share my experience, my hand in the filmmaking, to clarify my position as an emotional trigger of the whole process. I had already had some scenes dealing with my emotional material that we ended up using, which was good, because if I had to film it later in the process I may have been too self conscious. There was no choice but to bring it into the film, because I was in the same position like everybody. MM

Foreign Contenders: Steven Yeun on Being a Man Without a Country, and His Enigmatic Character in South Korea’s Burning
Transit: Christian Petzold Connects Past and Present Europe in His Refugee Drama