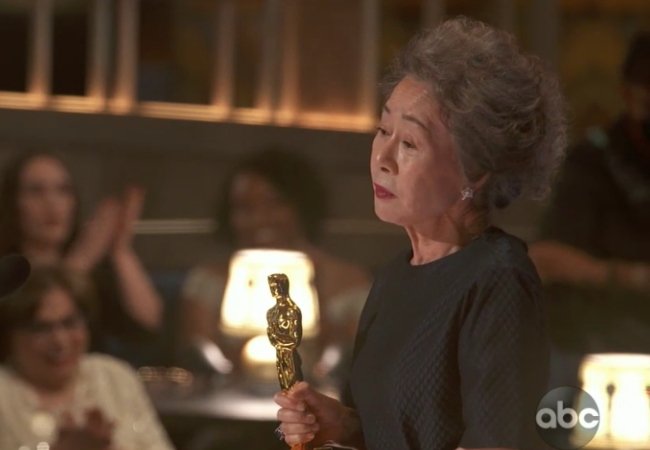 Yuh-Jung Youn forgives everyone who has said her name wrong. The Minari actress’ acceptance speech for the Best Actress in a Supporting Role got some of the biggest laughs of the night — and she spared no one’s feelings in calling them out for mispronouncing her name.

“As you know I’m from Korea, and actually, my name is Yuh-Jung Youn. Most European people called me ‘yuh-young’ and some people call me ‘you-jung,’ and tonight, you are all forgiven,” she joked.

Youn is the first Korean actor to ever win an Academy Award. She plays a grandmother who brings comfort and wisdom to a Korean-American family searching for the American dream by trying to build a new life on Arkansas farmland.

Before she thanked others involved in the movie, she gave a little shout-out to Brad Pitt, who presented the award to her and is an executive producer of Minari.

“Mr. Brad Pitt, finally. Nice to meet you. Where were you when we were filming in Tulsa?” she joked, earning another laugh from the audience. “I cannot believe I’m here. Okay, let me pull myself together.”

She took a moment to thank writer and director Lee Isaac Chung — “Without him, I couldn’t be here tonight.” 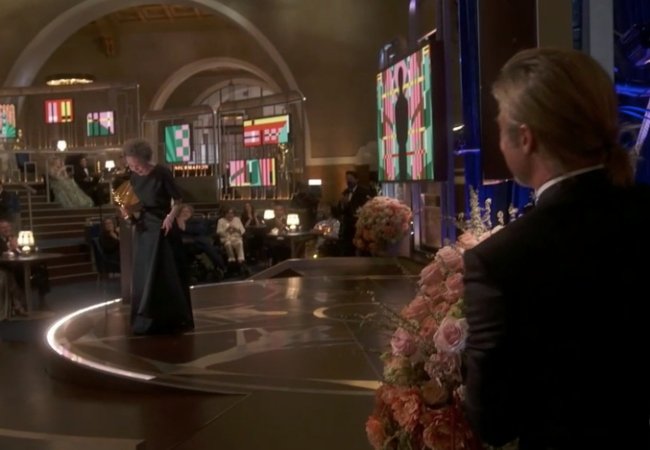 Brad Pitt shows Yuh-jung Youn where to exit the stage after her Oscars acceptance speech for Best Supporting Actress in Minari, via ABC

“See, I don’t believe in competition. How can I win over Glenn Close? I’ve been watching her so many performances,” she said, making Close smile. “All five nominees, we are the winner for different movies, we play the different roles — so we cannot compete [with] each other.”

Then she cheekily joked, “Tonight I’m here, I have just a little bit of luck — I’m luckier than you, maybe. Also maybe it’s American hospitality for the Korean actor? I’m not sure.”

Youn also thanked “my two boys who made me go out and work,” joking: “This is the result because mommy works so hard.”

And don’t worry — when her speech was done, Youn got her well-deserved moment with Pitt, who graciously ushered her off the stage.

Mank Breaks Irish Curse With Oscar Wins
Chloé Zhao, Nomadland Make Oscar History in a Year Like No Other