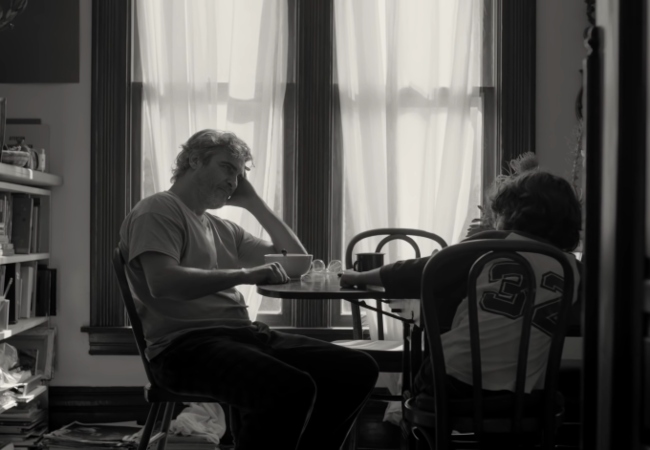 Most people listen to upbeat music while they work out — maybe dance music, top 40, or at least something above 150 beats per minute. But not Mike Mills, writer-director of C’mon C’mon, the new drama starring Joaquin Phoenix and Woody Norman. When Mills is at the gym, he listens to Erik Satie, a French composer of soft, languid piano music from the early 1900s.

“It’s very spacious, minimal music that was written in the ’20s. It’s piano — very slow, kind of boring. I work out to it,” Mills told MovieMaker.

He says Satie’s music gave him a lot of inspiration for C’mon C’mon, including the title.

“To me, it’s kind of like, I love Satie piano music, right? And I feel like [it’s] deeply open to interpretation. I tried to make the whole film a bit like that, and the title a lot like that,” Mills told MovieMaker ahead of the film’s release on Friday.

As for what the title means exactly, Mills joked that he doesn’t have a good explanation.

Also Read: Power of the Dog Cinematographer Ari Wegner on the Max Storyboarding Daily ‘Before Your Brain Melts Down’

“It’s a total intuitive thing. Obviously, like, I hear it in a lot of music, right? ‘Come on, come on,’ you know? It’s some kind of invitation. I wrote it as one of the many titles I had. A friend really liked it, and I was like, Cool. I really like it too. I can’t explain exactly why, and I like that openness,” he said. “I feel like there are so many things you can kind of play into it… there’s two of them. “They say ‘come on’ to each other a lot in the movie. And I feel like it is some kind of ‘come with’ or something.”

The idea for the film was born out of Mills’ relationship with his own child, but later morphed into a story about the relationship between all children and their parental figures.

“Well, it’s me and my kid, you know?” he said. “It’s such a radical change of your life… I feel like having a kid more than anything, you’re screwed. You’re not getting out of your relationship to society at large once you have a kid. And the future, you’ve, like — you just escrowed your whole heart onto this other person, which is really true. That’s, like, not a joke. And watching someone go through life, figure out things in such a, you know, from zero to 60, teaches you so much about yourself, the world, everything. So that’s space I really wanted to write out.”

Oh, and if you’re interested in working out like Mike Mills, here’s some fodder for leg day:

Multiple Men Play the Zodiac Killer in Zodiac. Adam Nayman’s New Book on David Fincher Explains Why
You Mean Everything to Me Follows a Young Woman’s Grim Coercion Into the Sex Industry (Exclusive Trailer)