Mike Mills Wanted C’mon C’mon To Feel Like a Fable, So He Shot It in Black and White 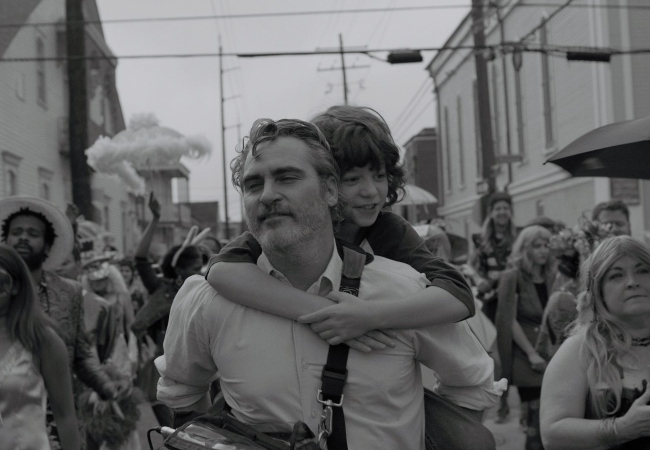 Mike Mills likes to joke that he’s pretentious, and that’s why he loves black and white movies. But there’s a deeper reason why he knew he had to shoot C’mon C’mon, his new drama starring Woody Norman and Joaquin Phoenix, sans color.

“I say that as a joke — a little bit like, I’m pretentious and I love black and white movies. And it’s also very true. So many of my favorite movies are black and white. I think it’s beautiful, so of course, I want to do it. But the reason I felt like I got to do it — or, like, A24 agreed with me and the world sort of agreed — was that it’s this image I had of this kid and this adult going through landscapes,” Mills told MovieMaker.

“To me, that image is an archetypal fable-like image. It’s an ancient image. And I wanted to kind of get into that fable, myth kind of feeling.”

Mills worked with Irish cinematographer Robbie Ryan, who would go out on weekends to capture the beautiful shots of cities juxtaposed with nature that populate the movie and lend it that mythical, otherwordly aspect.

“Black and white, because it’s a crazy abstraction, we’re no longer in the real world, right? We’re kind of in an art world, you know? That would help my fable part,” Mills added.

But there was another reason he favored black and white for this particular movie.

“I also feel like it does this nice double trick thing, or this opposing forces thing, where the film feels very much like a documentary. It’s very real. It’s very simple. It’s not like any fancy art world going on. And it feels like a fable at the same time,” he said. “I feel like the black and white actually helped both those opposing forces… having opposing forces to me just makes a film stronger.”

Main Image: Joaquin Phoenix and Woody Norman in C’mon C’mon, courtesy of A24.