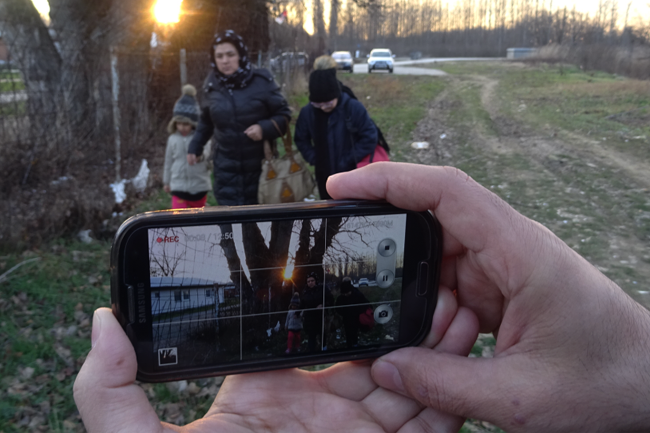 Midnight Traveler, a new documentary from producers Emelie Coleman Mahdavian and Su Kim, uses one of our most familiar possessions to personalize the refugee crisis: the family cell phone.

To many people across the world, the refugee crisis seems to be a distant issue. While frequently in the news, the crisis rarely permeates into many of our daily lives. Perhaps due to the scope of the issue, its distance from us, or the ways in which we are informed about it, many struggle to find a true and meaningful connection to what is affecting millions of people across the world.

Midnight Traveler personalizes the refugee crisis by introducing you to Hassan Fazili, Fatima Hussaini, and their two daughters, Nargis and Zahra. Hassan is an Afghan filmmaker who has a Taliban bounty on his head due to one of his previous films. As a result, he and his family have been forced to flee their home country in search of safer ground.

Shot entirely on the family’s phones, Midnight Traveler documents the family’s arduous journey to safety while providing an intimate look into what the refugee crisis and the process of seeking asylum is really like. Despite the heavy subject matter and unique nature of Midnight Traveler, Mahdavian (After the Curtain) and Kim (Hale County This Morning, This Evening) wanted to tell this story, both to help a family they care about and express what’s going on in the world in a way that has never been done before. They discussed Midnight Traveler with MovieMaker, focusing on the difficulties of communication, making tough calls on what to include, and their goals for the film’s influence on the world.

Sophie Jonsson, Moviemaker Magazine (MM): How did you get involved with Midnight Traveler initially?

Emelie Coleman Mahdavian (ECM): I wrote my dissertation in Tajikistan and shot a film there. I met them through the very small film community there since that’s where they fled to first, hoping to receive asylum.

Su Kim (SK): Emelie was in a fellowship program and I was working with one of the other directors in the fellowship program, so I met her at the Full Frame Film Festival. I didn’t actually meet Hassan until we were well into post, but we talked to him and such. It started out where I was just consulting and then my involvement increased as the production went into a different gear once the film was funded.

MM: It’s a very unique situation to be in. You communicated with him over email, is that right?

ECM: They had their phones with them during the filming so I was using different apps to communicate, ones where you can record messages to talk to each other or you can call each other.

(L to R) Hassan Fazili, Fatima Hussaini, and their two daughters, Nargis and Zahra maintain joyful spirits as they flee from the Taliban. Image courtesy of Oscilloscope

MM: What was the experience of directing and communicating in that way? Were you sending Midnight Traveler footage back and forth to each other?

ECM: When they were on the road, they were just shooting on their phones and they didn’t have enough bandwidth to really send anything through the phone other than messages because the videos were so large. I would arrange a contact in each country, and that contact would copy all of the footage and send it to me in the U.S. There was a bit of a delay between when they would shoot it and when I would get it, and then there was a significant delay between when I would get it and when I could assemble anything to send back to them to watch because they were shooting so much. A lot of footage took a long time to go through, get organized, and make a cut. It wasn’t until they were in Serbia that I went and met them in person to do a paper edit together, and then after that was when I was actually editing. It was a complicated process because it was much more mediated by the phones than it normally would be.

MM: You mentioned that you had a lot of material to pick from. With a documentary like Midnight Traveler, what do you think about the family’s right to privacy and what they get to choose to include or not to include? Were there certain things that you wanted in the film but they didn’t, or vice versa, and how did you balance that?

ECM: It’s such a sensitive topic, and we were also concerned about, not just the family, but also the other people who might appear in the film. Generally with the family, if they sent me something, they were fine with me using it. They were able to delete things off their phones that they didn’t want in the film so they had control over what I received. I didn’t find that there was anything when we were talking that I wanted to put in and they didn’t want to put in the final cut. Maybe the other way around, just because I think it’s hard to have distance from your own life, and sometimes things that I thought were not important parts of the film were things that were personally important to them, so taking their suggestions about what should be cut was important. In the end, they were happy with the edit, but it was certainly a collaborative process. Also, in the end, we did involve our attorneys to make sure that everyone else in the film was protected.

MM: At the end of the film, one of the daughters is heard saying that she absolutely won’t want to remember any of this in the future. What was your goal in making this film? Was it more of a personal choice to help document the journey, or was it to show outsiders, or people who maybe don’t know a lot about the refugee crisis, a true view of the refugee experience?

ECM: For me, in the beginning, I was there just because I had agreed from the beginning to help document the situation. Neither Su nor I went out looking to make a film about refugees, but that’s what someone who I cared about was going through so that’s why I had agreed to help them. I do think now with the film completed, looking at it going out in the world, it’s certainly allowed people who may not have the opportunity to walk in the shoes of a refugee to experience this journey with them, rather than from a journalistic perspective.

Midnight Traveler was filmed by the family entirely on mobile phones.

SK: I think what it was really about was the notion of migration, which I feel is a very important issue right now. Most of the films that are in the world, or even the news stories, have a kind of journalistic portrait. When I saw the material initially, what drew me to it was the fact that it was from the point of view of the people who were actually going through the process. It wasn’t shot by someone from the outside who comes in and makes a project or news article or a documentary. What drew me to it was that it felt so personal and that it was really through the eyes of the people going through this journey. Also, showing all the things that happened as they were going through this journey, it’s not this kind of high-stakes, high-drama thing, it’s mostly about waiting. So the goal was to really show what this process is like, and in a way, I think that’s the way to start the conversation around these issues.

MM: When you were editing the film, obviously you have the whole family to consider. How important was it for you to balance the child and adult perspectives in the film since the children give a much more innocent take on the situation than the adults?

MM: Who did you maintain contact with the most? Was it Fatima and Hassan, or more just Hassan?

ECM: Both of them, but more him. I would talk periodically to her, even sometimes to their daughters, while they were on the journey. Sometimes Hassan would check with Fatima about how she felt about something and then get back to me. I was also aware that not everything that was going into the film was something that the kids needed to see. I would send something to Hassan and say, “Can you look at this?” and then he would make the decision of what would filter through to the rest of the family at that stage. I didn’t want to send something that could be retraumatizing.

MM: I can’t even imagine the kind of toll a journey like that takes on a family and marriage, not to mention filming it and then having to go back and relive it.

SK: I think it’s pretty difficult. You see them in the film holding things together quite well, but in that situation you don’t have a choice other than to hold it together.

MM: As far as you know, has the Taliban been made aware of the film or have they responded to it in any way?

ECM: I don’t know what their awareness of it is, I don’t have great communication channels with the Taliban (laughs), but I would actually be really interested to hear. No further threats have been made against the family that we know of, but as you see in the film, you don’t always know about those things.

MM: When is the last time you spoke to the family, do you know how they’re doing now?

ECM: They’re in Germany. They have a pending case with the German government, so they’re living in housing for asylum seekers and they’re waiting there for answers on their case. MM

How The Riot Act Director Devon Parks Recreate Life in Another Century
El Camino: Why Vince Gilligan Stays Focused on the Corner of Holly and Arroz