Named for the pioneering African-American filmmaker Oscar Micheaux, the festival will be the first to get audiences into theater seats since the coronavirus forced the entertainment industry to shut down in March 2020. Founded by Emmy-nominated creators Noel Braham and Courtney L. Branch, the multicultural festival advocates for diversity and showcases BIPOC creators. The virtual portion of the ceremony took place from April 26-29, with in-person events going on from Friday through Sunday.

“We’ve always been filmmaker-first. That is our mentality, even beyond just the project and the content,” Braham told MovieMaker ahead of the in-person portion of the third annual festival, which is being held at the TCL Chinese Theater in Hollywood. “We also look deeply into their backstory, their journey, both their sacrifices and their successes and understanding who they are behind their work and behind their art.”

With this year’s theme being “disruptors,” it’s fitting that Micheaux is disrupting the pandemic’s plans to keep filmmakers out of their second home — the movie theater.

“Noel has kind of had this vision — he’s been saying it since probably January. I was always like, ‘Are you sure? You think so?'” Branch said of the in-person festival. “Everything really just kind of worked out, from his mouth to God’s ears.” 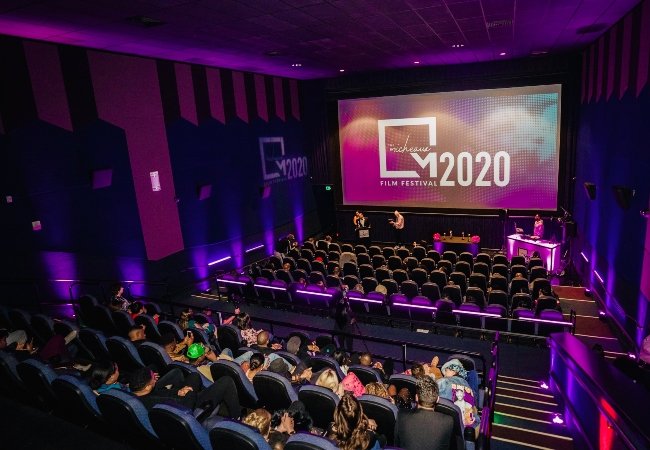 Inside a screening at last year’s second-annual Micheal Film Festival in 2020.

When they heard that theaters were getting the OK to begin reopening earlier this year, Braham and Branch immediately started planning the logistics of where they could hold physical screenings.

“We want to give our filmmakers this experience of being back in the theater,” Branch said. “What’s most significant to us about it is that our festival last year was actually at the end of February. So we were a lot of filmmakers’ last in-person experience before the shutdown, and now will be a lot of their first experience right after the shutdown.”

Early on in the festival’s planning, they had even reached out to the now-defunct Arclight as a potential location.
“Unfortunately, Arclight never got back to us. They were never open,” Branch added. “And then, probably a couple of weeks ago, we saw the news that they had to completely shut down and it was kind of a surprise — but also after doing all that research and contacting, it was like, well, that makes sense.”

Also Read: The Meeting Director on Casting a Survivor of Sexual Assault as Herself

The fact that the festival is being held at the historic TCL Chinese Theater, home to countless Hollywood movie premieres and three Academy Awards ceremonies, is a feat in and of itself. Up until earlier this week, the festival was originally set to be held at AMC 15 Century City — but when Branch and Braham realized the demand for tickets was higher than AMC could accommodate with limited seating, they worked out a last-minute deal to move all 70 in-person screenings to the Chinese, which has a much larger seating capacity.

So far, they’ve sold about 600 all-access passes for the weekend at the affordable price of $35 each. The festival will also feature a real-live red carpet outside of the theater on Hollywood Boulevard, and Panavision will be award $75,000 in grants to some winners. On Sunday, actor and filmmaker Robert Townsend, known for the groundbreaking Hollywood Shuffle, will be honored with the Oscar Micheaux Trailblazer of Excellence Award.
To make things as safe as possible, the screenings will have socially distanced seating, with three empty seats for each one that’s occupied, and everyone will be required to wear masks for the duration of the event.

“If there was one thing that was most important before anything else, once again, it was health and safety,” Braham said. “It was also ensuring that we can accommodate guests, especially those coming in from out of town. Filmmakers have sacrificed so much to even get their project done. And then on top of that, just ensuring that the community and those who wanted to support those filmmakers would also have a space.”