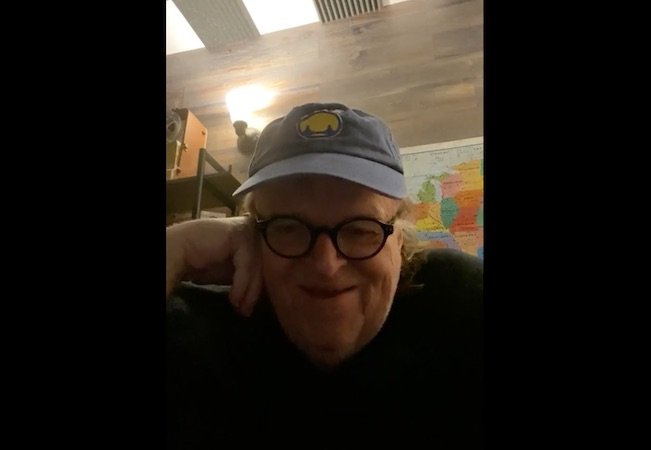 Michael Moore urged Democrats to remain calm and not let President Trump’s voters try to intimidate them — while admitting he tries not to think about the fact that Trump will still have the nuclear codes until Jan. 20 if he loses the election.

In an election eve Facebook Live discussion with fans, Moore — who correctly predicted Trump’s surprise victory in 2016 — stressed that Trump could still win. But he agreed with a fan who said the next two months “will be hell” even if Trump loses.

“That’s the problem. He has more than two months before he’s done on Biden’s inauguration day. And remember, there’s no inauguration for Biden unless everybody gets out and votes. … But assuming this happens, I think it’s actually legitimate to say it’s a fairly scary time here for these next two months, two-and-a-half months. And what are we going to do?”

He continued: “You don’t even want to think of the fact that that soldier who goes with him everywhere with a briefcase is still going to be with him for two-and-a-half months, with the nuclear codes. Just that alone — it might be something we have to fix in the future. I think like once you’re voted out, the U-Haul should pull up the next day and that’s that.”

Can You Take 10 Seconds to Sign Up for Our Newsletter, the Movie News Rundown?

Trump has signaled that he might not make things easy for Joe Biden’s team if the Democrat wins the election, making baseless accusations that the Obama Administration undermined his own transition.

Also Read: Take a Tour of the Real House Where Buffalo Bill Lived in Silence of the Lambs

Moore titled his talk “Michael Moore’s Election Anxiety Middle of the Night FB Live Meet Up with Everyone Else Who Can’t Sleep Because the Polls Open in 3 Hours.”

The director, whose latest film, Fahrenheit 11/9, is streaming free on Amazon Prime, stressed throughout the broadcast that people can have political differences without resorting to violence.

He told another fan he doesn’t worry about Trump supporters who have formed caravans of vehicles. The FBI is investigating a case in which vehicles with Trump flags surrounded a Biden-Harris campaign bus in Texas.

“I don’t pay any attention to them. I think it’s kind of silly and I feel sorry for them in some ways. Maybe I shouldn’t,” Moore said, adding: “Don’t worry about them. Don’t be intimidated. That’s all they want to do. You’ve known these guys since fifth grade. Since high school. They’re bullies. What do you do with a bully? How do you stop a bully? Do you remember how to do that? Anybody who did do that?”

He continued: “I did that in grade school. It helped that I was the tallest and biggest kid in the class,” he laughed.

When another fan asked whether they could feel safe in their home on election night, given that they live in “Trump country,” Moore replied: “Yes, I think so. Other than Trump people, Trumpsters that also have a thing with alcohol — obviously that’s always a problem — generally I’m just not going to worry about them. Their bark is bigger than their bite. … We give them power when they’re afraid, so let’s not do that.”

He also predicted Trump will continue to talk with his base, no matter what happens.

“Oh absolutely. Are you kidding? This is like his reality show is back and it’s extended for the rest of his life. … There will be 60 million people at least voting for him if not more. That’s a big audience. He’s not going anywhere. Maybe he’ll start his own news network. … We are going to have to look at him and see him and hear him. Eventually though we raise enough kids — every year, 4 million 17-year-olds, become 18, that means they become voters. These kids, not too many of them are going to want to vote for Republicans anymore. That’s a good thing. … Eventually Trump won’t have an audience.”

Fahrenheit 11/9, directed by Michael Moore,is streaming free on Amazon Prime. If you enjoyed this article you might also enjoy this interview with Wolf of Snow Hollow director Jim Cummings about becoming your own film studio: