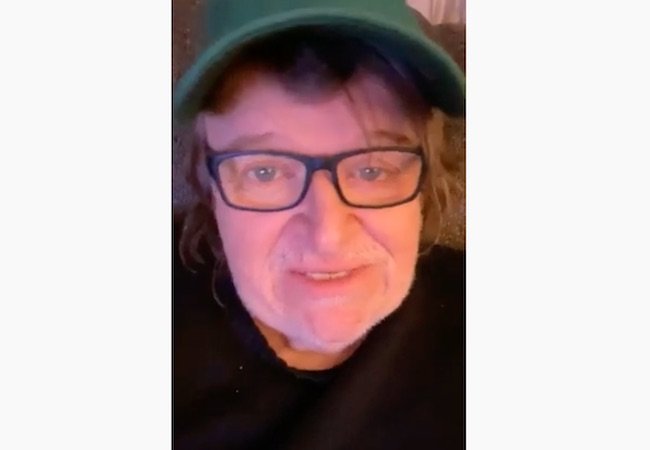 So much for the war on Christmas: Michael Moore posted a pre-dawn video called “‘Twas the Night Before Trump Removal” where he responded to the election returns by playing the song “It’s Beginning to Look a Lot Like Christmas” and declaring: “Yeah! It’s like Christmas. We’ve been up all night waiting for Santa.”

The Fahrenheit 11/9 filmmaker also celebrated by wearing a Christmas-green cap from Georgia’s famed golf tournament, the Masters. At one point he read a version of “‘Twas the Night Before Christmas” accompanied by “Carol of the Bells,” that included characters like “Melania mouse,” “Kamala in her kerchief” and “Biden in his cap.”

Moore read: “Unlike dictators before him/from Pinochet to Hitler/Trump barked his commands/through an app he called Twitter./He whined and he moaned/and he lied through his teeth/but he was destined to fail/in his attempt as a thief.'”

Moore was in a much more jovial mood than he was the night before the election, when he fretted in another video about Trump continuing to hold the nuclear codes for two-and-a-half months even if he’s voted out of office. He said he didn’t think Trump supporters would react with violence.

Won’t You Take 10 Seconds to Sign Up for the Rundown, Our Fast-Read Newsletter?

Moore said he was recording his Friday-morning message a little after 4 a.m.

At the start of Moore’s recording, Biden was leading in Arizona and Nevada, while Trump was ahead in Pennsylvania and Georgia. But during the broadcast, Biden took the lead in Georgia, too. At the time of this writing, he also leads in Pennsylvania.

“Biden is very close to winning right now,” Moore explained, after optimistically suggesting that “we’re going to get rid of this electoral college,” something the United States hasn’t seriously attempted since 1970. Moore said it could be done through a National Popular Vote, in which states would agree to help ensure the winner of the popular vote wins the election.

Of course, Moore has been right before: He was one of the most prominent people on the left to predict Donald Trump’s surprise victory, and also correctly predicted, on election eve, that Trump wouldn’t go down without a fight this year, no matter what the returns said.

“That’s the problem. He has more than two months before he’s done on Biden’s inauguration day,” Moore said earlier this week. “And remember, there’s no inauguration for Biden unless everybody gets out and votes. … But assuming this happens, I think it’s actually legitimate to say it’s a fairly scary time here for these next two months, two-and-a-half months. And what are we going to do?”

He continued: “You don’t even want to think of the fact that that soldier who goes with him everywhere with a briefcase is still going to be with him for two-and-a-half months, with the nuclear codes. Just that alone — it might be something we have to fix in the future. I think like once you’re voted out, the U-Haul should pull up the next day and that’s that.”

Trump clearly hasn’t ordered a U-Haul: His attorneys are fighting over vote tallying in several states. Moore criticized him this morning for his “terrible statements about how this is all rigged.”

“All the states where he’s winning the votes are legal, he said. And where he’s not winning it’s illegal,” Moore said. “I just have this feeling, don’t you, that he’s just not going to get away with it this time.”

“I feel the end of the Trump era,” Moore declared. “Christmas is coming a little early, perhaps.”

Silence of the Lambs House Where Buffalo Bill Lived Is on Sale. Here’s a Tour
5 Films Set in Delaware, Home of Our New President