Mare of Easttown creator Brad Ingelsby has been trying to tell a story set in his hometown region outside of Philadelphia for a while now. He’s gotten close on a few occasions.

2018’s “American Woman was actually set in the same community,” Ingelsby tells MovieMaker. “And we ended up having to shoot it up in Boston because the tax credit had run out in Pennsylvania.”

He adds that his script for 2020’s The Way Back, which stars Ben Affleck as an alcoholic basketball coach, “was set in the northeast, in the same part of the country.” But scheduling issues caused them to “transport that story out to Long Beach,” near Los Angeles.

“Man,” he remembers thinking. “I’ve gotten close to telling a story about home and shooting it at home, but I’ve never actually been able to do it.”

His new series Mare of Easttown takes place in the fictional Easttown, a small town outside Philly. (There’s also a real-life Easttown Township, not to be confused with the pretend Easttown.) Easttown is very similar to Berwyn, Pennsylvania, where Ingelsby grew up, and the show has drawn raves for its authentic portrayal.

“There was a part of me that wanted to tell a story about the rituals of life where I grew up: Friday night was pizza night, we’d go to the local pizza shop and all sit around watching the basketball games. My aunts would be chatting away in the kitchen or on the back deck. Mare of Easttown was an attempt to capture how I grew up and the people I grew up with.”

Ingelsby notes that while he “didn’t grow up with a murder investigation” or “with a lot of cops,” he “certainly grew up around a lot of women” and “in the Catholic church” with priests in his family.

Ingelsby says that every one of his scripts “starts with a character and a place that interests me.” The plot, in this case a murder investigation of a young mom, is really just “an excuse to tell this story about this person.”

“This person” is of course Detective Mare Sheehan, portrayed by Kate Winslet, who finds herself in Emmy contention for Best Actress in a Limited Series category once again. (She previously won this award back in 2011 for the HBO series Mildred Pierce.)

The character of Mare materialized from chatting with friends back east. “I spoke to a cop buddy of mine, and he said to me, ‘I used to work at this little station where it was me and 11 other officers, and there was one detective,’” Ingelsby says.

“And that was interesting: this one detective in this town has to solve essentially every crime that comes across their desk. That’s an interesting character: someone that has to struggle with the professional and the personal.” 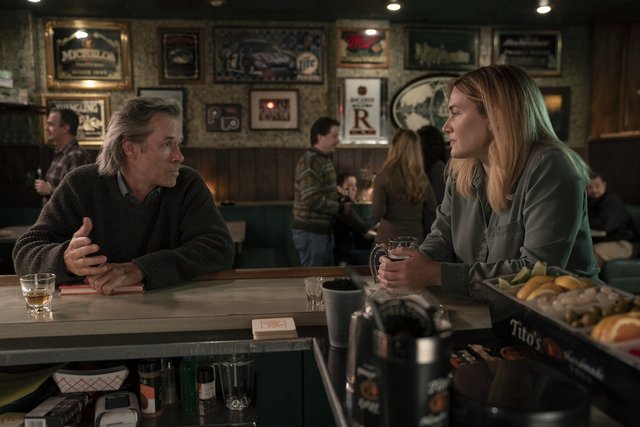 Guy Pearce and Kate Winslet in Mare of Easttown, created by Brad Ingelsby and executive produced by Mark Roybal

Ingelsby has built a strong career as a screenwriter, with intimate character dramas that include The Way Back, Out of the Furnace, and Our Friend, but this was his first foray into television and the concept of structuring a story in episodic form was a challenge.

Thankfully, he had executive producer Mark Roybal. While this is Ingelsby and Roybal’s first official collaboration, they’ve known each other for almost a decade now, dating back to Ingelsby’s script Nancy and Danny, now titled Hold on to Me. In a phone call with MovieMaker, Roybal calls that script “one of the great unmade scripts.” At one point, director James Marsh (The Theory of Everything) was attached and A-listers Robert Pattinson, Adam Driver and Carey Mulligan were all set to star.

Previously a top executive at Fox, Roybal noticed that it was getting more difficult to produce the type of stories that he wanted to.

“I was making big studio movies. And the movies I really wanted to make work were things like Nancy and Danny and character-driven stuff. That’s what Brad was writing. And I realized those kinds of movies were not being made on the studio level and were getting harder and harder to make on the independent level. It was migrating toward television.”

When he made the move to television studio Wiip a few years ago, Ingelsby was one of Roybal’s first calls. Over breakfast, Ingelsby told Roybal that coincidentally he had just finished a TV pilot he had written on spec. Roybal had read everything that Ingelsby had written up until that point and Ingelsby eagerly sent the pilot to Roybal.

“We had that trust and he knew that I was going to read it carefully and quickly and come back to him with honest comments. He knew that it was a safe space and that we always talk candidly,” Roybal says.

This level of trust is invaluable between a producer and writer. Ingelsby describes Roybal’s influence on Mare of Easttown:

“Whenever we hit an impasse with the script, I could always go to Mark and say, ‘Here’s where we’re at: We can go A or B. And he would say, let’s go to A because of these reasons, and they would all make sense. Mark is such a smart guy with keeping the eye on the prize of: What’s this story really about?’” 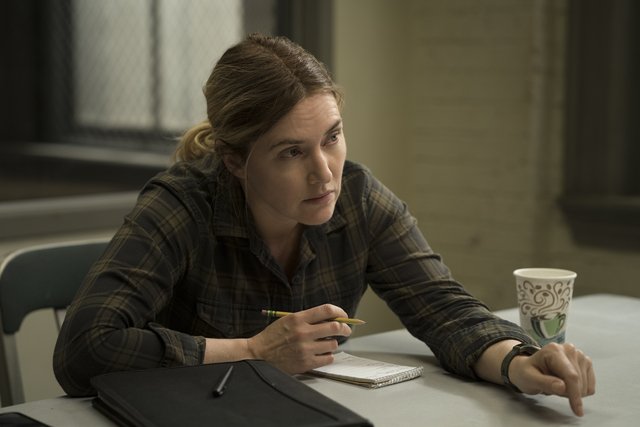 Kate Winslet in Mare of Easttown, created by Brad Ingelsby.

Roybal and Ingelsby both acknowledge certain audience expectations when operating within this genre, and Ingelsby says it was a challenge to both subvert and meet these genre expectations at different moments in the writing process. And with weekly episodes hitting HBO every Sunday, the idea of the cliffhanger was key.

“You want the audience to leave every episode going, ‘Oh, my goodness, I have to watch the next one now,’” Ingelsby says. “And yet those cliffhangers can’t be artificial, they have to be organic, and they have to feel as much a part of the world as the rest of the series.”

Roybal is more hesitant to use the phrase “cliffhanger,” out of concern that it implies contrived constructions. Instead he describes working with Ingelsby to ensure “every episode ends with some kind of thrust. … a real charge at the end there to make audiences want to tune back in.”

Ingelsby describes himself as an intentionally slow writer.

“I’ve never outlined anything. It’s like a lazy river ride, let’s just take our time. The more time I get to spend with these people, the deeper I get to know them, and then the richness of the detail will come through on the pages,” he explains.

He started with Mare, then filled out the other characters. “But I refused to start the scripts until I knew what the ending was. So in that case, I had really plotted out in a way that I never had done. And so that was an adjustment. But I still didn’t do a heavy outline,” he says.

The way audiences consume these narratives was also a factor to consider when outlining a mystery.

“There are people that are going to play the guessing game, and how do we keep them on the edge of their seats? How do we not let them get ahead of us? How do we make moves that are surprising? So that kind of genre welcomes an outline of sorts,” he adds.

“It’s the order of revelation: How and when do you reveal things? That’s the outline part of the murder mystery that I found. And that was the tricky part. But it did make me use the outline part of my brain that never gets accessed when I’m doing movies.”

The series finale of Mare of Easttown, created and written by Brad Ingelsby and executive produced by Mark Roybal, airs on HBO this Sunday.