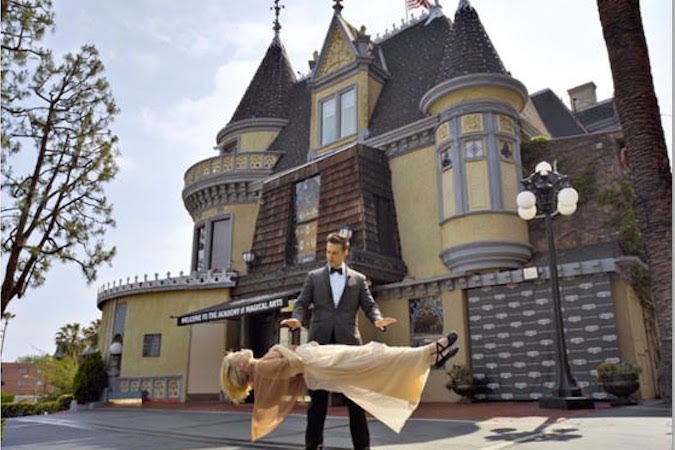 There’s no such thing as magic. As Alexis Manya Spraic’s documentary M for Magic demonstrates, what appears to be magic is actually the product of careful planning and discipline by artists we call “magicians.” That’s also the case with the Magic Castle, the Los Angeles institution that appears to levitate effortlessly over Hollywood.

Guests enter through a secret door and delight in the up-close card tricks, onstage deceptions and mental games that will puzzle us for the rest of our lives. Unlike almost every other hot invitation in Hollywood, an invite to the Magic Castle can only be issued by people who did magic in high school: In most cases, you need a member’s blessing to attend.

But the film isn’t just about magic, or a single location. It’s about a family’s perseverance—and all of Los Angeles.

“It’s about the community that had to exist to keep something going in Los Angeles for now almost 60 years,” says Spraic. “Anyone who has spent time in L.A. knows that we don’t have things like that. Every one of its contemporaries has fallen to the wayside.”

What we said above about what a hot invitation the Magic Castle is? We should clarify: It’s never been that hard to get in. You need, again, careful planning and discipline. Ask friends and friends of friends. (Even I’ve been there, and no one likes me at all.)

The person who gets you in probably won’t be a Hollywood power player. It will probably be someone obsessed with card tricks.

One of the best tricks in magic is that sometimes the so-called magician isn’t doing the hardest work. Sometimes he (it’s usually a he) is just keeping us distracted while an “assistant” (usually a she) does the actual trick, which they’ve both coordinated through planning and discipline.

For years, brothers Bill and Milt Larsen received most of the credit for the castle’s creation in 1963. Only later did Irene Larsen, Bill’s wife, come to be recognized as the third key founder. She was there nearly every night, the perfect hostess, while also helping run everything behind the scenes.

A magician’s assistant, if you will.

“Even now if you just Google ‘the Magic Castle,’ it’s amazing to see her not mentioned,” Spraic said. M for Magic finally tells the story of her sacrifices and contributions.

When the castle fell on hard times, Irene Larsen and her daughter, Erika Larsen, a producer of M for Magic, were among the key people who saved it.

Another was Neil Patrick Harris, who was part of the castle’s junior magician program as a child star and later became president of the Academy of Magical Arts. While staring in How I Met Your Mother, he mounted a publicity campaign and worked behind the scenes to bring the castle back to greatness.

He’s one of the celebrities who feature heavily in the documentary, which also includes a Greek chorus of celebrities who are huge Magic Castle fans. Some, like Penn & Teller, you would expect. Others, like Colin Farrell and Laurence Fishburne, you may not. But they provide some of the most emotional and surprising moments in the film.

One thing the doc doesn’t do: Reveal how any tricks are performed. Spraic took care not to let the camera linger in any way that might have compromised the audience’s sense of wonder. Watching the documentary, you could come away convinced that all the magic onscreen is real.

You’re probably thinking: Where can I watch this immediately? But unless you’re a film distributor or member of the media, you probably can’t. M for Magic is one of countless films that were supposed to debut at the sadly cancelled SXSW.

It’s the rare film, however, that might play as well on the small screen as the big. Distributors looking for fresh video-on-demand releases would be smart to check it out. If we’re going to be inside for a while, it could be a very inspiring distraction.

The Magic Castle, like every live venue, is hit hard by coronavirus precautions mandating that we all avoid public gatherings. It will be hard for some of them to come back.

It won’t happen by magic.