Location of the Month: Northwest Arkansas 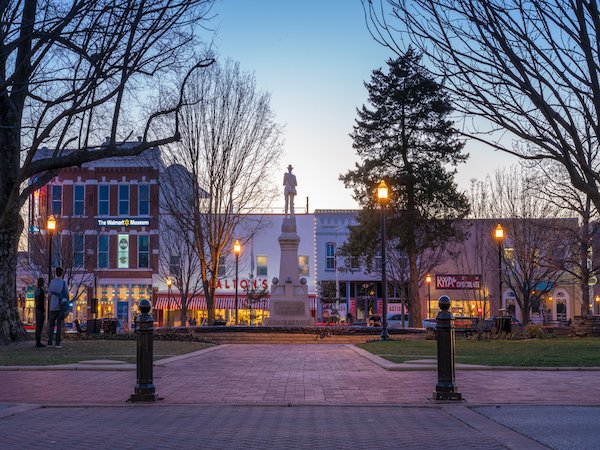 As the home of Geena Davis’ Bentonville Film Festival — and the latest season of True Detective, Northwest Arkansas boasts strong tax incentives, ample studios and post-production facilities, and most of all a film-friendly climate. If you’re looking for an eclectic, authentic community where you can shoot everything from skyscrapers to gorgeous nature to mountain shacks, Northwest Arkansas might be perfect for your next shoot.

There’s no faking Northwest Arkansas. Once we went there, we fought for it,” True Detective production designer Ryan Warren Smith recently told Architectural Digest. The crew shot in Fayetteville and Eureka Springs, and though the region has experienced massive growth, some pockets were still untouched enough that they could be dressed up for scenes set in the 1980s and ’90s.

The film festival, which Davis founded five years ago with ARC Entertainment executive Trevor Drinkwater, is just one of the ways the region celebrates diversity and inclusion. The festival helped lead the charge in making inclusivity a given, not just a buzzword.

The region also boasts a wide range of locations — from rural to urban to historic to rustic — and an abundance of natural beauty in the forms of mountains, lakes and rivers. But state-of-the-art studios, sound stages and equipment-rental houses in the area’s six cities are a short drive from even the most rugged locale.

Access to local crews, as well as information on incentives, is as easy as clicking here for FilmNWA.

“The entire area provides a rich tapestry,” location manager Batou Chandler says. “We shot at a home in Beaver Lake that had horse stables, and we filmed in tiny towns with simple houses; the next day we’d be in an exquisite mansion.”

He also praised Eureka Springs, an area he said is “so unique and defies explanation with midcentury-modern homes set upon cliffs.”

“It speaks to the contrast that exists in that land,” Chandler says. “It’s an interesting contrast of ideology and architecture.”