Kustendorf 2013: A dispatch from the mountains of Serbia
by Peter Weed 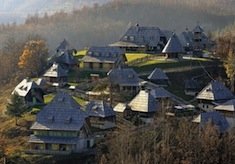 The Kustendorf Film and Music festival—which runs concurrently with another snowy, high-altitude American film festival—opened Wednesday, January 16th on a soggy night in the mountains of western Serbia. An elaborate light show played over the facade of a replica Orthodox church, followed by brief words from festival founder and director, Emir Kusturica. Then a brass band gamely led the wet throng into a packed theater—fire codes be damned, thoughts of the Coconut Grove fire dancing in my head. Inside, the theater was standing room (I was a standee) for Zhang Yimou’s The Flowers of War. Yimou noted, via interpreter, that it was a pleasure to attend a festival devoted to culture rather than commerce.

In fact, the lack of commerce at Kustendorf is striking. Not a corporate logo to be found. Nary a step-and-repeat board for VIPs to be photographed against.

I arrived the day before the opening, and it was a dramatic entrance. Recovering from the flu, I was flown through the mountains in a tiny helicopter piloted by a texting, former Serbian military pilot. Through a miraculous force of will I was able to keep down what little I had in my system.

The trip was a fluke. The helicopter flight is usually reserved for VIPs (The Johnny Depps of the world, I was told). Everyone else must make a four-hour slog from Belgrade via bus. However, my arrival time and an empty spot in a four-seat helicopter opened up the opportunity for me. I flew in with Michael Hausman, a New York-based producer of numerous films including Brokeback Mountain, Man on the Moon and Gangs of New York.

As we walked toward the helicopter Michael looked at the small machine, then toward me, and raised his eyebrows. He asked the pilot where the machine was made, which seemed like a very sensible question. “Torrance!” the pilot said emphatically before lifting off.

Seen from the air, Kustendorf’s setting is dramatic. The wooden, Serbian-styled buildings are clustered on a mountaintop—Kusturica’s vision of a traditional village. The pilot heightened the impact of the view with a swooshing, banked fly-by, before landing on the wooden “heliopad.” We were greeted by offerings of bread and salt. The bread is dipped in salt and eaten. With my shaky legs on the ground, it felt like taking the Eucharist.

Sundance Dispatch 05: MovieMaker sits down with Grand Jury and Audience Award-winner Ryan Coogler of Fruitvale, the team behind the 99% documentary, and the President of Yekra
Küstendorf 2013: Emir Kusturica, the Mayor of Küstendorf

StudioFest Offers a Chance to Make a $50K Film