Embracing Change: Director Kendall Goldberg On Her Feature Debut When Jeff Tried to Save the World

“I am a creature of habit,” says When Jeff Tried to Save the World director Kendall Goldberg. “But while I was writing this film, I was going through a lot of change in my own life. And I had to learn to embrace it.”

A 20-something herself, Goldberg deftly captures the precariousness of millennial anxiety in her debut feature When Jeff Tried to Save the World. Jon Heder leads the ensemble cast with heart and humor, lending Belushi-like pathos to his turn as the manager of a vintage bowling alley on the brink of closing.

Goldberg sat down with MovieMaker to discuss determination, collaboration, and the importance of taking a leap of faith.

I enjoy coming up with ideas based on locations. I find myself really attracted to the look or the feel of a place, and then I work backwards and think, “Who comes here, who lives here, who works here?” I was intrigued by the idea of a bowling alley. And then I settled on the idea of a manager because the manager is someone who has a lot of control but not full control. So there was the potential for that conflict where the rug can be ripped out from under him.

The neon lights of a bowling alley helped inspire Kendall Goldberg and Rachel Borgo to write When Jeff Tried to Save the World.

I was talking to [co-screenwriter] Rachel Borgo about this recently…there was never a moment where we went, “let’s make him a thirty-year-old man.” Subconsciously I was choosing someone who was physically different than me so that I could project my own insecurities and fears into the character.

On Working With Jon Heder

We did an initial search with a casting director at the very beginning, right after I had a solid draft of the script. This was when I was a sophomore in college, and I thought that I would cast it, find the money, and make it that next summer. It was very naive to think that, but I’m glad I had the determination because it definitely got the snowball rolling down the hill.

Jon came in to audition one day. The script was at Gersh and they sent him in, which was a nice surprise. I had never seen Napoleon Dynamite, which I think is a good thing because I wasn’t nervous – he was just another person coming in to audition. And he gave a great audition. So I told him, “I’d love to offer you the role, we’re just not ready.” And he was like, “That’s alright, it’s an indie film, I understand.” So we kept in touch and he said he’d do it if he was available. We Skyped and got lunch a couple of times. I’m sure he didn’t expect me to be as persistent as I was, but I was.

Jon is a very technically-talented actor. He knows what goes on behind the scenes, he was always asking good questions. And that’s because he went to film school himself.

On Working With a Comedic Cast

The cast came in with their own ideas, which was great. I gave them permission to go off-script, but would be specific about times I wanted to stay directly on-script and they were ok with that. Most of them have improv experience, especially Jim O’Heir and Steve Berg. We did this thing that Jim did on “Parks and Rec,” which is going through and getting a great take of the scripted version and then doing a fun run if you have time. 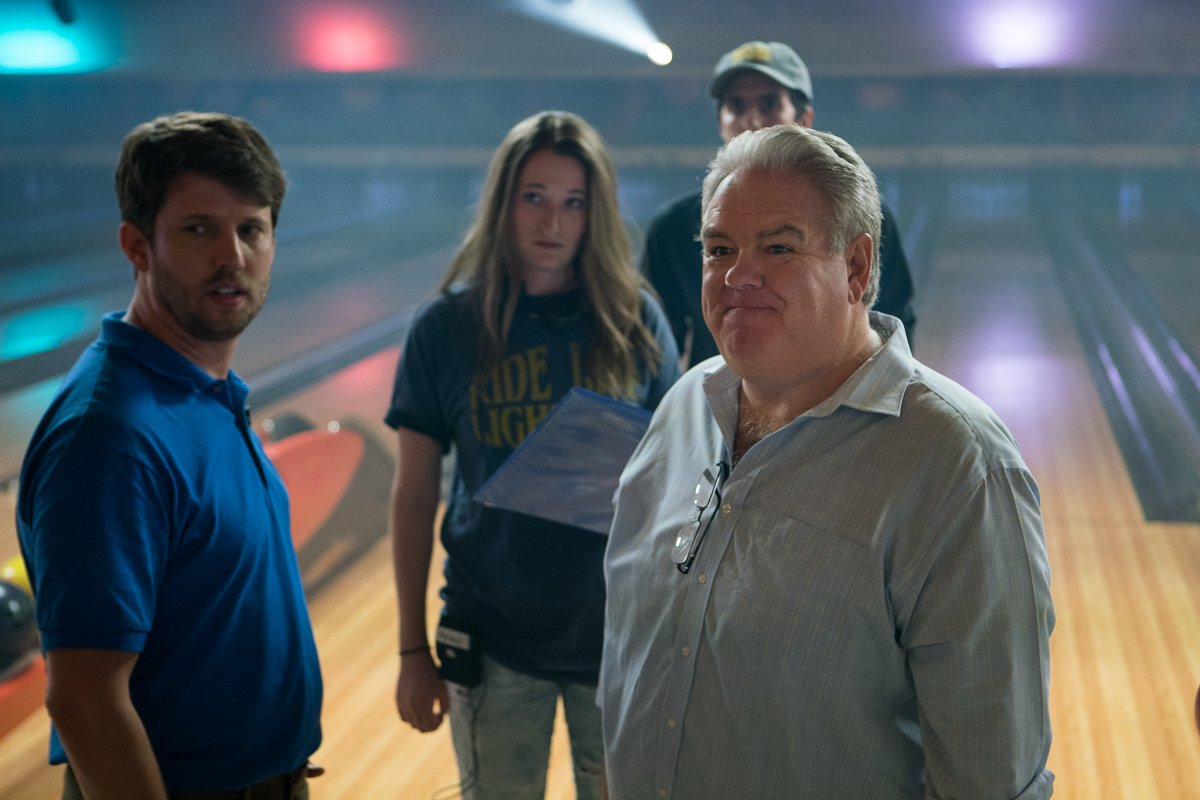 On Making a Short Version First

In the summer of 2016, I decided to make the feature into a short film, just because it was proving difficult to get the financing. That was the missing puzzle piece. It’s not that it directly got us the rest of the money, but it was more like, “Oh wow, Jon Heder and Jim O’Heir and the rest of the cast are willing to fly out to Chicago for four days and do a short for nothing.”

Kendall Goldberg and her crew were prepared to make the feature after the prep work that was making a short.

The short was basically rehearsal. At first, I wasn’t excited about doing the short and thought it was two steps back. But it was a dry run of the feature, which was pretty amazing and something you don’t always get.

We shot it in 18 days and had an editor [Meaghan Wilbur] working while we shot, so we had a rough cut maybe three days after we wrapped. I’m not a big fan of taking time off. People always recommend that the director direct the movie and then go take a vacation for two weeks, but I was like, “I can’t, I’m too excited.” So I came back to LA and immediately began working twelve or thirteen hours a day with the editor.

The When Jeff Tried to Save the World crew celebrating the end of a fun, collaborative process.

The score was one of my favorite parts of the process. I met a young composer, Hannah Parrot, at Sundance in 2015. We kept in touch and she sent me her stuff, and she was incredible. She’s basically my age, so very young and easy to talk to. I started having initial conversations with her, just like I did with my DP Nico [Aguilar] and my art team. Music’s a medium you have to be familiar with as a director, but I didn’t think I’d be able to speak fluently in musical language. I am an amateur musician, so I know a little bit about it. I sat with her in her studio and played instruments, and got to really “do” the whole thing.

I’ve known from the very first draft of the script what I wanted it to sound like. It goes with the feeling of the world that we wanted to create for Jeff, where the bowling alley is his everything. Maybe a viewer wouldn’t necessarily think of a bowling alley like that, but we had to make them think like that. It was all about adding to the neon beauty of the place when it’s turned on. MM

Foreign Contenders: Director Radu Jude on Romania’s I Do Not Care If We Go Down in History as Barbarians
21st Century Icon: Vox Lux Director Brady Corbet Used Dogme 95 and Super Bowl Cameras to Craft His Pop Epic